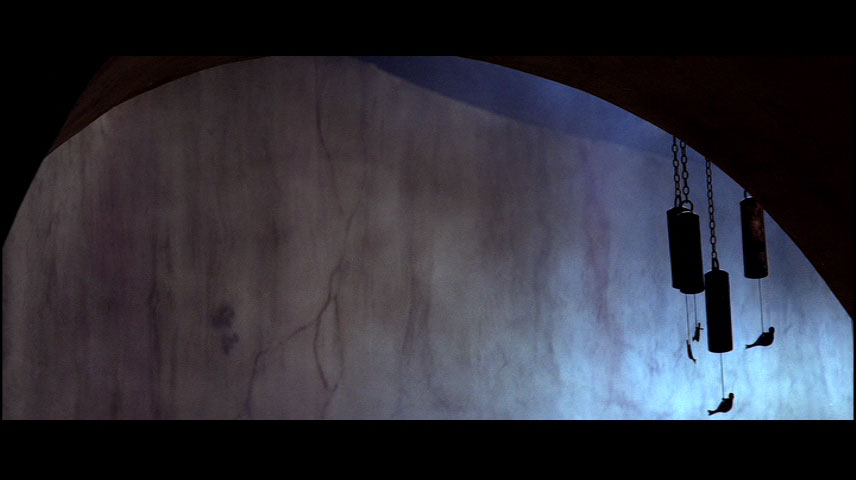 This raises so many questions. Aside from the obvious stupidity of a woman who is supposedly capable, coordinated and experienced in guerrilla warfare tactics bumping into the one object in the room which is guaranteed to make a lot of noise (and which, as you can see above, was quite visible and easy to avoid), the larger question is why on earth there's a wind chime hanging inside the palace? Aren't wind chimes supposed to hang outside in order to, you know, capture the wind and make a chiming sound?

For that matter, why would a tough, coarse mob boss like Jabba would even want a wind chime in the first place? He doesn't really strike me as a "chotchka" type of guy. I don't see him having a lot of lawn gnomes or a collection of porcelin figurines. Maybe some large marble sculptures or gargoyles to match Han in Carbonite, but that's about it.

Anyway, I made the mistake of looking it up, and of course, like everything else from Star Wars, Wookiepedia has a full entry on the subject:

Nar Shaddaa wind chimes were a type of traditional, wind-activated musical instrument constructed by the Hutts on Nar Shaddaa. They consisted of several metallic cylinders hanging on fine threads, in the middle of which would hang a Hutt-shaped piece of flattened metal. The wind caused the Hutt shape to move and waver, hitting the chimes and thus producing a metallic noise. The Nar Shaddaa wind chimes were a symbol of renewal in Hutt society.

Jabba Desilijic Tiure, the kajidii of the Desilijic clan, possessed a set of such windchimes, made of four tubes. That set was among the few possessions that Jabba brought with him when he moved the headquarters of his criminal empire from Nar Shaddaa to the sun-scorched world of Tatooine in 516 BBY. The Hutt had a throne room built in the subterranean level of a former monastery of the B'omarr Order, which became his palace. The crime lord's wind chime was hung in the archway of the main entrance to the throne room. It was still hanging there in 4 ABY, but Jabba's assassination that same year caused the palace and all it contained to fall into abandonment.

Wow. A full back story and everything. OK, so it's like a religious thing. Jabba is first shown smoking a hookah, so I guess there's some sort of Eastern mysticism theme here. Fair enough, but that raises an even bigger question: How the hell was this fine, delicate ornament, which almost certainly is supposed to be hand-crafted, created by the Hutts in the first place?

Seriously...look at Jabba's hands. Do those things look like they have the manual dexterity and fine motor skill coordination necessary to hand-craft something so fragile? 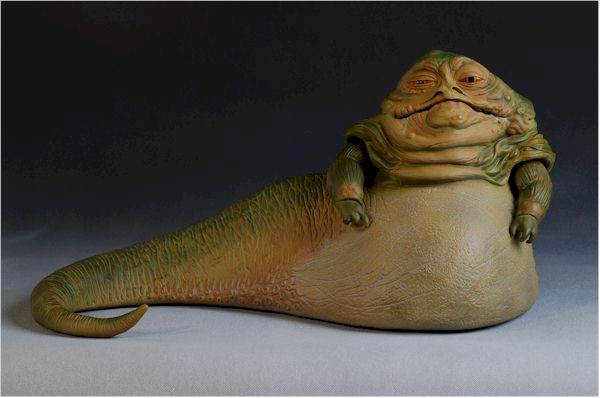 As for Leia bumping into it, I guess it didn't make much difference in the end as Jabba already knew what she was up to and hid, with his entire entourage, behind a big curtain to watch her free Han before pulling the curtain away like a reverse surprise party. Still, even that raises more questions. Jabba specifically states that Carbonite Han is his "favorite decoration" and that he "likes Captain Solo where he is". If so, why did he allow Leia to get that far in the first place? Why not nab her before she defrosts Han? Jabba doesn't appear to have his own Carbonite Freezing unit, so once Han is freed, he can't be re-frozen again, captured or not. I guess he just wanted to mess with Leia's head before forcing her to wear a gold bikini, chaining her to his dias and giving her a full-body tongue bath.

Anyway, even with the Ewoks and completely re-using the Death Star plot point just 2 movies after the first one, Jedi does still have a lot of awesome stuff, in particular the scenes between Luke, Vader and the Emperor in the final act. Just don't get me started on Leia's literal 2 seconds total of emotional reaction to being informed, out of the blue, that: a) The guy who captured and tortured her a year or so earlier was her father; b) the guy whose tongue was down her throat awhile later is her brother; and c) the guy who she's been trusting with every single top secret detail of the entire Rebel strategy turns out to be the son of the Rebellion's arch enemy.