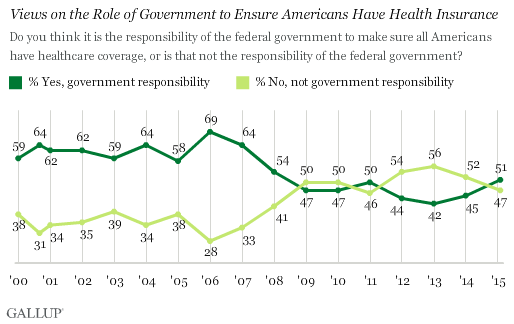 The percentage who feel the government should have this responsibility has increased across most key demographic groups since 2014, including lower-income Americans (+13 points), 50- to 64-year-olds (+12 points), Democrats and independents who lean Democratic (+9 points) and whites (+8 points). Across three of the country's four regions, this view has increased by seven points or more; the South is the only region where there has been no such change.

...Although U.S. adults lean toward the view that the government should ensure all Americans have healthcare coverage, they do not endorse a government-run system, which exists in most other Western nations. When given a choice, 55% say they prefer a system mostly based on private insurance, as the U.S. has now, while 41% would prefer a government-run system. The percentage favoring a private system is down from 61% last year.