I'm not sure how this press release slipped by me (it was posted quietly on Nov. 11th), but my eyebrows immediately shot up when I read the first bullet point...only to turn into eyerolls when I read the second one:

INDIVIDUAL/FAMILY ENROLLMENT As of November 7, 2015:

SHOP ENROLLMENT Cumulative as of November 7, 2015

However, the next bullet kind of deflates that balloon. All that's happened here is that the Rhode Island exchange is "auto-renewing" all current enrollees now instead of waiting until after December 23rd (RI, along with 3 other states, sets their enrollment deadlines 8 days later than most of the country). This is really just a logistical distinction, since every one of those current enrollees can still choose a different policy (or cancel it) between now and 12/23 if they wish. In practice it doesn't really make much difference in what the final QHP selection total ends up being.

This is doubly-interesting because last year, Rhode Island was the only state not to allow for automatic renewals (well, technically MA, MD, OR & NV didn't allow it either, but that's because they had no choice for technical reasons; all 4 states moved to completely different technologica platforms and didn't have the ability to import their 2014 databases). Rhode Island made a policy decision not to allow auto-renewals in order to encourage (force) people to shop around. It worked quite well (over 60% of enrollees switched policies, much higher than the national average), but I guess they had a change of heart this year anyway.

They also included these pie charts, although honestly, considering that 99% of these folks were autorenewed before even having a chance to switch to a new plan, I'm not sure how accurate the breakout will end up being: 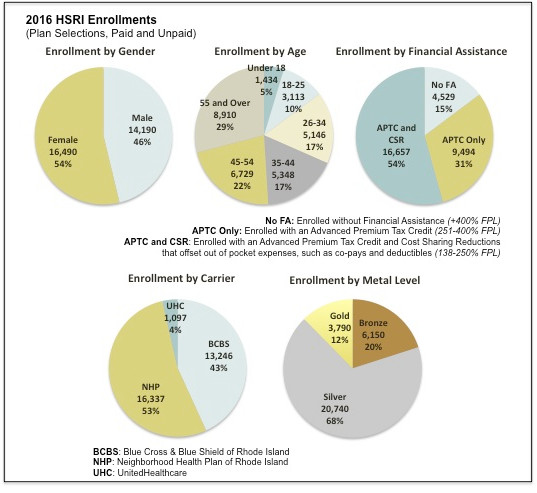 Rhode Island "front-loading" their renewals also means I really can't include their numbers when trying to make projections before 12/23, since they're the only state doing so; if I used RI's number to extrapolate from, it would make it look as though something like 9 million people signed up in Week One, which obviously isn't the case.

The only really usable number here is the 306 new QHP selections, which, from the wording above it ("nearly all are autorenewals") appear to be included in that 30,680 total.

In other words, it looks like the actual numbers are:

Again, if I'm reading this correctly, Rhode Island's number should start off at 30,680...but only add a few hundred more per week. The question is whether they can add another 5,600 by the end of January while not losing more than a handful of the renewals.

Put another way, unlike HealthCare.Gov, where I expect the QHP selection total to increase by around 85% from Week 1 to Week 2 (543K to 1.0 million), I don't expect HealthSource Rhode Island's 2nd week total to be mroe than perhaps 31,000 or so.