I was out of town over the weekend, visiting Alabama for my niece's Bat Mitzvah; then, when we got back it turned out our broadband connection had gone out (I'm currently at the library while waiting for the AT&T guy to show up).

In any event, a lot of big news happened over the past few days. The biggest non-healthcare-related stories, of course, were the horrific ISIS attacks in both Beirut (over 40 killed, over 200 wounded) and Paris (over 120 killed, over 300 wounded). My deepest sympathies to the people of Lebanon and France.

On the healthcare front, the two biggest stories were probably 1) the fact that the ACA is finally being discussed in both the Republican and Democratic debates and 2) a big NY Times story by Robert Pear about the high deductible problem with ACA exchange policies this year. Normally I'd have a lot to say in response to the High Deductible story, but Andrew Sprung of Xpostfactoid and Kevin Drum of Mother Jones have already taken care of that for me. The short answer: Yes, it's a problem for those over 250% of the federal poverty line, but if you're under 250% FPL, buy a Silver plan to resolve some/most of the issue.

As for the Democratic debate on Saturday night, from what I can tell from the transcript, there were only 3 noteworthy points which came out, the first two of which were already pretty well known (I haven't actually watched it yet):

As for Martin O'Malley, I haven't a clue what his thoughts are because, according to the transcript, he never really got a chance to say much about it:

QUESTION #3: Secretary Clinton, Americans say that health care costs and wages are their top financial concerns. And health care deductibles alone have risen 67% over the past five years. Is this something that Obamacare was designed to address? And if not, why not?

HILLARY CLINTON: Well, look, I believe that we've made great progress as a country with the Affordable Care Act. We've been struggling to get this done since Harry Truman. And it was not only a great accomplishment to the Democratic Party but of President Obama.

I do think that it's important to defend it. The Republicans have voted to repeal it nearly 60 times. They would like to rip it up and start all over again, throw our nation back into this really contentious debate that we've had about health care for quite some time now.

I wanna build on and improve the Affordable Care Act. I would certainly tackle the cost issues because I think that once the foundation was laid with a system to try to get as many people as possible into it, to end insurance discrimination against people with pre-existing conditions or women, for example, that, yes, we were gonna have to figure out how to get more competition in the insurance market, how to get the cost of particularly prescription drugs but other out of pocket expenses down.

But I think it's important to understand there's a significant difference that I have with Senator Sanders about how best to provide quality affordable health care for everyone. And it's-- it's a worthy debate. It's an important one that we should be engaged in.

QUESTION #3: Senator Sanders, a quick response and then we'll get-- into health care again later.

BERNIE SANDERS: I am on the committee that helped write the Affordable Care Act. We have made some good progress. Now what we have to take on is the pharmaceutical industry that is ripping off the American people every single day. I am proud that I was the first member of Congress to take American (UNINTEL) Canadian border to buy breast cancer drugs for 1/10 the price they were paying in the United States.

But at the end of the day no doubt the Affordable Care Act is a step forward. I think we all support it. I believe we've gotta go further. I wanna end the international embarrassment of the United States of America being the only major country on earth that doesn't guarantee health care to all people as a right, not a privilege.

...(transcript got a bit garbled/confusing here...I think they cut to commercial and then came back to healthcare later in the debate)...

NANCY CORDES: Back to healthcare by popular demand. First to you, Senator Sanders. You prefer to scrap ObamaCare and move to a single-payer system, essentially Medicare for all. You say you wanna put the private insurance companies out of business. Is it realistic to think that you can pull the plug on a $1 trillion industry?

BERNIE SANDERS: It's not gonna happen tomorrow. And it's probably not gonna happen until you have real campaign finance reform and get rid of all these super PACs and the power of the insurance companies and the drug companies. But at the end of the day, Nancy, here is a question. In this great country of ours, with so much intelligence, with so much capabilities, why do we remain the only (UNINTEL) country on earth that does not guarantee healthcare to all people as a right?

Why do we continue to get ripped off by the drug companies who can charge us any prices they want? Why is it that we are spending per capita far, far more than Canada, which is a hundred miles away from my door, that guarantees healthcare to all people? It will not happen tomorrow. But when millions of people stand up and are prepared to take on the insurance companies and the drug companies, it will happen and I will lead that effort. Medicare for all, single-payer system is the way we should go. (APPLAUSE)

HILLARY CLINTON: Well, the revolution never came. (LAUGHTER) And I waited and I've got the scars to show for it. We now have this great accomplishment known as the Affordable Care Act. And-- I don't think we should have to be defending it amount Democrats. We ought to be working to improve it and prevent Republicans from both undermining it and even repealing it.

I have looked at-- (APPLAUSE) I've looked at the legislation that Senator Sanders has proposed. And basically, he does eliminate the Affordable Care Act, eliminate private insurance, eliminates Medicare, eliminates Medicaid, Tricare, children's health insurance program. Puts it all together in a big program which he then hands over to the state to administer.

And I have to tell you, I would not want, if I lived in Iowa, Terry Branstad administering my healthcare. (APPLAUSE) (CHEERING) I-- I think-- I think as Democrats, we ought to proudly support the Affordable Care Act, improve it, and make it the model that we know it can be--

BERNIE SANDERS: Right. Well, let me just say something--We don't-- we don't eliminate Medicare. We expand Medicare to all people. And we will not, under this proposal, have a situation that we have right now with the Accordable Care Act. We've got states like South Carolina and many other Republican states that because of their right-wing political ideology are denying millions of people the expansion of Medicaid that we passed in the Affordable Care Act. Ultimately, we have got to say as a nation, Secretary Clinton, is healthcare a right of all people or is it not? I--

As for the core function of this site, as a reminder, I noted on Thursday the 12th that I'm expecting the 2nd Weekly HealthCare.Gov "Snapshot Report" (which should be released on Wednesday) to show roughly 1.0 million QHP selections via the federal exchange through Saturday, November 14th (plus another 330,000 or so via the state-based exchanges, although those obviously won't be included in the HC.gov report). If so, that would mean appx. 1.33 million QHP selections nationally though 11/14.

Given how swamped I am at the moment, I probably won't be posting much for the next day or so, but we'll see what the Wednesday report brings...and remember, as I noted the other day, the really significant dates are around 12/17 (when the January deadline/Autorenewals are added in) and 1/31 (the final deadline for 2016 coverage for most people). My being accurate or not before these dates has some significance, but mainly only for my self-satisfaction at making the calls. Again: I could prove to be dead on target 12 weeks out of 13 and still blow the last week significantly.

Having said that, here's what The Graph looks like as of today: 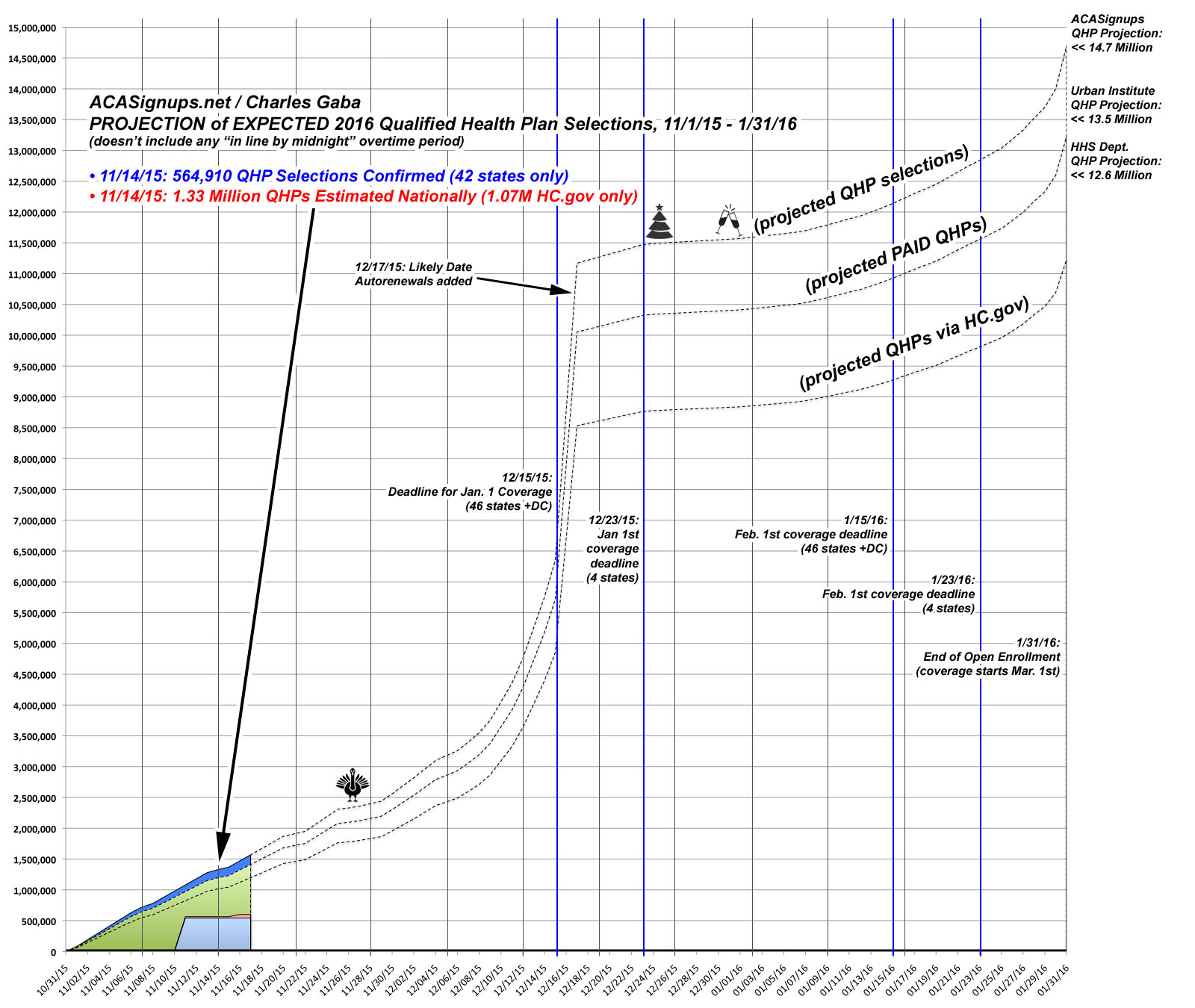