At least 4.8 million reasons why the GOP is scrambling to reverse itself on Medicaid expansion

The Republicans in two dozen states thought they were playing smart politics (with people's lives, but screw them, right?) when they denied Medicaid expansion, but this has since blown up in their faces, and has now become a potent issue for Democrats in several GOP-held states. I think I know why they thought this...and why it didn't work out the way they figured.

As far as I can tell, the Republican mindset was this: Poor people don't vote. Therefore, screwing over poor people = brownie points from the GOP base without any potential downside.

However, I think they forgot something important: Regular Medicaid might only apply to poor people, but the Medicaid expansion provided for by the ACA applies to many lower-middle class people...and they do vote (at least in greater numbers than the "dirt poor" anyway).

At the time, my bold-faced statement was based on more of a hunch than hard numbers, but I looked it up and, at least in 2012, here's how voter turnout broke out by income level according to the U.S. Census Bureau: 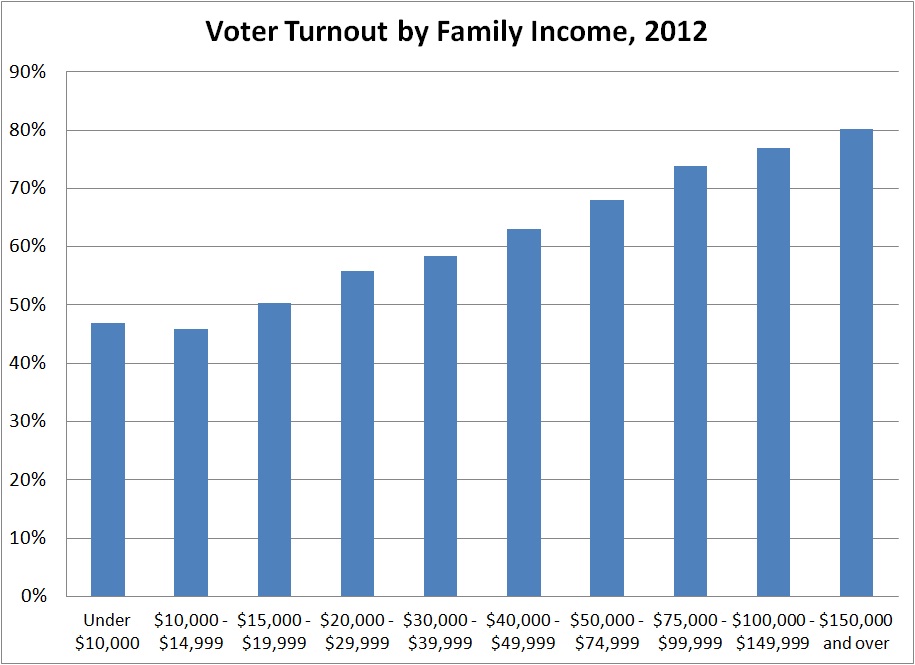 Now, this isn't an exact thing, because the pre-ACA expansion Medicaid/CHIP income thresholds were all over the map (and still are for the non-expansion states); it varied/varies by state, by income level and by status depending on whether it's a pregnant single mother, a newborn, a toddler, a teenager and so forth. Children under 18 were generally already covered up to a reasonable Federal Povery Level percentage. However, their parents were mostly SOL in many states (for instance, in non-expansion Alabama, parents of kids under 18 are only eligible for Medicaid if they make 13% of the FPL, which is just plain stupid, since that's only $30/week. I mean, seriously, you might as well just make it 0% at that point...which is exactly what most states appear to have been doing for parents without kids under 18: They weren't eligible at any income level.

So, OK; the Federal Poverty Level in every state except Hawaii & Alaska is $20,090 for a family of 3 (the average household size in the U.S. is 2.58 people). Let's assume that prior to the ACA's Medicaid expansion provision, virtually everyone on Medicaid fell into the first two brackets in the chart above (under $15,000/year, or around 75% FPL). The voter turnout among that crowd is around 45% on average.

So, what about Medicaid expansion? Well, in the states which have expanded it, it covers everyone up to 138% of FPL...or around $28,000/year. That basically amounts to the second and third brackets ($15K - $30K)...where voter turnout averages around 53%.

Not a huge leap, I suppose, but that's an 8 percentage point difference. How many people is that? Well, roughly 10 million people have gained Medicaid coverage via the ACA to date. The vast majority of them are adults, since kids were already covered via CHIP. How many eligible voters does that add up to? I'll assume around 9 million. Not all of them are registered (yet), of course, and some won't bother voting at all or will still vote Republican (hello, Kentucky!!), but that's still a hell of a lot of people who the GOP is risking pissing off next year, and at least 4.8 million of them are already likely to show up at the polls.

Assuming around 125 million people vote total (that was the tally in 2012), that's a good 4% of the total national vote...and a much higher percentage in some states. And that assumes, of course, that the 2016 turnout among the Medicaid expansion income bracket stays at around 53%; it could potentially be higher next year.

Total dysfunction isn't just for House Republicans, anymore. Mitch McConnell's promise to have a vote to repeal Obamacare and defund Planned Parenthood is turning out to be really not all that popular in his Senate Republican conference. It turns out, plenty of Republican senators actually care about their constituents, or at least their eventual reelection campaigns. The idea of Obamacare repeal—including Medicaid expansion—is a big problemfor some.

"I am very concerned about the 160,000 people who had Medicaid expansion in my state. I have difficulty with that being included," said Sen. Shelley Moore Capito, a Republican from West Virginia. […]

Sen. John Hoeven (R), who represents North Dakota, where an estimated 19,000 people gained access to Medicaid after Republican Gov. Jack Dalrymple decided to broaden the program, said he was unsure about repealing the expansion.

"We've started to talk about it but we haven't gotten into it in depth," he said. "I'm going to reserve judgment until I see exactly what we're going to do."

"I respect the decision of our Legislature and our governor on Medicaid expansion," said Sen. Steve Daines (R) of Montana, which has a Democratic governor. "I'm one who respects their rights and voices."

...This isn't just McConnell's immediate headache—it's a larger problem for the GOP. You see newly-elected Gov. Matt Bevin in Kentucky already backing away from an early campaign pledge to do away with the expansion. Just as remarkable, Alabama Gov. Robert Bentley is considering reversing course and accepting the expansion. This has all the potential to be a big flashpoint in the brewing GOP civil war, just what they need in an election year.