MAJOR UPDATE: Congrats, Kentucky! You just screwed 9% of yourselves out of healthcare coverage!

The population of Kentucky is just over 4.4 million people.

The number of Kentuckians enrolled in Medicaid specifically due to the Affordable Care Act's expansion provision is just over 400,000 people (418K to be precise, according to Emma Sandoe, who used to work for CMS).

By my math, that's a bit over 9% of the entire state's population which--assuming Republican Governor-elect Matt Bevin keeps his vow from the campaign--is about to be kicked off of Medicaid.

Ultimately, the blame lies with the voters for failing to care about their own interests, but I do want to say one thing about Democratic candidate Jack Conway's campaign.

Take a look at what I posted yesterday:

The only thing I'll add to this is that yes, the Democratic candidate, Jack Conway, does support KEEPING Medicaid expansion. While I have some issues with Conway on other subjects, when it comes to Medicaid expansion, he supports it...although I've gotta admit, when you look for "Medicaid" on his campaign site, all that comes up is his record on protecting Medicaid recipients from fraud/abuse as Attorney General...and there's no mention of Kynect at all. However, he has publicly stated in debates/etc. that he supports keeping both.

The moment I wrote that, I started to get a queasy feeling in my stomach, as this pretty much summarizes everything I've been reading about Conway's "do everything to pretend you aren't a Democrat"-style campaign...but I was holding out hope that Bevin would prove to be so unpleasant, even to Republicans, that Conway would squeak it out anyway.

Bevin won't be sworn in until January, of course, and assuming he does make good on his vow to repeal ACA Medicaid expansion, it would presumably have to jump through various legal/legislative/logistical hoops...but just for the sake of illustration, let's assume that he was sworn in tomorrow and managed to have full repeal go into effect as of December 1st, 2015. Here's a visual aid to see what that would look like: 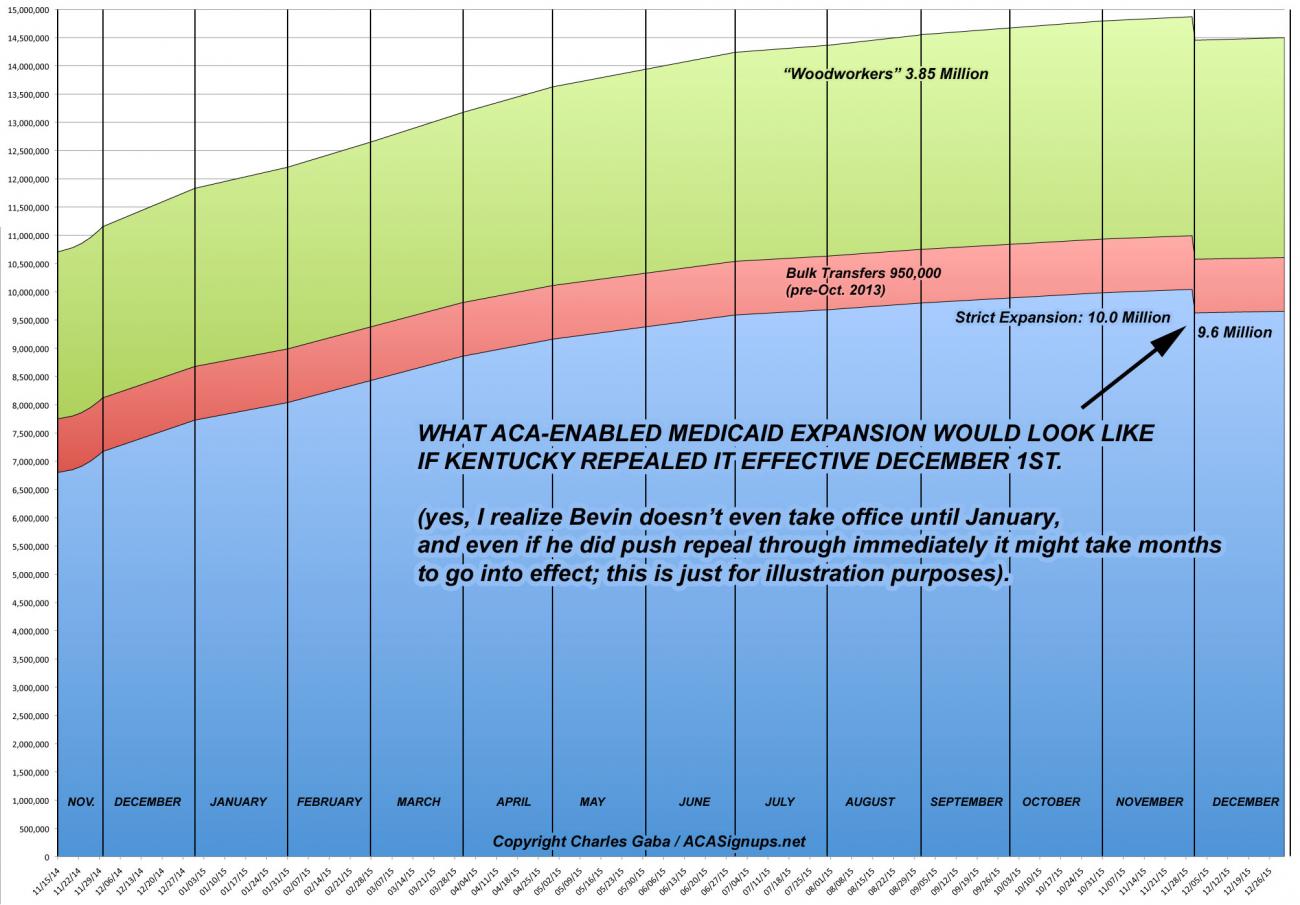 UPDATE: ...or perhaps not. Slate's Jordan Weissmann reports that Bevin is already starting to walk back his "full repeal" stance when it comes to Medicaid expansion:

John Oliver aired a pretty funny segment skewering Bevin's contradictory statements on what, exactly, he would do with the Medicaid expansion. But by now he has pretty clearly stated that he intends to seek a section 1115 waiver, similar to what states like Indiana and Pennsylvania have received, that would allow Kentucky to "experiment" with a more restrictive version of the program, probably involving more private insurance options. He explained his thinking at length during a September interview with Lousiville's NPR affiliate, WFPL.

We'll see what Bevin actually does (or tries to do...I'm not sure whether he'd have to fight with the state legislature, still weakly controlled by Democrats, or what). It's worth noting that Pennsylvania did implement a "waiver" version of Medicaid expansion which was cumbersome, complicated and inefficient...but that lasted all of a month or so before the incoming Democratic Governor, Tom Wolf, scrapped it and went with standard expansion, which has worked out much better.

Bevin would basically be doing the opposite of this--replacing a smoothly-operating, efficient program with what I'd imagine would be a clunky, jump-thru-hoops version for no particular reason (the alleged reason is to "save the state money" but the state will never have to pay more than 10% of the cost of expansion, and switching to a specialized program would have it's own additional maintenance costs as well, so I doubt it'd save a whole lot long-term...but what do I know?)

UPDATE x2: David Ramsey of the Arkansas Times, who's the "go-to" guy for all things ACA-related in AR, makes a similar argument that Bevin might follow a "Private Option" route similar to that of Arkansas:

Again, this is exactly the kind of rhetoric we have heard from Republicans in Arkansas. Bevin would "repeal" the hated Obamacare expansion and put a plan that "works for Kentucky" in its place. But note that his mechanism for doing this — seeking an 1115 waiver from the feds — is what states like Arkansas, Iowa, and Montana have used to add GOP-friendly bells and whistles to a coverage expansion funded by Obamacare. An 1115 waiver could allow him to pursue stuff like small premiums or co-pays for some beneficiaries, or work referral or wellness programs (though there are limits to what the feds will allow). But if Bevin wants to avoid kicking the hundreds of thousands covered by Medicaid expansion "to the curb," his version of "repeal" would add these wrinkles but keep the coverage expansion in place. Which is precisely what we're seeing right now in Arkansas, the one Medicaid expansion state prior to Kentucky last night that has had anti-Obamacare Republicans sweep into power.