UPDATED: Ut-oh...this may explain the discrepancy between HHS & my #OE3 projections...

Thanks to Esteban B in the comments for the reminder.

This morning I noted a New York Times article regarding a whole bunch of ACA exchange enrollees who either forgot to/didn't realize they had to file a federal tax return in order to keep receiving their Advance Premium Tax Credits or who did file their taxes but forgot to include the subsidy reconciliation form when doing so.

At the time, I was so astonished at the idea that people who are receiving federal tax credits would not only not realize that they had to file a return, but would actually get angry when informed that they had to do so, that I completely missed out on the larger implications.

Taking the emotional/"human interest" side out of the equation, here's the numbers in question:

In July, the Internal Revenue Service said 710,000 people who had received subsidies under the Affordable Care Act had not filed tax returns and had not requested more time to do so.

If those people do not return to the marketplace this fall, they may be automatically re-enrolled in the same or similar health plans at full price. And when they receive an invoice from the insurance company next year, they may be shocked to see that their subsidies have been cut to zero.

The I.R.S. also said 760,000 taxpayers had received subsidies and filed returns but had not attached the required form comparing the subsidies paid with the amount they were entitled to receive. Taxpayers describe that document, I.R.S. Form 8962, as daunting.

The wording of the article seems to be pretty clear that the two groups don't overlap; that's 710K who didn't file at all, plus another 760K who filed but forgot the form. That's up to 1.47 million people who a) were enrolled in ACA exchange policies as of last spring and b) were receiving tax credits. According to the CMS division, there were 8,656,210 people receiving APTC as of March 30th...so, assuming I'm reading this correctly, the IRS is saying that a whopping 17% of them are at risk of losing their subsidies if they try to renew their policies for 2016. OUCH.

OK, so what's the good news? Well, according to the Times:

The I.R.S. sent letters this summer to more than a million people who had received advance payments but had not filed tax returns, including some who had filed for an extension.

“If you do not file a 2014 tax return,” the letters said, “you will be responsible for the full cost of your monthly premiums and all covered services” in 2016, and the government may try to recoup some or all of the subsidies paid in advance in 2014.

The I.R.S. told consumers to file their tax returns as soon as possible to protect their eligibility for insurance subsidies. If consumers filed their returns late, it may cause an interruption in subsidy payments.

People who lose their subsidies on Jan. 1 may, in some cases, have them restored if they go to HealthCare.gov, attest to having filed tax returns for 2014, and are found eligible for financial assistance before the open enrollment period ends on Jan. 31. However, if consumers take these steps in the last two weeks of January, their subsidies will not resume until March 1, officials said.

If consumers attest, under penalty of perjury, that they filed their tax returns, and if they select health plans by Dec. 15, they can keep subsidies for coverage starting Jan. 1.

The Obama administration and a small army of insurance counselors are getting ready to assist people who may lose subsidies because they failed to “file and reconcile” their 2014 tax credits.

Hmmmm...OK, so the first question before the court is this:

In other words, let's assume that around 9.7 million people are still enrolled in time to renew their policies for 2016 in the first place. There's a 2 million-person gap between that and the 11.7 million who selected QHPs last spring. What percentage of that 2 million gap consists of people who never filed their taxes (or forgot the required form)?

I have no idea, but I'm willing to bet that those who have never filed a federal tax return before are probably far more likely to also be among those who drop their coverage in the middle of the year for any number of other reasons. Perhaps that's just snobbishness on my part; I don't know.

In other words, it's possible that a good chunk of those 1.47M have already dropped off the map, so to speak, and aren't even part of the equation anymore...but whether this is 50K, 500K or a million of them, I haven't a clue.

The second question is a two-parter:

Let's assume that half of them have done so since this summer; that still leaves about 730,000 people who are likely to be hit with full-price premiums...and these are generally not people who can afford to pay full price.

Whatever that number is, that's probably a big part of the reason why the HHS Dept's guidance for 2016 exchange enrollment is so much lower than mine. Take another look at the first line of the comparison table between HHS and myself: 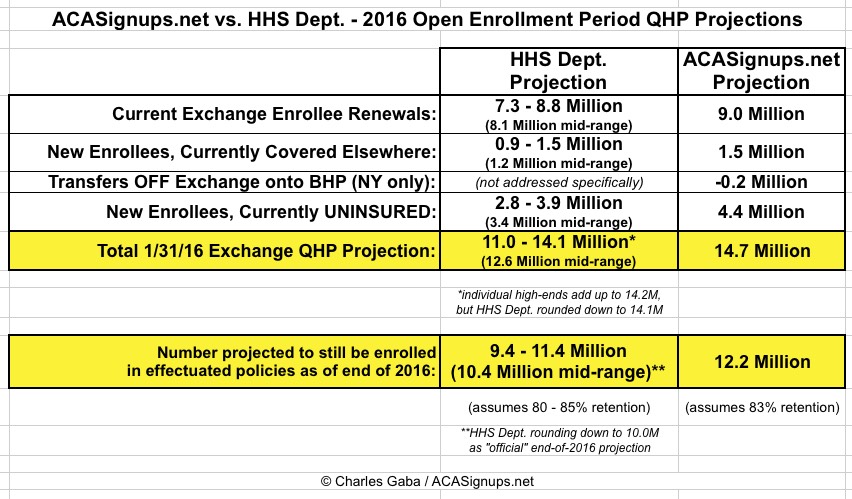 HHS is assuming anywhere from 7.3 million - 8.8 million current enrollees will renew their policy (midrange of 8.1 million). I'm assuming that about 9 million even will do so...anywhere from 200K - 1.7 million more than they're projecting.

If barely any of those 1.47 million have taken action, that could easily account for, say, 1.3 million fewer renewals this time around.

On the other hand, if a good 80-90% of these folks have gotten their paperwork squared away since last spring, then this may prove to be a non-issue, with only 100K or so having problems (not that this would be good for those 100K either, but you get my point).

UPDATE: Hoo, boy. Esteban B (who also called this issue to my attention in the first place) has also pointed out another troubling possibility: What if the "710,000" and "760,000" figures refer to the number of tax returns which were never filed/missing form 8962, not the total number of people represented by those tax returns?

In other words, we could be talking about 1.47 million households, not people enrolled in exchange coverage. The average household size in the U.S. is about 2.6 people, but that doesn't necessarily mean 2.6 people per return, since some married couples file separately and so forth. Even so, I could easily see there being 1.5 - 2.0x as many people represented by the 1.47 million number. IF that's what it's referring to, then we could be talking about 2.5 - 3.0 million at risk of losing their tax subsidies (and therefore, who are likely not to renew their coverge at all), which would easily explain HHS's dampened projections even further.

However...I don't know if that's what it means. Here's the original letter itself sent from the IRS Commissioner to Orrin Hatch, the Chairman of the Senate Finance Committee from July 17th. Here's the wording of the relevant part:

I actually addressed this "people" vs. "households" vs. "returns" confusion back in July, except back then I was focusing on how many "people/households/returns" ended up having to pay the individual mandate penalty. The wording at that time made it sound like the 7.5 million who had to pay actually represented around 16 million people.

In this case, the wording is just as fuzzy. If 710K/760K refer to the total number of covered lives, fine; it's a problem, but no worse than what I described in the original version of this post. If, however, there are actually 2 - 3 million current enrollees who are in jeopardy of losing their APTC/CSR tax subsidies, then this could be pretty unpleasant.

Of course, the IRS (and presumably HHS Dept?) could clear all of this up by posting an update on just how many people (total) who are currently enrolled in ACA exchange policies never did get around to filing their taxes and/or filling out/turning in form 8962.