The reason I mentioned the DAKOTACARE factor is this: As I noted back in July, there's nearly 2 million ACA exchange enrollees (well, more like 1.8 million now due to attrition) with incomes between 100-138% of the Federal Poverty Line. Due to an odd overlapping quirk in how Medicaid expansion works, people over 100% of the FPL are eligible for federal tax subsidies to buy private insurance via the ACA exchanges...but the cut-off for Medicaid eligibility (in states which have expanded the program) is effectively 138% FPL.

That means that if every state expanded Medicaid, those 1.8 million people would actually be moved off of their heavily-subsidized private insurance and over to Medicaid proper. Ironically, this would result in exchange enrollment dropping by 18% relative to the 10 million who were enrolled as of June 30. 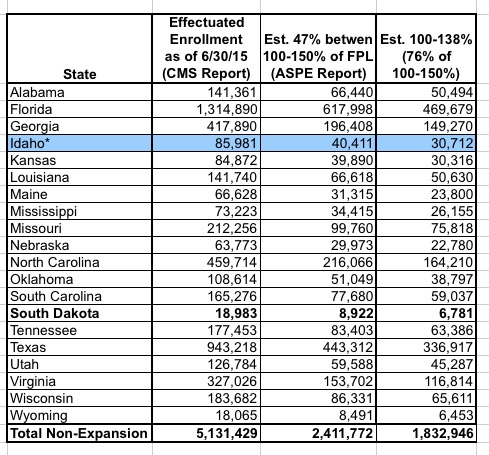 In South Dakota specifically, expanding Medicaid should mean that roughly 6,800 of the 19,000 residents enrolled via the exchange--a whopping 36% of the total--would likely be shifted off of their private policies over to Medicaid itself. The article linked to above estimates the total number eligible in SD at around 48,500; as far as I can tell, the remaining 41,700 are childless adults below 100% FPL and parents between 58% - 100% FPL.

(As an aside, it's insane to me that the cut-off for a parent is 58% FPL in the first place. The federal poverty line for a single parent of 1 child is $15,930. 58% of that is $9,240 per year, so a single parent earning $770 per month wouldn't be eligible for Medicaid, which is insane, though I presume they qualify for welfare and/or other related programs).

Of course, only around 23% of those on the individual market in South Dakota are enrolled through DAKOTACARE, and I don't know what proportion of those 6,800 in the 100-138% range are among them, but assuming an even spread among the insurance carriers, expanding Medicaid should provide an easy solution to around 1,600 of them.