However, with the King v. Burwell court case finally squared away (Medicaid/CHIP wouldn't have been directly impacted by an adverse ruling, but there was still tremendous amounts of media coverage about the ACA and low-income citizens, so I have to assume there was some residual impact), as the summer heat took hold, CMS's July report shows that additional Medicaid/CHIP enrollment has finally tapered off significantly:

For evidence of this, I need look no further than my own home state of Michigan. As of the end of March, the Wolverine state's "Healthy Michigan" program (aka, Medicaid expansion), which had been shooting quickly upwards for months, broke through the 600,000 enrollee mark.

In other words, the expansion program has finally hit 100% capacity in Michigan...and the same is true in many other states as well. Indiana didn't start their Expansion program until the end of January of this year and was already up to 290,000 as of July...83% of their estimated total eligible population. 206,000 have enrolled in New Mexico...21% more than estimated to be eligible, and so on.

As far as I can tell, the only way that Medicaid will continue to increase their enrollment numbers at this point will be for additional states to finally stop acting like children holding their breath until they turn blue and actually expand the program. Fortunately, there's some movement on this front:

Of course, these are all tiny states, and two of the three haven't agreed to anything yet, but it's still a positive sign in my book.

Now if only Florida, Texas and/or North Carolina would jump on board...

In any event, here's what Medicaid/CHIP growth looks like, including my own estimates of growth since July; as you can see, it's prettty much plateaued and likely now stands at around 13.7 million more than it did just before the ACA expansion started (click for higher-res version): 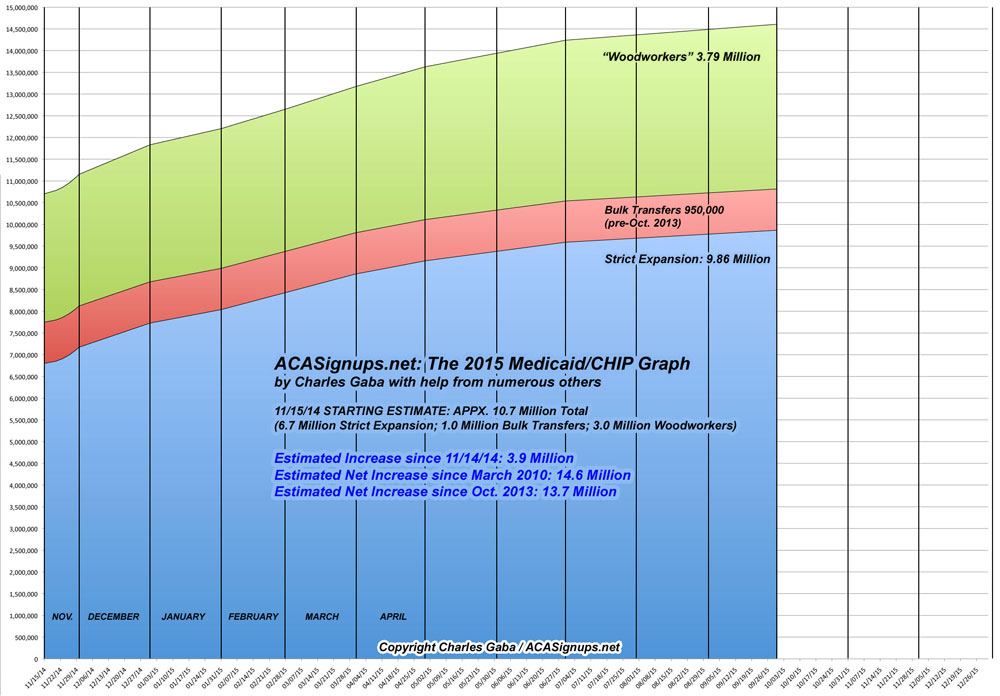 UPDATE: Thanks to Justin Hoca for bringing up two other factors which might lead to continued growth and/or less churn in Medicaid enrollment: