As always, once you're into the off-season, the total number of QHP selections is more of a symbolic milestone than anything, since the effectuated number is more significant...but it's the selections which cancel out attrition (whether voluntary, in the case of people not paying their premiums or moving on to other coverage; or involuntary, in the case of the several hundred thousand people kicked off of their policies due to legal residency verification issues).

After the recent CMS report revealed that a whopping 423,000 people were kicked off their plans for this reason in the first half of the year, I recalculated my attrition rate projection table accordingly. 423K over 6 months is around 70,000 per month. However, the vast buik of this should be out of the way, simply because around 12 million people had selected policies as of the end of April...but only around 1.6 million have done so since then. With that in mind, I'm assuming roughly 20,000 additional enrollees will be given the boot each month for residency & similar issues for the second half of the year (click image for high-res version). If I'm right, here's how things should play out:

Here's the Graph version of the above (again, click image for high-res). As you can see, the effectuated line is now more accurate, as the policies are generally active for a solid month at a time as opposed to getting cut off in the middle of the month. If I'm close, 2015 should close out with roughly 9.7 million people still enrolled in ACA exchange policies...before the whole thing starts all over again. 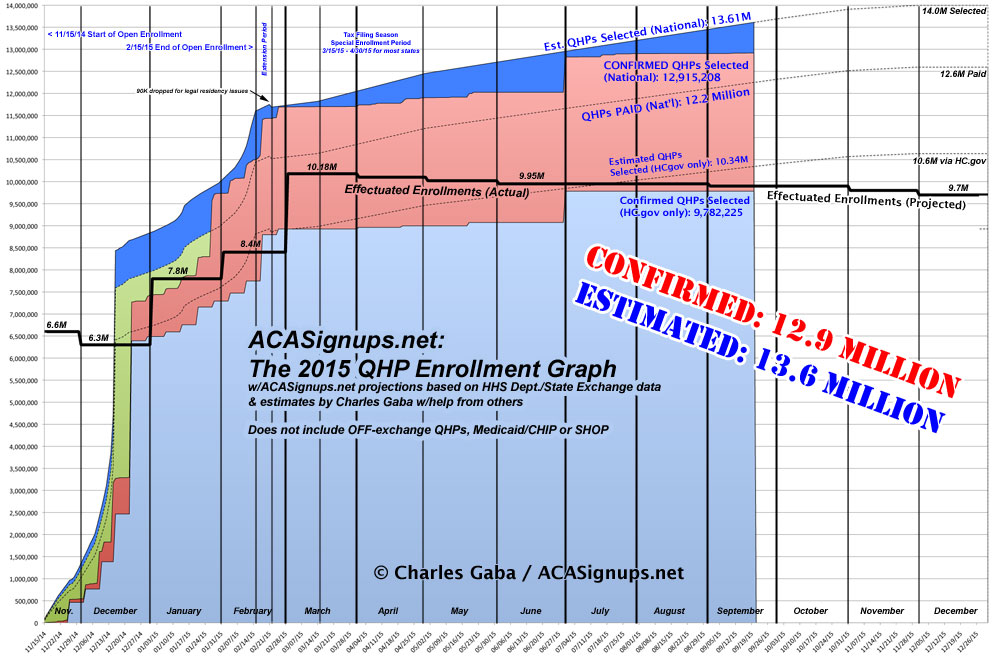