Well this was an unexpected, but welcome surprise: The U.S. General Accounting Office has just released a new report which finds...

As of 2014, key provisions of the Patient Protection and Affordable Care Act (PPACA) resulted in the establishment of health insurance exchanges in each state and changed how insurers determined health insurance premiums. Individual market consumers generally had access to more health plans in 2015 compared to 2014, and in both years the lowest-cost plans were available through exchanges in most of the 1,886 counties GAO analyzed in the 28 states for which it had sufficiently reliable data for plans offered either on or off an exchange. In addition, consumers in most of the counties analyzed had six or more plans to choose from in three of the four health plan metal tiers (bronze, silver, and gold) in both 2014 and 2015, and the percentage of counties with six or more plans in those metal tiers increased from 2014 to 2015. Consumers had fewer options regarding platinum plans, although the availability of platinum plans generally also increased from 2014 to 2015. The lowest-cost plan available in a county was available on an exchange in most counties. For example, among the 1,886 counties analyzed, GAO found that the lowest-cost silver plan for a 30-year-old was available on an exchange in 63 percent of these counties in 2014 and in 81 percent of these counties in 2015—an increase of 18 percentage points.

When I first read this, my initial reaction was to say, "Well, duh, of course the exchange plans are less expensive...84% of exchange enrollees are receiving federal tax credits to chop down their premiums!"

However, from what I can tell, the GAO report doesn't include the Advance Premium Tax Credits (APTC) at all; they're looking at the full price premiums in every case, both on and off the exchange.

Unfortunately, I wasn't able to find the average difference between "on-exchange vs. off-exchange" policies; either it's buried in the full report somewhere or there's too many variables at play to boil this down to a single number. Exchange-based policies could be a mere 0.1% less-expensive (barely worth noting) or they could be half the price (doubtful, but certainly newsworthy if true!). Even so, this still flies in the face of claims that it's "more expensive" to shop through the exchange if you're paying full price. Perhaps this news will encourage some people who have been enrolling directly through their insurance company to consider doing so via HealthCare.Gov/their state-based exchange this time around?

You can download the full data in Excel files for each state. For instance, here's Michigan:

Yes, this is extremely difficult to read, I know. Fortunately, it includes a lot of numbers which I don't really need. First, I'll kill off the 2014 rates because those aren't really relevant here:

Next, I'll scrap the Minimum and Maximum dollar amounts and stick with just the Median in each category...and then run an average of all 5 "consumer categories" for each metal level and exchange category: 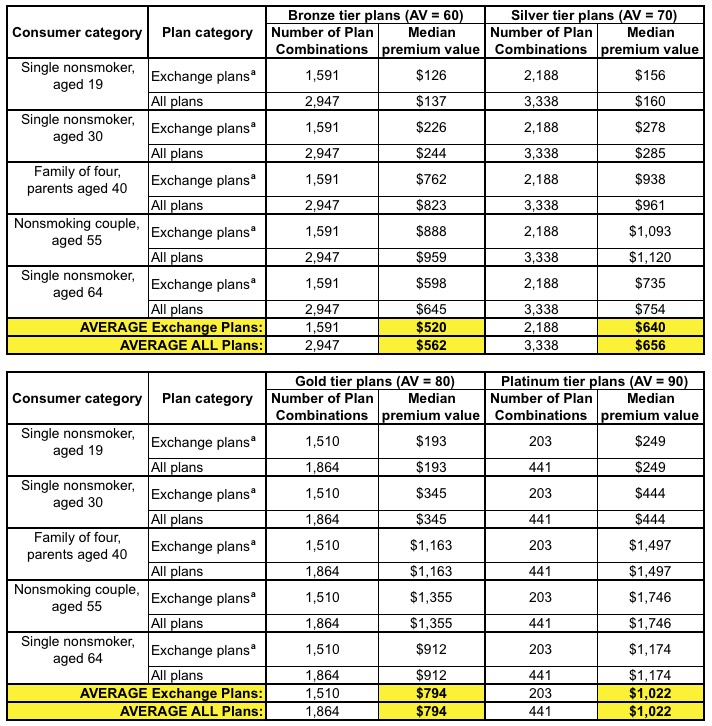 However, it's actually better than that (for Bronze and Silver). This compares exchange-based plans to all plans (including both on- and off-exchange). In order for the average of all Bronze plans to be $562, for instance, the off-exchange plans must average more than that, since the on-exchange ones are $520 on average.

Since there's nearly twice as many bronze plan combinations off-exchange as on-exchange (and 52% more Silver combinations), I'm not sure the best way to figure this last piece of the puzzle, but the point remains that in Michigan, Bronze and Silver plans are 7.5% and 2.4% less expensive through the exchange than they are directly through the company...and that's without any financial assistance.