During the fiscal year that ended June 30, 2014, the most recent for which data is available, Planned Parenthood affiliates around the country received $528.4 million in government funds (a combination of state, federal and sometimes local government dollars), according to the organization's ownannual report and information it's required to share with the IRS.

Jeb "The Smart Brother" Bush, just moments ago, explaining why he feels Planned Parenthood should be defunded nationally (as he did while Governor of Florida):

Jeb just now, inartfully? "I’m not sure we need half a billion dollars for women’s health issues."

As someone just noted on Twitter, that's just $3.15 per woman.

Put another way, the federal minimum wage is currently $7.25 per hour.

Jeb Bush apparently "isn't sure" whether a woman's health is worth what a teenager earns in 26 minutes flipping burgers. 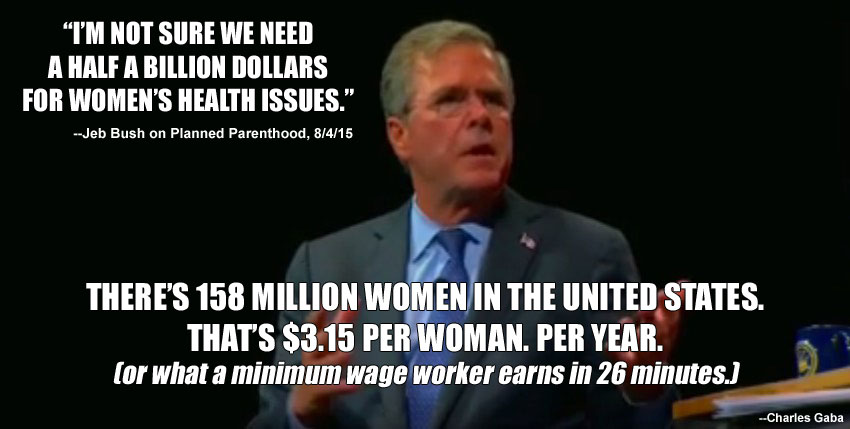 (and if you think that this is "off-topic" for this site, you should really think it through...)

UPDATE: Within just an hour or two of this, the backlash against Jeb! was severe enough that he issued a "statement" to "explain" what he really meant (emphasis mine):

Gov. Jeb Bush issued the following statement regarding his comments on federal funding for Planned Parenthood.

“With regards to women’s health funding broadly, I misspoke, as there are countless community health centers, rural clinics, and other women’s health organizations that need to be fully funded. They provide critical services to all, but particularly low-income women who don’t have the access they need.

“I was referring to the hard-to-fathom $500 million in federal funding that goes to Planned Parenthood – an organization that was callously participating in the unthinkable practice of selling fetal organs. Democrats and Republicans agree we absolutely must defund them and redirect those funds to other women’s health organizations.”

Hmmmm...so Bush has no problem at all with federal or state funding for women's healthcare as long as it's not used for abortion services...which it isn't, because Planned Parenthood uses a separate fund for that, which make up just 3% of their total services:

But what is unclear is whether Bush knows that federal funding for abortion is already prohibited through the Hyde amendment, a policy that’s been in place since the 1970s and that has been disastrous for low-income women. Some have argued that defunding Planned Parenthood would actually increase the number of abortions, as the organization provides so many crucial women’s health services to prevent pregnancy.

In addition, of course, there's the tiny little thing that Planned Parenthood hasn't been "selling fetal organs" or doing anything else illegal. It's perfectly legal to donate fetal tissue for medical research with the consent of the patient, and it's perfectly legal to be reimbursed for the handling and shipping expenses of doing so. The videos in question have been thoroughly debunked as having been severly edited to falsify what the PP employees were saying.