The Office of the Inspector General released a big report today which confirms what most healthcare/ACA observers have known for awhile now: The CO-OP organizations established by the ACA across 2 dozen states to help increase competition and keep the private, for-profit insurance companies (somewhat) honest...haven't been doing very well overall.

One of these (CoOportunity, which operated in Iowa and Nebraska) seemed to be kicking ass in 2014...but ended up being liquidated by the end of the year. A second, operating in Louisiana, just announced that they're shutting down operations by the end of this year. As the OIG report notes, most of the 21 other CO-OPs nationally aren't doing so hot...and they used an absurdly long title (with an absurdly New York Post-style font size) to say so: 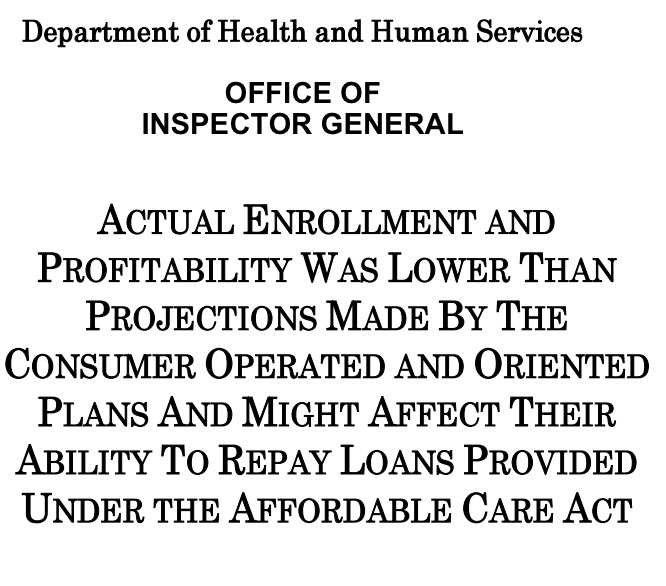 Here's the summary of their findings and recommendations:

Most of the 23 CO-OPs we reviewed had not met their initial program enrollment and profitability projections as of December 31, 2014. Each CO-OP submitted a loan application that included details on its annual projected number of enrolled members and projected net income. Specifically, member enrollment for 13 of the 23 CO-OPs that provided health insurance in 2014 was considerably lower than the CO-OPs’ initial annual projections, and 21 of the 23 CO-OPs had incurred net losses as of December 31, 2014. Year-end net income data were not available for the Iowa/Nebraska CO-OP as the Iowa Insurance Commissioner took control of the CO-OP in December 2014 because of financial concerns. The Iowa/Nebraska COOP was liquidated in March 2015.

The low enrollments and net losses might limit the ability of some CO-OPs to repay startup and solvency loans and to remain viable and sustainable. Although CMS recently placed four CO-OPs on enhanced oversight or corrective action plans and two CO-OPs on low-enrollment warning notifications, CMS had not established guidance or criteria to assess whether a CO-OP was viable or sustainable.

There is some good news in the report, however:

The Maine and South Carolina CO-OPs each exceeded their enrollment and profitability projections as of December 31, 2014. In Maine, only two insurance companies, including the CO-OP, offered health plans on the marketplace. The Maine CO-OP had the lowest priced health insurance plans in nearly every category and had attracted approximately 80 percent of marketplace consumers in Maine.

I wrote about the Maine CO-OP, Community Health Options, earlier this week; it seems to be one of the few CO-OPs doing exactly what they're supposed to:

...Emily Brostek, executive director of Consumers for Affordable Health Care, a health advocacy group, said Community Health Options’ domination of the marketplace is helping to suppress prices. The cooperative wants to maintain its commanding market share, and the other insurers must aggressively price to have a shot at knocking the cooperative off its perch.

...Some studies have shown that states with cooperatives – which is a member-run nonprofit – have successfully kept premiums lower than states that don’t. About half of the states have a cooperative.

The cooperatives were created under the Affordable Care Act as a way to provide competition to traditional insurance companies, with federal loans to help the co-ops get off the ground. Maine’s co-op received a $65 million loan. The cooperative’s governing board must include enrollees, who make up a majority of the board.

Still, I can't help but be pretty disappointed in the report overall. Many ACA supporters were hoping that the CO-OPs would act as a sort of under-the-radar version of the "Public Option" which was bandied about during the contentious healthcare battle of 2009-2010. It looks like this is only working out for a couple of states so far.