UPDATE: NY Times shows same level of professionalism as the Detroit News. That's not a compliment.

So, late last night the New York Times posted another story about Hillary Clinton's email which included this headline...

Criminal Inquiry Sought in Hillary Clinton’s Use of Email

...and this lede passage:

"...into whether Hillary Rodham Clinton mishandled sensitive government information on a private email account she used as secretary of state."

An hour or so later, they changed the headline to this...

..and the wording of the passage was changed to this:

"...into whether sensitive government information was mishandled in connection with the personal email account Hillary Rodham Clinton used as secretary of state."

However, according to Politico (as well as a whole mess of reporters via Twitter), as of this morning...

As of early Friday morning, the Times article contained no update, notification, clarification or correction regarding the changes made to the article.

After a lot of criticism, the NY Times finally added this correction notice around 3pm:

The Justice Department said Friday it has been asked to investigate the “potential compromise of classified information” in connection with the private e-mail account that Hillary Rodham Clinton used while serving as secretary of state.

A statement issued by the Department said it had received a “referral” on the matter, although it did not say who originated it.

“It is not a criminal referral,” the statement said.

Unfortunately, as of 8:20pm EST the next day, the NY Times headline still reads...

This is just the start of the mess, however. Over at Newsweek, Kurt Eichenwald has done an amazing job of systematically tearing apart the rest of the NY Times story, piece by piece. It's pretty jaw-dropping.

So had the Times mixed up a criminal referral—a major news event—with a notification to the department responsible for overseeing FOIA errors that might affect some documents’ release? It’s impossible to tell, because theTimes story—complete with its lack of identification of any possible criminal activity—continues to mention a criminal referral.

But based on a review of documents from the inspectors general, the problems with the story may be worse than that—much, much worse. The reason my last sentence says may is this: There is a possibility—however unlikely—that theTimes cited documents in its article that have the same dates and the same quotes but are different from the records I have reviewed. I emailed Dean Baquet, the Times’s executive editor, to ask if there are some other records the paper has and a series of other questions, but received no response. (Full disclosure: I’m a former senior writer for the Times and have worked with Baquet in the past.)

This story is still playing out, and no doubt there will be more revelations, but it sure reminds me an awful lot of this much smaller-scale incident at the Detroit News a couple of months ago: 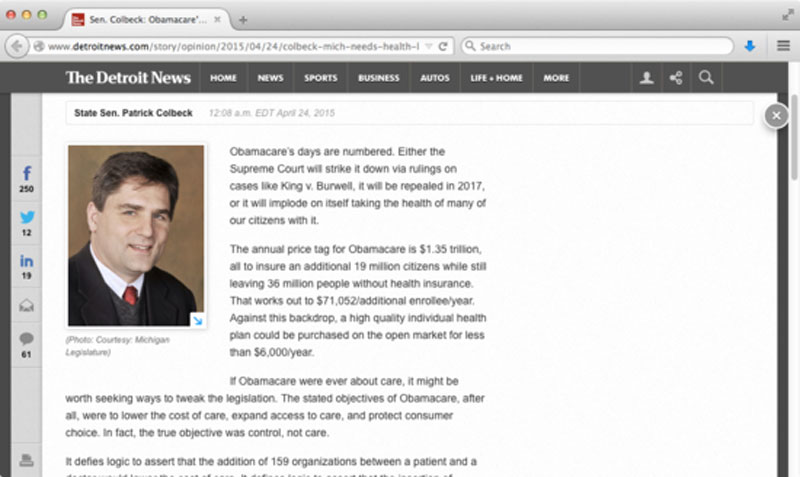 As you may recall, after I wrote about this pack of lies on this site, I also submitted my own Op-Ed rebuttal to the Detroit News, but never heard back from them about it.

Then, a few days later, it turned out that the News went back in and made (partial) corrections to (some) of the more glaring errors...without including any sort of correction notice (not to mention scrubbing all of the comments from the original version). 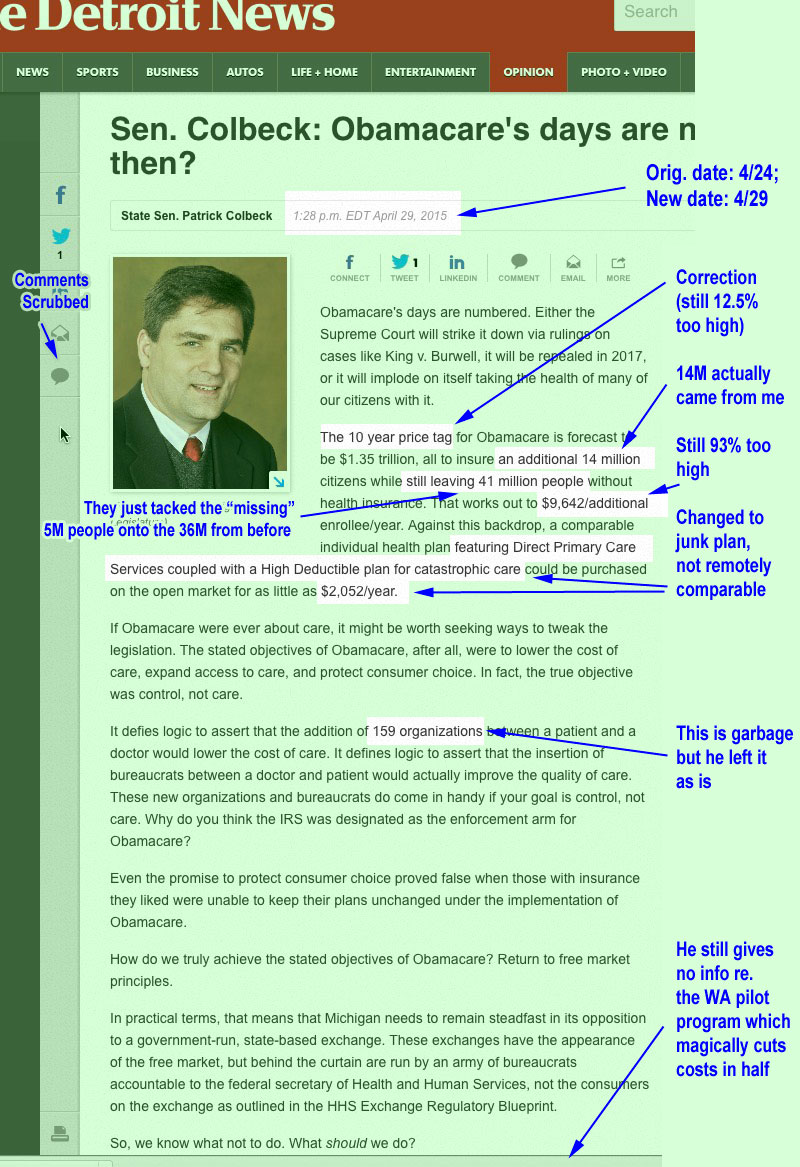 Then, after further criticism by myself and others, the News finally posted a correction notice...which itself was still misleading (and without correcting some of the factual errors which had been pointed out earlier).

Now, there are, of course, many differences between the two situations. The Detroit News let Sen. Colbeck's BS Op-Ed sit for 10 days before making any corrections, while the NY Times made at least a partial correction within an hour or so of the story being published.

The problem is that the Times "error" is an infinitely bigger deal on a lot of levels:

I've obviously made factual errors myself from time to time, but I generally try to correct them ASAP when they're brought to my attention and I have no problem with admitting a screw-up. Just this morning I originally thought that BCBS of Texas was the only one offering PPO policies anywhere in the state, when it turns out that Cigna does offer them in some areas. In that case, I only had to change "will have to" to "may have to" in the headline....and noted the correction a few moments afterwards via Twitter

I'm obviously not trying to compare myself to a real journalist like Eichenwald. At the same time, I've spent the past nearly two years doing my best to provide accurate, real-time enrollment and related data for the Affordable Care Act, debunking mountains of bullsh*t along the way. Usually I do a pretty good job, sometimes I mess up. But I'm an unpaid blogger. This is the New York Friggin' Times. Depressing.

My larger point is that the news is often hard enough to understand and interpret when journalists, editors and outlets are trying to do their jobs properly, much less when people gum up the works on purpose.*

*(my own correction 8:54pm: I have no proof that the Times story was messed up on purpose)

UPDATE: 12:54pm 7/25: Well there you go: 34 hours or so (and millions of page views) later, the Times has finally removed "Criminal" from the headline (h/t to nycsouthpaw):