On top of this morning's excellent news from Gallup that the total number of uninsured U.S. adults dropped another 1.2 million people in the 2nd quarter of 2015 (0.5% of adults 18 & older = 0.5% out of appx. 245 million adults = around 1.2 million), the polling firm has released another data drop regarding approval/disapproval of the law, post-King v. Burwell: 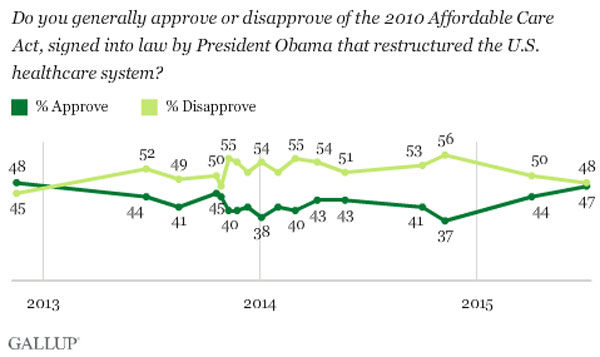 On the surface, this isn't really that jaw-dropping; several other national polls have found similar trends, and the Kaiser Family Foundation's most recent survey actually has approval slightly outpacing disapproval. Still, it's always good to see confirmation from another respected source.

In addition, while the Kaiser survey included a fairly large "Don't know/Refused to answer" contingent, Gallup seems to be more forceful about getting leaners to commit: The latest survey only has 5% unlisted.

While approval is still below 50%, that's hardly surprising given the highly polarized populace...and check out that trend line since last November (right after the ugly midterm elections): Approval is up 10 points, while disapproval is down by 8, for a total positive "swing" of 18 points in the ACA's favor. It's amazing how much of an impact not having major technical meltdowns can have...