UPDATED: So who actually DOES fall into the Medicaid Gap?

Yesterday I noted that one of the great ironies of 21 Republican-controlled states still not expanding Medicaid via the Affordable CAre Act is that expanding the program would actually damage the ACA in a different way...because 1.9 million people currently enrolled in private ACA exchange policies would instead be shifted over to Medicaid, thus lopping a whopping 18% of exchange QHP enrollees off the tally.

This led to a bit of confusion about just who does and doesn't fall into the "Medicaid Gap"...that is, people who don't qualify for Medicaid, but also don't make enough money to qualify for federal tax credits to enroll in private policies via the ACA.

...in states which expanded Medicaid, households earning less than 138% of the Federal Poverty Level (FPL) are eligible for Medicaid; anyone from 138% - 400% are eligible for federal tax credits to enroll in private Qualified Health Plans (QHPs) via the ACA exchanges.

OK, so the 100-138% non-expansion state folks have been accounted for. These people would likely be better served by Medicaid than even the heavily-subsidized private policies, but hey, at least they're covered; this is not who "the Medicaid Gap" refers to.

The Kaiser Family Foundation has been keeping careful track of exactly who makes up the Medicaid Gap population, updating it occasionally as populations shift and especially as additional states cave and expand Medicaid after all. Their most recent update, from back in April, has the tally at around 3.7 million across 21 states (Montana has agreed to expand Medicaid but their version of the program hasn't been fully approved by the HHS Dept. yet).

To understand why these 3.7 million people are caught in this situation, you have to understand that the eligibility threshold for Medicaid varies widely from state to state. Until I started tracking all of this stuff nearly 2 years ago, I naively assumed that anyone below 100% of the Federal Poverty Line automatically qualified for Medicaid, and that all the ACA did was bump up the threshold from 100% to 138%.

Needless to say, I was very, very wrong. It turns out that there are actually eight different categories of residents with a wide range of eligibility standards in most states...some of which are downright draconian for adults.

For instance, in the state of Alabama, children are eligible for Medicaid up to 141% of the FPL and for CHIP up to 312% of FPL, and pregnant women qualify for Medicaid up to 141% FPL as well, all of which is quite reasonable. However, other adults are pretty much told to go pound sand: Parents are only eligible up to 13% FPL (which basically means $1,530/year for a single parent or $2,070 for a couple...which in turn basically means "forget about it"), while adults without children aren't eligible under any circumstances.

I want to repeat that: A single parent in Alabama only qualifies for Medicaid if they make less than $30 per week. How do you even record that as "income"? I mean, don't get me wrong, I'm sure the handful of people in that range appreciate it, but really, why did the state even bother at that point? What, 14% would have broken the bank, but 13% is just right?? Sheesh.

Anyway, here's the full state-by-state breakdown of the income thresholds for every state. Note that the "133%" numbers for "Other Adults" and "Parents" exist almost entirely thanks to ACA expansion (also note that the "133%" basically means "138%" for reasons I note in the update to yesterday's entry): 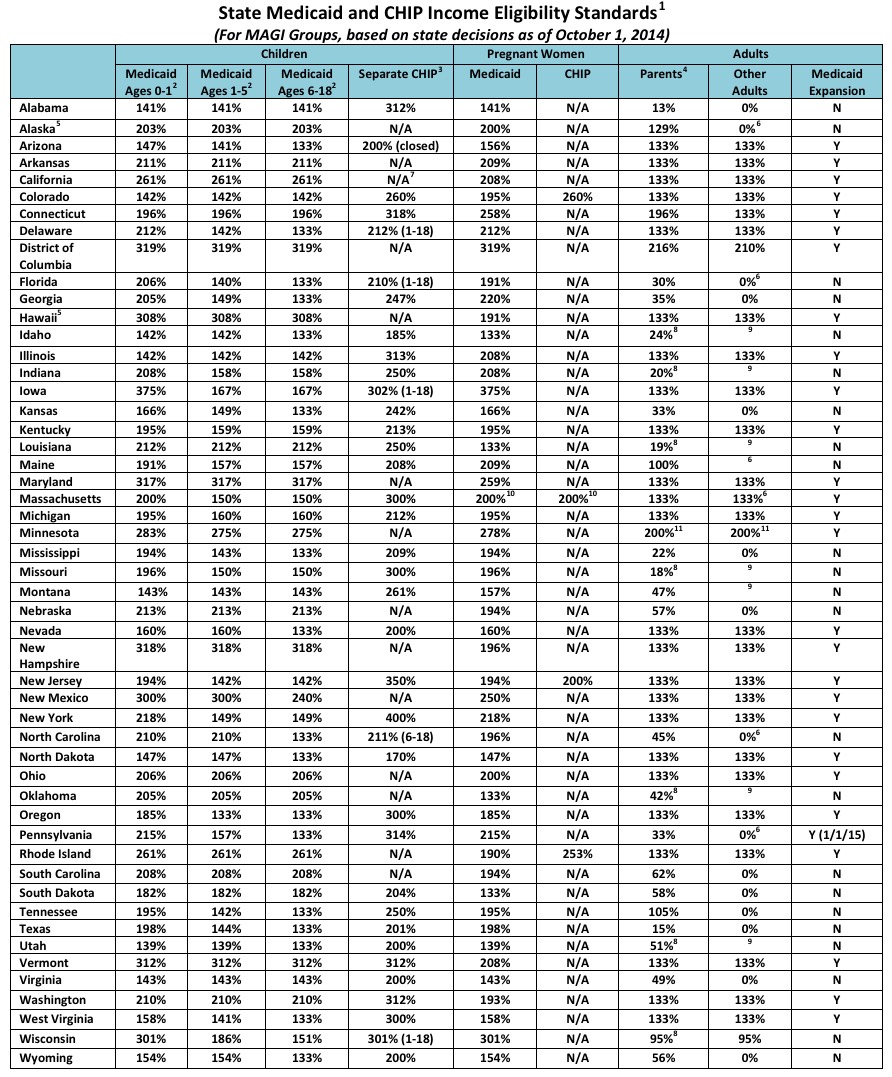 The 3.7 million people in the Medicaid Gap basically consists of all of the cells above which are less than 100% (exception: Pennsylvania has since expanded Medicaid, while Montana, as noted earlier, is in the process of doing so).

As for the absurd range of percentages here, I realize every state has to tweak the numbers for budgetary reasons from time to time, but it seems insane not to at least keep the numbers consistent. Look at Delaware: 212% for newborns, 142% for 1-5 year olds and 133% for 6-18 year olds. That's crazy. Pick a percentage and stick with it, guys. Sheesh.

Anyway, I hope this helps shed some light; it might have been obvious to long-time healthcare wonks, but a lot of people like myself had no idea how many different categories or thresholds there are.

UPDATE: I forgot to include the footnotes referred to in the table above; here they are... 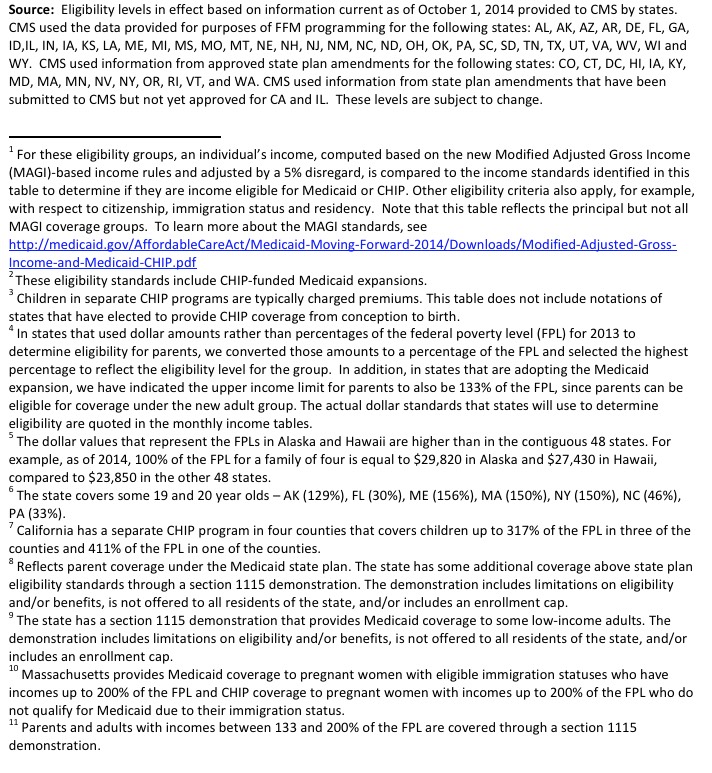 UPDATE 9/8/17: I've updated the eligibility table with the most recent version from the Medicaid website: 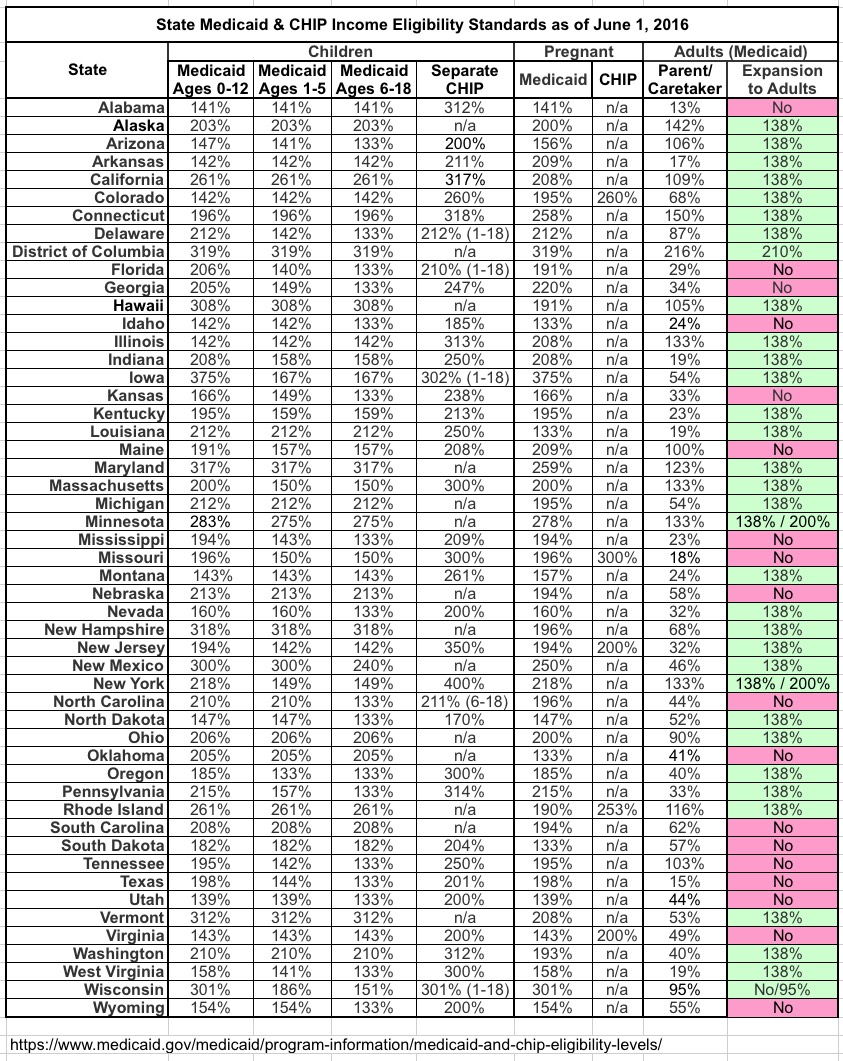