Last week another healthcare reporter and I (I think I do count as a "reporter" by now, yes?) were discussing the fact that some of the 10.3 million people currently enrolled in private policies via the ACA exchanges would be eligible for Medicaid instead, if their states would simply expand Medicaid via the ACA.

How is this? Well, in states which expanded Medicaid, households earning less than 138% of the Federal Poverty Level (FPL) are eligible for Medicaid; anyone from 138% - 400% are eligible for federal tax credits to enroll in private Qualified Health Plans (QHPs) via the ACA exchanges.

How many of these people are there? Well, I started with the official CMS division report released in early June, which gave the effectuated enrollees in every state as of March 31st (10,187,197 nationally).

Next, I added another 1.8% to each state. Why? Because of #ACATaxTime...the tax filing season special enrollment period, in which appx. 214,000 additional people selected QHPs nationally. Since those policies didn't go into effect until after March 31st (either April 1 or May 1), they have to be added to the total. That's an increase of 1.8% over the 11.7 million QHPs as of 2/22/15. Of course, not all 214K actually paid their premiums or are still effectuated, but proportionately it should be roughly the same: 1.8% higher than the 3/31 total for each state. That's a total of around 5.48 effectuated enrollees in non-expansion states as of June.

Next, how many of these people are in the 100-138% FPL range? The good news is that the HHS Dept's ASPE report does break QHP selections out by income range for HC.gov states, including non-expansion states specifically (it doesn't include Idaho since ID isn't on HC.gov anymore, but their number is small enough that any discrepancy should be nominal): 47% of QHP selections in non-expansion states were in households between 100-150% of FPL, or around 2.58 million. 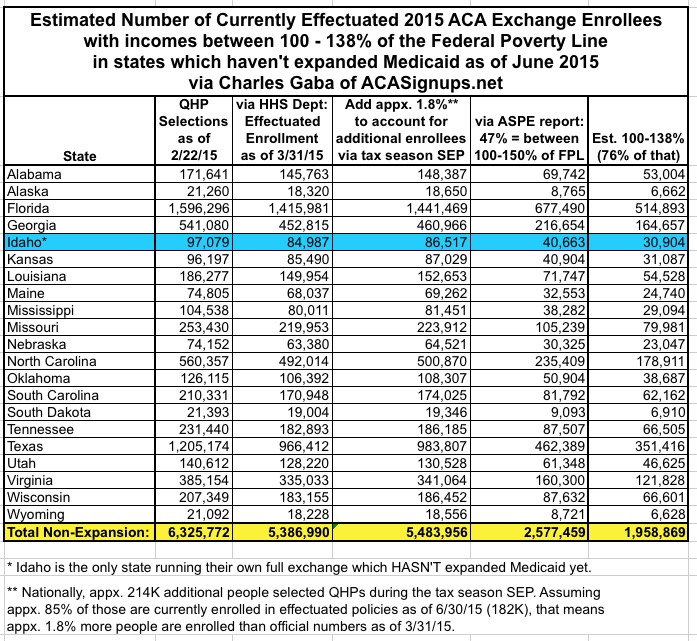 Of course, it's possible that it isn't an even spread, so this number is somewhat higher or lower. As it happens, Andrew Sprung wrote an entire article over at healthinsurance.org back in March about this very issue...and came to the exact same conclusion using completely different methodology:

About 11.7 million people are currently enrolled in private health plans sold on the ACA exchanges. Of those, 8.8 million bought their plans on HealthCare.gov, the federal exchange serving 37 states, including almost every state under mainly Republican control. Almost two million of those QHP buyers – approximately 1.9 million, or 22 percent – would have been eligible for Medicaid if their states had not refused to expand Medicaid eligibility in accordance with the terms offered by the ACA. (The Department of Health and Human Services (HHS) somewhat indirectly revealed this fact in an ACA enrollment report released earlier this month. See the note at bottom for an explanation as to how the 1.9 million figure was derived.)

At the time, Sprung only had the QHP selections to work with (not the actual paid/effectuated enrollees), didn't include Idaho's 31K or so, nor did he have the #ACATaxTime additions to tack onto the total...yet he still came up with roughly the same number: 1.9 million:

Here is the calculation behind the claim that 1.9 million enrollees in non-expansion states have incomes in the 100-138 percent FPL range. According to HHS, in states that refused the Medicaid expansion, a whopping 47 percent, or 2.8 million, had incomes between 100 percent and 150 percent of the Federal Poverty Level (FPL). Among those 2.8 million, those with incomes between 100 percent and 138 percent FPL would have been eligible for Medicaid (and so would not have been granted subsidies for private coverage) if their states had accepted the ACA expansion.

Unfortunately, HHS did not provide a figure for buyers in the narrower 100-138 percent (shoulda been in Medicaid) range. But by comparison with the enrollment figures in states that expanded Medicaid – in which just 22 percent of enrollees were in the 100-150 percent FPL band, we can infer how many were in that range in non-expansion states.

The irony here is that I had completely forgotten about Sprung's piece on this in March, even though I quoted his article at the time in one of my own entries.

Sprung recently wrote an updated entry on his own blog about the subject in which he comes up with a lower current number: 1.6 million. However, he's basing this on the assumption that only 68% of those in the 100-150% FPL range are below 138%, whereas Richard Mayhew over at Balloon Juice suspects that it's likely to be higher than my own 76% estimate, so I suspect it's still closer to 1.9 million even after attrition/non-payments.

So, what does all of this have to do with the headline of this entry?

Simple: What all of this means is that if the 21 remaining states were to expand Medicaid under ACA provisions, nearly 2 million fewer people would be eligible to enroll in QHPs via the exchanges next year.

UPDATE: There's a bit of confusion about whether ACA Medicaid expansion covers up to 138% FPL or 133%. Technically it's 133%, but according to Healthcare.Gov itself, it's "effectively" 138% due to "the way it's calculated", whatever that means.

UPDATE x2: Huh. OK, ask and ye shall receive; within moments of putting this question out there. both Dennis Shea and Louise Norris explained that the wording of the ACA "specifies a 5% disregard for AGI calculation, so the 133% in the law becomes 138%."

In other words, it's technically 133%...followed by having 5% knocked off of the adjusted gross income, making it effectively 138%.

The reason for this is just as silly as you probably expect (thanks to Louise for the link to Kaiser Health News):

The U.S. Senate passed the health overhaul bill in late 2009 with the 133 percent figure. That figure was already the minimum federal standard for pregnant women and children under 6.

The House, in its initial deliberations, favored an income limit of 150 percent of the poverty level, or nearly $35,000 for a family of four. During the process of melding the House and Senate bills, lawmakers were concerned about Senate rules that prevented them from changing  the eligibility level in legislation that had already passed in the Senate. So, the reconciliation bill , which passed both chambers, included the 5 percent disregard while maintaining the 133 percent figure.