Long-time readers will remember that throughout the 2014 Open Enrollment period, there was much fuss and bother made by both the Obama administration, the HHS Dept., myself and some ACA detractors over the "sub26er" population: Young adults aged from 19-25 years old who are covered by their parents policies thanks to provisions in the Affordable Care Act requiring all new policies issued since 2010 to allow this.

During the fall of 2013, leading up to the ill-fated launch of the exchanges, the HHS Dept. kept throwing around a hard number to hype up the "sub26er" factor: 3.1 million, which actually came from this ASPE Issue Brief from back in June 2012:

A recent survey from the Commonwealth Fund found that 6.6 million young adults who have enrolled in their parents’ health plans since November 2010 were unlikely to have been eligible for those plans before the Affordable Care Act. This number exceeds our calculation because it includes some individuals who were already insured, often through their own private coverage.

However, throughout the heady 2nd half of the 2014 season, Forbes columnist, Duke University research scholar, AEI adjunct scholar and general curmudgeon Chris Conover and I butted heads several times over competing surveys and reports which gave conflicting results for the "sub26er" figures. Washington Post fact checker Glenn Kessler also joined in the mix with yet more conflicting young-adults-enrolled-on-their-parents-plan data; the whole thing got to be quite messy.

Furthermore, some states already had laws requiring policies to allow young adult children to stay on their parents plans, and some individual policies did so anyway even where they weren't required to, making it even harder to sort things out.

In the end, I ended up switching my "sub26er" estimate from a solid 3.1 million to a range of between 1.6 million - 3.1 million, and called it a day. In fact, the ASPE issued a quickie report right after the end of the 2015 open enrollment period in March in which they quietly downshifted their 2010-2013 sub26er number to 2.3 million...right in the middle of my revised "range".

Then, last fall, as part of the spreadsheet/graph overhaul for the 2015 season, I took another look at the whole situation and decided to just scrap the sub26er section altogether. My reasoning was simple:

Consider that the original 3.1 million estimate used by the HHS Dept. 2 years ago was dated June 2012 but the data itself was as of December 2011, six months earlier. Also remember that the age range is pretty narrow: 19-25 years old. It's 3.5 years later now, so at least half of those people are now 26 or older and have moved on to other coverage, Of course, they've been at least partly replaced by new young adults who were 15-17 at the time, but the point is that there's a tremendous amount of churn in this particular subgroup.

This is all further complicated by the fact that, as I noted last fall, there's no further point in counting this group separately in my view because they're mostly already being counted as part of either the exchange or off-exchange QHP tallies (around 10.3 million on-exchange, around 8.2 milion off). It's not that they don't exist, just that they're already being accounted for elsewhere.

OK, so why am I bringing this all up again now?

Mainly because thanks to an industrious effort by site supporter Esther F., I now know the answer to at least one mystery: Just which states required the sub26er coverage and which ones didn't prior to the ACA being signed into law. The table below comes from a report in the Journal of Health Economics by Marcus Dillender last year: 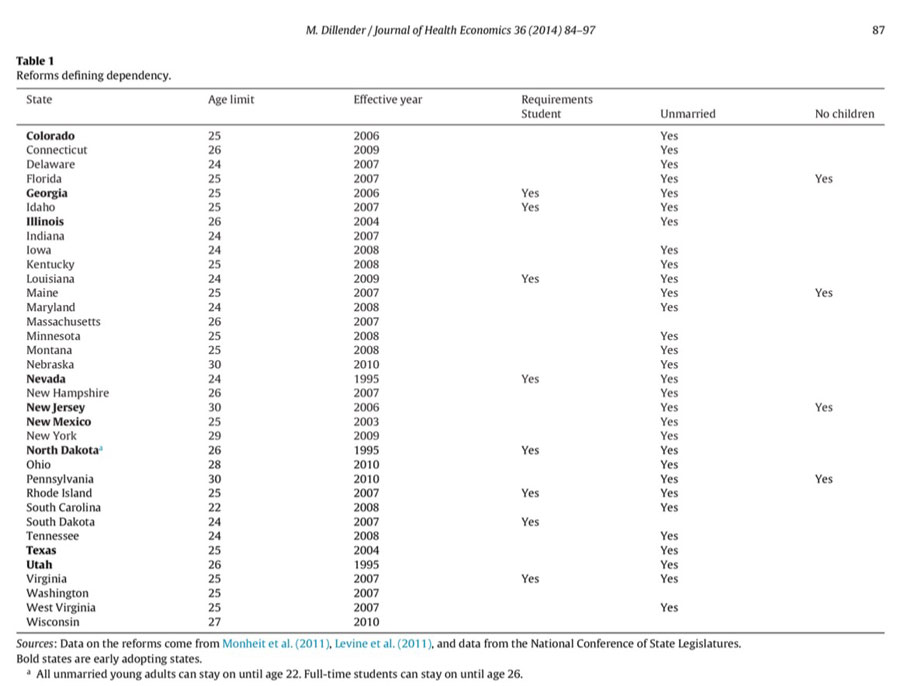 As you can see, prior to the ACA being signed into law, 35 states already had such laws on the books...however, almost all of them required the adult children to be single, 4 states required them not to have any children, and 8 states required that they be students. Finally, the cut-off age is all over the place, ranging from as low as 22 in South Carolina to as high as 30 in Nebraska and Pennsylvania.

Anyway, both Esther and I just thought this was an interesting bit of food for thought. In some ways it's sort of parallel to Medicaid expansion (at least for the states which expanded "standard" Medicaid); instead of the eligibility threshold being all over the map from state to state, there's a single cut-off point for every state which participates: 138% of the Federal Poverty Level.

UPDATE: As supporter Deb Soc just pointed out via Twitter, it'd be interesting to find out whether the pre-ACA rules listed above in Nebraska, New Jersey, New York, Ohio, Pennsylvania and Wisconsin (ranging from 27 - 30 years old) are also still in place. My guess is that they are, just as state-level minimum wage laws still apply in cases where they're higher than the federal minimum wage. However, if so, that would also presumably mean that the other restrictions (can't be married, have to be a student, can't have kids) would also apply for those over 25 in those states.

If anyone happens to find documentation about that question, please feel free to pass it on, thanks!