The Kaiser Family Foundation released another new, comprehensive national survey today about post-King v. Burwell awareness & opinion, as well as opinions on the ACA as a whole now that the KvB case is (finally) behind us. The poll was conducted after the decision, from 6/25 - 6/29 of over 1,200 adults across all 50 states; full methodology here.

Most of the results are interesting but not terribly surprising; while awareness of KvB rose after the SCOTUS decision, 61% of the public still didn't know much or anything about it, and the fact that 62% approved of the decision is pretty much what is pretty much in line with their earlier poll, where 63% of the public said that if the Supreme Court ruled for the plaintiffs, Congress should pass a simple law restoring tax credits to the 34 states in question. Basically, 62-63% just wanted this idiotic "problem" to be fixed one way or the other so we could move on to something else. As the Kaiser survey itself put it, after the decision "few expressed strong emotions" over it one way or the other; 66% were either "satisfied but meh" or "disappointed but meh" about the decision.

However, it's actually the very last question which caught my eye, and I was a bit surprised that Kaiser gave it so little attention.

Earlier in the survey, they note that overall approval of the ACA has indeed finally cracked through to positive territory, 43% to 40%, which is modest but symbolicly important: 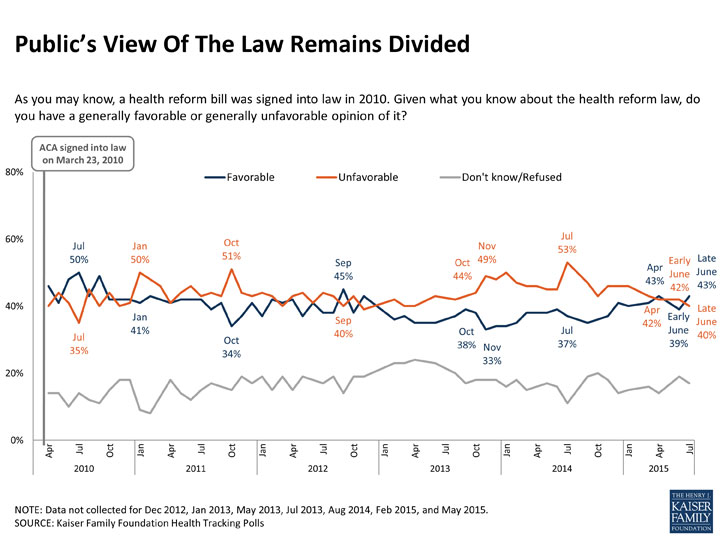 HOWEVER, check out the final question: "What would you like to see Congress do [next] when it comes to the healthcare law?" 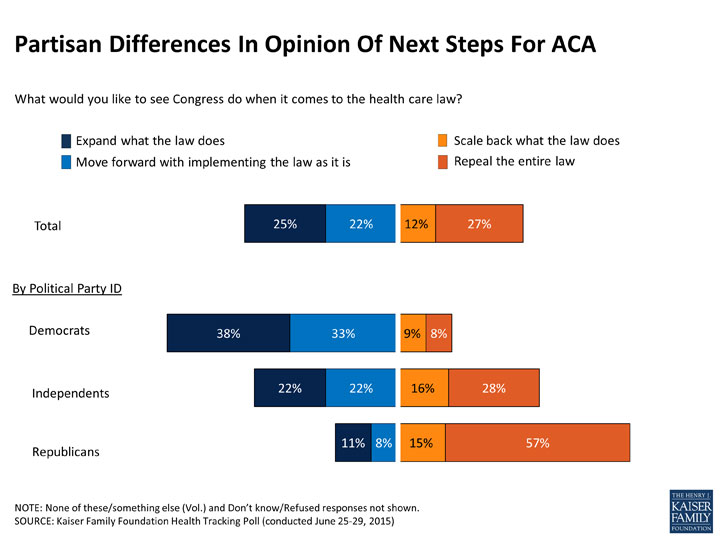 On the surface, this doesn't seem too interesting, but consider this: 47% of the country says the ACA should either be left as is or expanded, while only 39% want it either scaled back or repealed. That's an 8 point gap, which I presume is comfortably outside the margin of error.

In other words, while only 43% of the country likes the ACA, another 4% have accepted it as part of the "fabric of America", as President Obama would put it. Meanwhile, 40% don't like it, but a sliver of those folks have apparently resigned themselves to letting well enough alone.

In fact, looked at another way, 59% of the country wants to keep the ACA at least generally intact ("scale back" could mean something as simple as dropping the SHOP exchanges, which never made much sense to me either), while only 27% want it completely repealed at this point.

Heading into Year Three of Open Enrollment, and especially heading into the 2016 election, this strikes me as being significant.

UPDATE 7/03/15: Thanks to Andrew Sprung for noting the comparison with KFF's exact same question back in January, when the results were 42% keep/expand vs. 46% repeal/scale back. That's a 12 point shift in 6 months; not bad!

Of course, he also notes that in March (right after the 2nd open enrollment period ended), KFF's survey had very different results--59 / 29 in favor of the law being kept or expanded. However, the wording of the question was different in important ways: In that case it asked what Congress should do with the ACA, and the allowed negative responses were "repeal with no replacement" or "repeal and replace with Republican alternative".

That's quite different from simply "repeal" (which allows for some other alternative) or "scale back", so I'm not giving that too much credence relative to the other two surveys. Wording of questions matters.