Holy Crap. How big of a bullet did America just dodge? This big.

Just last night I posted this:

So, for the past few weeks I've been shouting from the rooftops about the other fallout of the King plaintiffs winning: Massive rate hikes next year, which would likely cause a roughly 50% rate hike across 34 states for millions of people.

I decided to be err on the low side of this range, figuring that even a 50% rate hike would be more than enough to make the point.

However, according to a new article by the Urban Institute (the source of the earlier 35% increase estimate...the RAND Corporation was the source of the 47% estimate), it looks like it could be even higher:

How much Obamacare premiums are projected to rise in the effected states if the Supreme Court rules for the plaintiffs. Even if you bought a plan under Obamacare but don’t receive a subsidy, you could end up paying more for health insurance. The Urban Institute says that if the Supreme Court dismantles the financial assistance available for Americans who enroll through the federal marketplace, many people will be forced to give up their insurance. And a disproportionate number of those who remain, the Urban Institute predicts, will be those who most desperately need health insurance—in other words, the very sick. As a result, insurers will need to raise all premiums in order to pay the medical bills of the sick people who remain in the insurance pool. Ultimately, the Urban Institute estimates, 70% of enrollees will leave the pool. (Remember that 87% of enrollees receive subsidies.) In an earlier analysis, the Rand Corporation predicted that premiums could rise 47%.

As they explain in the actual June report itself:

1. In our first brief, we estimated that the average nongroup premium would be 35 percent higher under a finding for the plaintiffs. This first estimate took changes in the expected age and smoking status of the enrollees into account and it took into account that many would shift from more comprehensive coverage (e.g., silver, gold, platinum) down to less comprehensive (bronze) plans as premiums rose. In our second brief, we held the characteristics of those who would enroll and the type of coverage they would choose constant, calculating a 55 percent premium increase for the median individual/family ineligible for tax credits to purchase the same coverage they would have otherwise post a decision for the plaintiffs. The brief showed this difference in dollars as opposed to the percentage difference shown here.

Here's the scary part: I'm not entirely sure from the wording whether that 55% average increase estimate includes the "normal" 2016 increase or not. If it does, then that'd be bad enough, of course...but if it doesn't, then it could actually mean something like 10-12% plus 55%...which could mean as much as a 65-70% hike in all!

Well, I actually asked both Ms. Brandeisky as well as the Urban Institute about this last night...

@karabrandeisky @urbaninstitute no problem. And if it *doesn't* include "normal" spikes, even scarier, is it *in addition* or *on top of*?

...and they ended up responding to me at exactly 10:12am this morning, exactly four minutes after the King v. Burwell decision was announced:

@charles_gaba @karabrandeisky (2/3) The 55% is a comparison of 2016 premiums with & without a decision for the plaintiffs.

To try to grasp the magnitude of this, consider that, while many premium rates won't be going up significantly next year, in other cases they almost certainly will .

Let's suppose that a given policy in one of the 34 states which were at risk is scheduled to go up by a fairly modest 5% next year.

According to the Urban Institute, if the plaintiffs had won and the credits had been taken away, that policy would have been expected to go up by 62.75%:

However, what if your premiums are scheduled to go up by around 10-12%, which is more typical of rate increases during the pre-ACA days? That'd be a whopping 70% rate hike.

Holy moly. But what about the higher-end projections? The massive hikes which some critics are warning of? What if your premiums are already set to increase by, say, 20% next year?

If the Supreme Court had done the Republican Party's bidding, had ruled for the plaintiffs and had cut off federal tax credits to those 34 states, millions of people would be looking at not "just" a 35% rate hike; not a 50% hike as I had previously thought; not even a 55% hike as I thought last night...

...but likely anywhere from a 60 - 90% premium hike...and that's just for enrollees who are already paying full price.

If you're one of the 6.5 million receiving tax credits in those states who's currently paying an average of $92/month, then assuming the full-price premiums would normally go up an average of 10% next year, guess what you're looking at?

Well, according to the HHS Dept., the average credit-receiving enrollee in those states is currently paying $92/month for policies costing $364/month at full price, so that would be:

Here's a revised, updated version of the spreadsheet. As you can see, Alaska would have seen their average premium skyrocket to over $1,000 per month (per person), while Mississippi would have seen the highest average percent increase, shooting up an insane 1,179% on average. 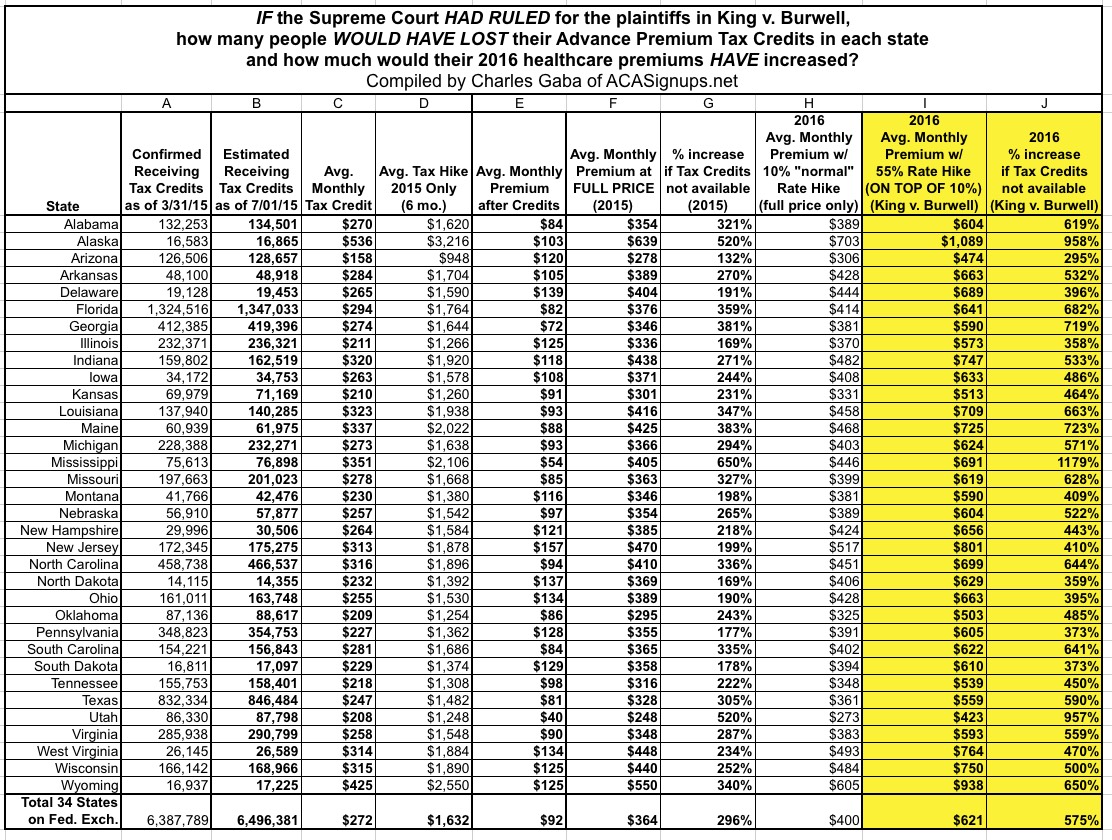 And that, my friends, is why the Supreme Court is so vital. Think about Justices Scalia, Alito and Thomas. Then think about the type of person who would be likely to be nominated to the Court by pretty much any of the Republican candidates for President if they were to win.