Via Reuters with more from Greg Sargent of the Washington Post:

Reuters reports that Senate Democrats are already preparing to roll out their response if the Supreme Court invalidates Obamacare subsidies for millions in three dozen states:

No. 2 Senate Democrat Dick Durbin said that if the administration loses the case, Democrats would offer a short piece of legislation clearly saying the tax subsidies are also available to people on the federal exchange.

“It’s one sentence and it’s already been written,” Durbin said in a Capitol hallway. “I hope we don’t need it,” Durbin added.

I can add more: According to a Dem leadership source, Democrats already have a one-sentence bill written on both sides — in the House and the Senate — and it will be introduced in both chambers at the “first available opportunity” if the Court ruling requires it.

I don't know what exact wording the "one sentence bill" would have to have to resolve the "...established through the state" brouhaha legally (I've read different opinions about how the wording works...it's even possible that it would have to be slipped into a different section of the ACA to "fix" the problem), but I'm hoping (on a personal level) that it'll be the one I've been pushing since February: 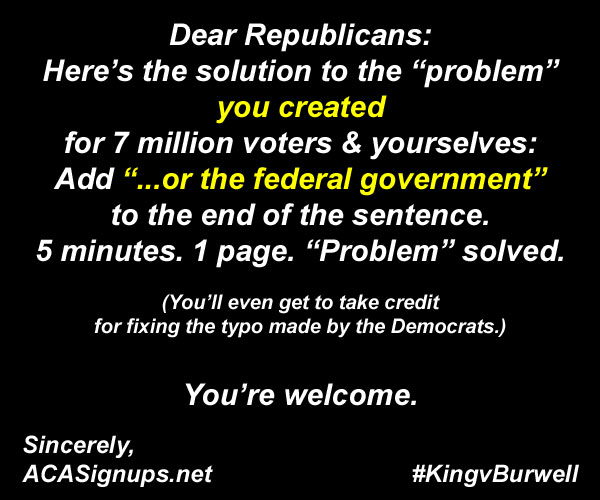