UPDATE: Oregon: Here's a development almost no one was expecting...

Way back on April 30th I posted the first in a series of 2016 rate change request entries for Oregon. At the time, the initial news didn't look very good, with the weighted (by market share) average increase looking to be around 23%.

At the time, and since then, I've posted a whole bunch of stuff regarding the importance of keeping calm about these initial rate requests for a variety of reasons. One of those reasons is that none of the initial requests had actually been approved yet. Last year, many large rate increase requests were denied nationally, with only more modest increases being approved by state regulators, and the same is likely to happen in many cases this year.

THIS REMAINS LIKELY TO BE THE CASE OVERALL. However, there's another possibility which, while I always knew was possible, I wasn't aware of actually having happened until today:

More than 220,000 Oregonians who buy their own health insurance are poised to pay more in premiums -- some of them a lot more.

State regulators have set insurance rates for next year's individual market, meaning for people who don't get coverage from their employers, Medicare or Medicaid.

And the news is not good. While some insurers had proposed rates similar to or better than this year's, the state is ordering them to be raised -- saying otherwise costs won't be covered.

Yes, that's right: As much as people may wish to think of regulators as existing solely to cut down rates, in some instances they may actually require the insurance company to increase prices more than the company itself is requesting.

This year, many insurers had proposed far lower rates than were set by the state. Zoom Health, a new company, proposed a silver plan premium for 40-year-olds of $233 per month, which wold have been a market low. The state ordered the company increase the premium to $291 per month.

State Insurance Commissioner Laura Cali said that while her job is to make sure consumers are not overcharged, she also has to ensure rates cover insurers' costs.

It's understandable that most people would be puzzled by this: What business is it of the commissioner to "ensure" that a private company doesn't lose money? Isn't that their problem, and one rather inherent in the whole "invisible hand of the free market" concept?

Normally, yes. However, due to the massive uncertainty involved in the ACA exchanges, the law includes provisions to help cushion the blow for insurers who misjudge their expenses and rates for the first few years. These are generally known as the "Three R's": Risk Adjustment, Reinsurrance and Risk Corridors.

They can get complicated, but the (very, very simplified) concept is that they help mitigate the financial risk of jumping into the new, scary, unknown world of the ACA exchanges, with stronger coverage minimums and lower cost maxiumums for the enrollee than the insurance companies may be used to.

Knowing that these provisions are there to cover some/all of their losses if they set rates too low, some companies may be tempted to deliberately lowball their rates in order to scoop up more market share, knowing that they face little/no downside in doing so. Presumably they'd then jack up their rates a year or two later (once the "Three R's" have evaporated), knowing that it's a lot easier to hold onto an existing customer than to try and gain a new one.

In response, the state regulators are supposed to keep an eye out for companies trying to "pull a fast one" in this fashion.

The other reason I can think of is that keeping the various companies in play also helps keep the market stable. When PreferredOne pulled out of the exchange in Minnesota this year due to underpricing and lost a bunch of money in the process, it severely disrupted the MNsure market. Something similar may have happened with CoOportunity Health in Iowa and Nebraska, although that was a bit more complicated. In some cases, the companies may not have "lowballed" deliberately, but simply misread the market and made an honest mistake.

In any event, the result of this development is that the Oregon individual market pricing looks like it'll end up roughly as follows: 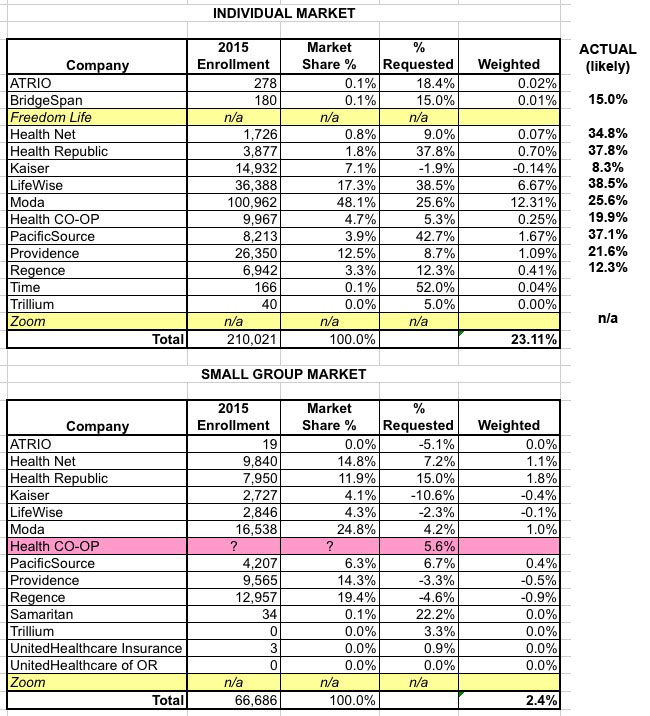 As you can see, Health Net, which had requested an average 9% increase, is actually looking at a whopping 37.8% hike, while PacificSource, which had asked fro a 42.7% increase was only approved for 37.1% (which is still pretty steep, of course).

Anyway, this obviously isn't news I'm happy to share, but it adds yet another way in which the initial 2016 rate filing requests are kind of meaningless; it's what gets approved which counts (whether in a good or bad way).

UPDATE: Ivan Williams, who (until recently) worked for GetInsured (an online insurance brokerage authorized to sell ACA exchange policies, similar to eHealth Insurance), gave me a more detailed overview of the reasons why insurance regulators might increase the rates higher than the companies are requesting; it mostly lines up with what I wrote above, but adds some other reasons and context:

Although it’s unusual for insurance regulators to require rate increases, such as those in Oregon, it’s not unheard of and even existed prior to the ACA and in some other regulated insurance markets (e.g. auto/home). Here’s why, insurance is essentially a promise to pay when a covered event occurs. This means when you purchase insurance you’re relying on both the insurer’s willingness and ability to pay future claims.

An insurer’s ability to pay future claims depends in large part on their financial stability (think S&P or Moody’s bond ratings). Inadequate rate setting can lead to financial instability and even failure so that claims can’t be paid by the insurer (they may still be paid by a State fund setup for this eventuality). In any case, by not letting insurer’s set rates too low regulators can hep keep the insurer stable and able to pay claims.

You might wonder why on earth an insurer would set rates too low. There are at least a couple main reasons this might happen:  1) actuarial errors/ miscalculations that lead to underestimation of risk;  2) an insurer’s attempt to gain market share by undercutting their competitors in the short-term.  The three “Rs” you mentioned in your piece would address some of the risk from both of these issues — but the 3 Rs haven’t always been there and won’t all 3 be there in the future. I hope this is helpful.

UPDATE: Title changed in response to farmbellpsu's comment that describing this development as "bad news" is unfair to the regulators...and, in a sense, Oregon consumers as well:

You did a good job explaining it and Ivan's update was extremely helpful. Ivan is right that this is not the first time for states to enforce the rate adequacy. It's just that the main theme that is presented here and throughout the media is that the rates need to be as low as possible. Calling this bad news that the state is complying with their statute 743.018 is what I struggle with. Oregon is unique too that their commissioner is an actuary.