No, I'm not the first to use the "Dog Catches Car, Now What?" metaphor for the Republican Party when it comes to King v. Burwell, but I think this classic Warner Bros. cartoon is an even better metaphor...because not only would a ruling for the plaintiffs mean that the dog has finally caught the car, that car has grown much larger since the dog started chasing it.

Back in 2013, when the various "no subsidies for federal exchanges!" cases were originally originally cobbled together by the CATO Institute (there were several essentially identical cases, including King as well as "Halbig v. Sebelius"), ACA exchange enrollments were still theoretical. The websites were either not launched yet or still a mess, and either no one had actually enrolled yet or their healthcare coverage hadn't even kicked into effect yet.

TODAY, almost 2 years later, it's a very different story. 6.5 million real people with real families and real financial/medical concerns would be impacted directly, and an additional 6-7 million would be hurt indirectly. The Road Runner is much bigger now, and so are the stakes.

(ok, in the cartoon version, the Coyote has shrunk relative to Road Runner, but whatever)

Greg Sargent of the Washington Post called my attention to a new Kaiser Family Foundation survey which, among other things, once again addresses public opinion re. King v. Burwell.

First the good news: 63% of the public nationally wants Congress to just tweak the damned wording by adding "...or the federal government" (or similar...whatever minimal wording is necessary) to the sentence in question. Basically, fix the friggin' problem and be done with this nonsense. Only 26% say "screw those people" and 12% aren't sure what should be done.

When looking at the 34 states in question (ie, ruling out mostly Democratically-leaning states, which have their own exchange already), it's not quite as lopsided: 55% say "just fix the wording already" while 32% say 'screw 'em". The other 13% in those states don't know. 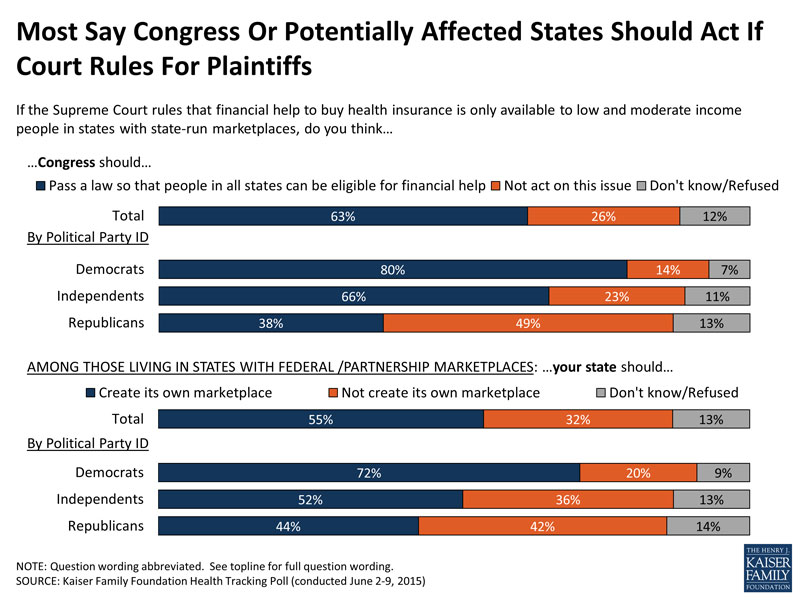 The other relevant question, however, and the one which has Sargent concerned, is about people's lack of knowledge of the King v. Burwell situation and how that ignorance can be used to spin the issue after the decision is actually announced. Even after nearly a year of people like me shouting about this mess from the rooftops, only about 27% of people nationally say that they have a decent understanding of the case (or, presumably, the full consequences if the plaintiffs win). 72% say they still barely have a clue. As you can see, the knowledge level has increased over the past 6 months, but not by much. 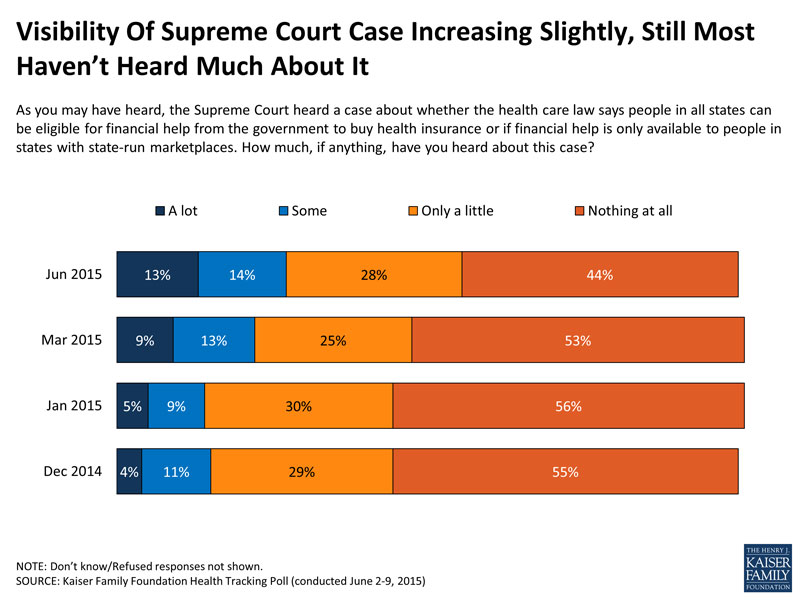 Very few people are paying attention. And let’s face it, once any post-King battle gets going, there will be plenty of opportunities for Republicans to roll out the old Obamacare Fog Machine once again. Republicans could pass something that temporarily extends subsidies but also repeals the individual mandate, and once Obama vetoes it, blame him for killing their effort to help all those millions of people. More generally, they can blame Obamacare itselffor kicking all those millions off of Obamacare, and then argue that this is another way the law continues to victimize Americans, an argument they arealready experimenting with rather creatively.

I'm not as pessimistic as Sargent on this, and neither is Kevin Drum over at Mother Jones, but in a world where Republicans can spew utter nonsense numbers in major media publications such as claiming the Affordable Care Act costs eleven times as much as it actually does without being called on it by the supposedly "professional" editorials, it's easy to see how they could convince a low-information public that black is white.

One thing which may be of some comfort here is that the "knowledge level" question appears to be at the national level only; the KFF survey doesn't parse this one down to the 34 states in question. I'm hoping that the awareness level is significantly higher in the states actually impacted by the King decision, but that's an unknown at this point. After all, if you live in California, New York or the other 15 states which would be in the clear, there's not gonna be nearly as much in the local media about hundreds of thousands of your fellow state residents facing possible financial/medical ruin.