UPDATED: Former GOP Senator Judd Gregg goes off the rails just hours after being the voice of reason

On All In with Christopher Hayes last night, former GOP Senator Judd Gregg gave an incoherent, nasty and just plain bizarre appearance in which he not only tried to claim that only 4 million people have gained insurance since the ACA was implemented (versus the actual net gain of 14-15 million), but actually tried to mock and insult Hayes when the host tried to correct him...by claiming that Hayes' numbers were the ones which were off.

I'll post the transcript below later, bit here's the actual clip...it's really difficult to capture the sheer craziness of Gregg's ramblings (thanks to Crooks & Liars for the video)

The closest equivalent to this incident I can think of was Sharyl Atkisson's surreal, alternate-universe article at the Daily Signal (an offshoot of the right-wing Heritage Foundation think tank) from nearly a year ago, in which she similarly managed to somehow come to the conclusion that only 3.4 million people total had gained insurance coverage as of last summer when the net Medicaid enrollment increase alone was more than that. In fact, the actual net reduction in the uninsured rate was closer to around 10-11 million when you included both private policies as well as Medicaid, SHOP, newly-insured off-exchange enrollees and so on...as well as adding in children, who are almost never included in these surveys:

Of course, that was nearly a year ago. What's the situation since then?

...and so on. No matter how you slice and dice the numbers, it's pretty clear to anyone with a functioning brain that yes, the net reduction in the uninsured since October 2013 was at least 10 million as of June 2014 and has since been reduced by at least another net 4 million or so since then, for a 2-year reduction of at least 14 million. I suppose it's conceivable that Gregg was simply ignoring the entire first year, but that makes no sense whatsoever either.

UPDATE: As you can see from the transcript below, Gregg appears to have confused percentage points with percent.

As an aside, as I've noted before, the Gallup survey graph used on Hayes' show is slightly misleading, as it starts at 10% instead of showing the full uninsured range. Here's a more accurate representation: 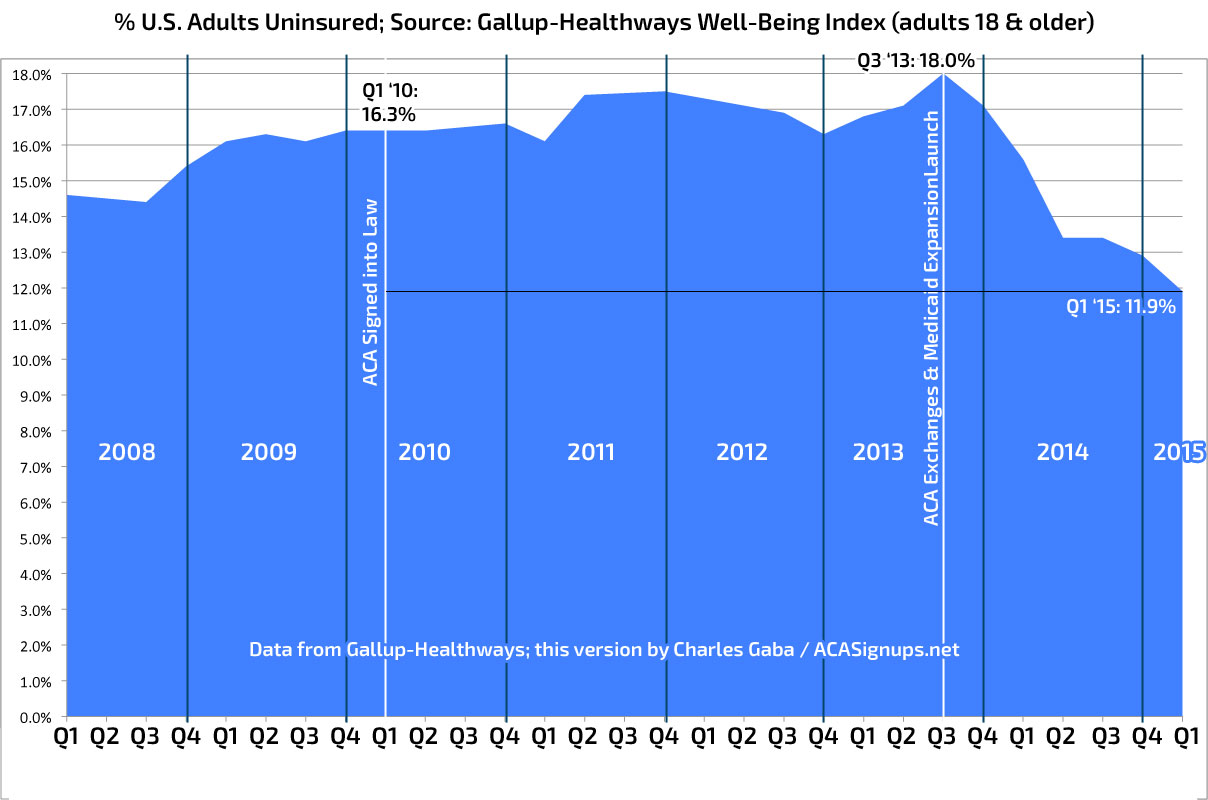 What's especially surreal about Gregg's claim is that just hours earlier, he had posted an Op-Ed in The Hill in which he actually sounded quite sensible in regards to the GOP's response to an adverse King v. Burwell ruling:

Although Republicans deserve considerable responsibility for having created this trap, they still should not fall into it.

If the Court rules that these subsidies do not apply and thus arguably strips 7 to 9 million people of their insurance, the Republican Congress should act immediately to restore the coverage and pay for it.

This should not be tied to some larger effort to bandage up ObamaCare by eliminating the individual mandate, the small-employer mandate, or other egregious items in the Affordable Care Act.

Naturally, Gregg is not praising the ACA; his attitude here is basically "Obamacare sucks, but we should "help" it to fail on it's own instead of monkeying around with it and taking the blame for it failing."

Obviously I disagree with his premise, but his recommendation for the GOP response--to simply do the right thing and tweak the language to keep the subsidies flowing--is certainly fine with me.

Transcript (thanks to Don Kramer for the link):

HAYES: Joining me now, former senator and former governor of New Hampshire, Judd Gregg. And Mr. Greg, your party, Republicans, have been referred to as the dog that caught the car or is about to catch the car, if it gets the ruling it appears to want in King vs. Burwell. What does the Republican Party do, what do Republican senators do, if the Supreme Court invalidates those subsidies? What do you think they should do?

HAYES: But what is that?

HAYES: That sounds like a -- I would love for there to be a magical pixie world where no one gets ill, but you actually have to come up with a concrete piece of legislation.

GREGG: It's not a magical pixie world at all. In fact, it was proposed prior to Obamacare being passed, a bill called CPR which would set up that type of system where you would have insured people for catastrophic care.

HAYES: And no one would have lost their doctor under that plan and there would have been no bureaucratic status?

GREGG: It would have been a much more efficient and effective way to deliver health care than what we are dealing with today. You know, you can throw words out like magic pixie world, but as a practical matter if you are not willing to consider alternatives which are substantive then you shouldn`t be making those types statements. This was a substantive alternative.

HAYES: What do you base that on, that it was more efficient?

GREGG: Because it was by definition more efficient and less costly. Did you -- if you look at the Obamacare proposal, almost all the representations that it put forward have failed. You don`t keep your own doctor. The costs have gone up significantly. You lose your insurance and more importantly than that uninsured folks didn't get picked up in any significant numbers.

HAYES: Senator Gregg, that is just not true. Uninsured rates have plummeted to a 15-year low.

GREGG: No, it hasn`t plummeted.

HAYES: Yes, of course it has. Look at the Pew data.

GREGG: It has not plummeted. It has gone from 44 million to 40 million. That is not a plummet.

HAYES: No, that`s not -- based on the Pew data, you think that is true?

GREGG: Yes, that is true.

HAYES: The rate of uninsured has gone down about 6 to 8 percentage points since Obamacare was effectuated in just about two or three years, right.

GREGG: Well, 6 to 8 points from a 44 million person base is about 40 million people. It is true. I wish you would get your numbers right. Your numbers are worse than Obama's.

GREGG: No, I mean, your ability to understand your numbers is worse than Obama. I mean, the simple fact...

HAYES: We will show that graph after we are done with this and we`ll see who is right about this.

GREGG: I`m sure you will show a graph. I`m not sure it is going to be an accurate one, but you'll show you the polling on the uninsured rate.

Holy smokes. Gregg seems to be failing to grasp the concept that "6-8 percentage points" is not the same thing as "6-8%."

Judd Gregg, former Governor and former U.S. Senator, appears to be unable to distinguish between these.

And, to my embarrassment, this is the same guy who President Obama wanted to pick as Commerce Secretary back in 2009. Yikes.

(Ironically, Hayes actually was overstating the drop slightly..."just over 6 percentage points" would have been more accurate).