Dear GOP: When you've lost Chris Wallace, I'd say your goose is cooked.

A couple of weeks ago, I noted that the all five of the Republican Party's assorted "fixes" for their plaintiff winning King v. Burwell have basically been given "junk" status by the American Academy of Actuaries...who aren't exactly known for sticking their noses into public policy debates. These guys are about the least-political, most level-headed bunch around, and they just took a giant dump on the GOP's half-baked KvB "fixes" only a few months after sending a pretty urgent open letter to HHS Secretary Sylvia Burwell in which they stressed that a King plaintiff win, without either Congress or the states taking action to resolve the issue, would likely resolve in massive rate hikes and disruption of the entire individual insurance market.

When I spread the word about their "GOP workarounds are worthless" analysis, I noted that, to paraphrase Lyndon Johnson's famous quote about Walter Cronkite and the Vietnam War (which itself, admittedly, may or may not actually have happened), "when you've lost the actuaries, you've lost middle America."

Representative Paul Ryan (R-WI) swore on Fox News Sunday that the GOP had a plan in place in case the Supreme Court eliminated the Affordable Care Act’s federal subsidies, potentially stripping health care from at least six million people. He declined to say anything about that plan, however, and faced questions from an increasingly skeptical Chris Wallace.

...But when Wallace asked if that solution would allow those millions to keep they’re subsidies, Ryan deflected. “Well, we will have a solution that addresses this law,” Ryan said. “We’ll have a solution for the people caught in this law, so that they’re not caught in the lurch.” In response to several followup questions about the specificities of the GOP response, Ryan said he wanted to wait until the Court ruled before he said anything.

Wallace then challenged Ryan’s assertion that Obamacare was a “failed law,” noting it had insured 16 million people, covered swaths more with pre-existing conditions, and slowed the rise of health care costs, and noted the GOP had not proposed plans to replicate those successes.

To give you an idea of how eyebrow-raising this interview...again, by Chris Wallace of FOX News, of GOP Rep. Paul Ryan, I have to reiterate...check out this actual graphic which was displayed during the discussion: 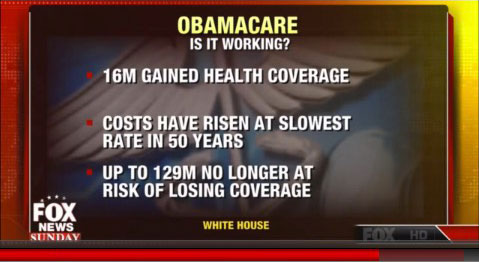 Wow. You really have to watch the whole clip; since I'm cribbing most of the Mediaite text, I'd ask everyone to visit the link to watch the clip itself.

This is the key quote from Wallace, however:

“For all the complaints, we’re five years into Obamacare and Republicans have still not come up with a coherent plan that will ensure that all of those millions of uninsured people will get coverage,” Wallace said.