The Post-King chess pieces are already in motion.

With the King v. Burwell Supreme Court decision imminent (anytime between now and June 29th), the chess pieces have been set.

Four words in the law could unravel Obamacare in the Supreme Court. So President Barack Obama is marshaling his own numbers – and an unusual moral weight — to stress the achievements of his health overhaul law on Tuesday.

In a speech to the Catholic Health Association, Obama will talk about the hundred years it’s taken to reform healthcare in the United States, and the millions it has helped over its five years of implementation. With a ruling due by the end of the month that could potentially send the new insurance marketplaces into a tailspin, Obama will warn, the social contract is at stake.

...On Tuesday, Obama will try to transcend the legal issues and political debate and instead focus on what the law has accomplished.

“There are outcomes we can calculate – the number of newly insured families, the number of lives saved. And those numbers add up to success,” Obama plans to say. “Then there are the outcomes that are harder to calculate – yes, in the tally of pain and tragedy and bankruptcies that have been averted, but also in the security of a parent who can afford to take her kid to the doctor. The dignity of a grandfather who can get the preventive care he needs. The freedom of an entrepreneur who can start a new venture. The joy of a wife who thought she’d never again take her husband’s hand and go for a walk in God’s creation.”

“I’m optimistic that the Supreme Court will play it straight when it comes to the interpretation,” he said. “If it didn’t, Congress could fix this whole thing with a one-sentence provision.”

That won’t happen, said John Barrasso of Wyoming, the fourth-ranking Republican in the Senate.

“Instead of bullying the Supreme Court, the president should spend his time preparing for the reality that the court may soon rule against his decision to illegally issue tax penalties and subsidies on Americans in two-thirds of the country,” he said in a statement. “Congress will not pass a so-called ‘one-sentence’ fake fix.”

Of course, that's not gonna go over too well, since the solution to the "problem" really is just that simple...

...so the GOP has a second strategy in mind when the first one fails: LIE. 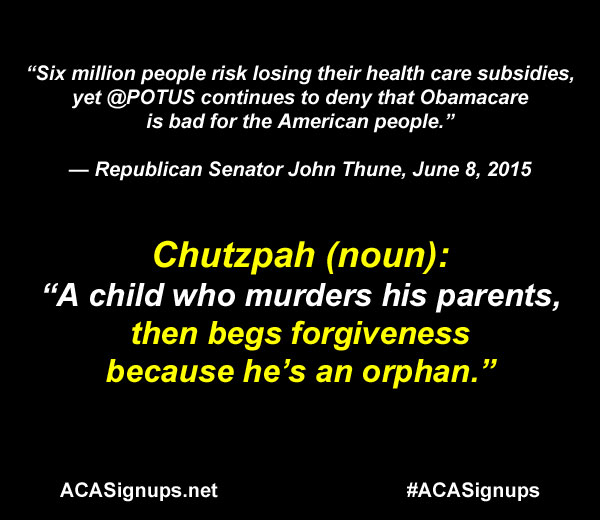