UPDATED: The HHS Dept. DOES have a King v. Burwell "contingency plan."

For months now, both ACA detractors and some supporters alike have kept asking the same question about King v. Burwell: What sort of "contingency plan" do President Obama, HHS Secretary Sylvia Burwell and the Democrats in Congress have in the event that the plaintiffs win the case?

I'm not sure why everyone keeps asking this, because back in February, Secretary Burwell wrote a letter directly responding to this question.

The House Republicans had sent an incredibly "CHOOTZ-PAH" filled letter to her demanding that she tell them what the HHS Dept's "contingency plan" would be in the event that the Supreme Court ends up doing their bidding by tearing away federal tax credits from 6.5 million people this summer.

Sec. Burwell responded in the only rational way possible: By pointing out that if they're absolutely determined to destroy the lives of millions of likely voters across 34 states (including swing states like Florida, Ohio, Michigan and Wisconsin) while simultaneously forcing insurance premiums up an additional 35% - 45% for everyone else in those states (on top of whatever they were already set to go up already), when it would literally take about 5 minutes for them to "fix" the very issue that they ginned up as the "problem" in the first place, there's not a hell of a lot that she can do to stop them.

Again, the ACA is designed as a 3-legged stool:

If you tear away one or two of these legs, the whole thing collapses.

King v. Burwell is an attempt to take away the third leg in 34 states.

As Sarah Kliff noted over at Vox this morning, all five of the GOP's "plans" put forth so far basically replace the 3rd leg (temporarily, in most cases) while simultaneously tearing away the first and/or second leg (and in some cases all three, eventually).

None of the above options involve anything that Sec. Burwell has any control over.

In other words, her only "contingency plan" is "try to convince the Republicans controlling the Supreme Court, Congress or those states to stop being colossal jackasses and actually do something to help the people they're supposed to be serving."

Not a plan likely to succeed, of course...but it's a plan. 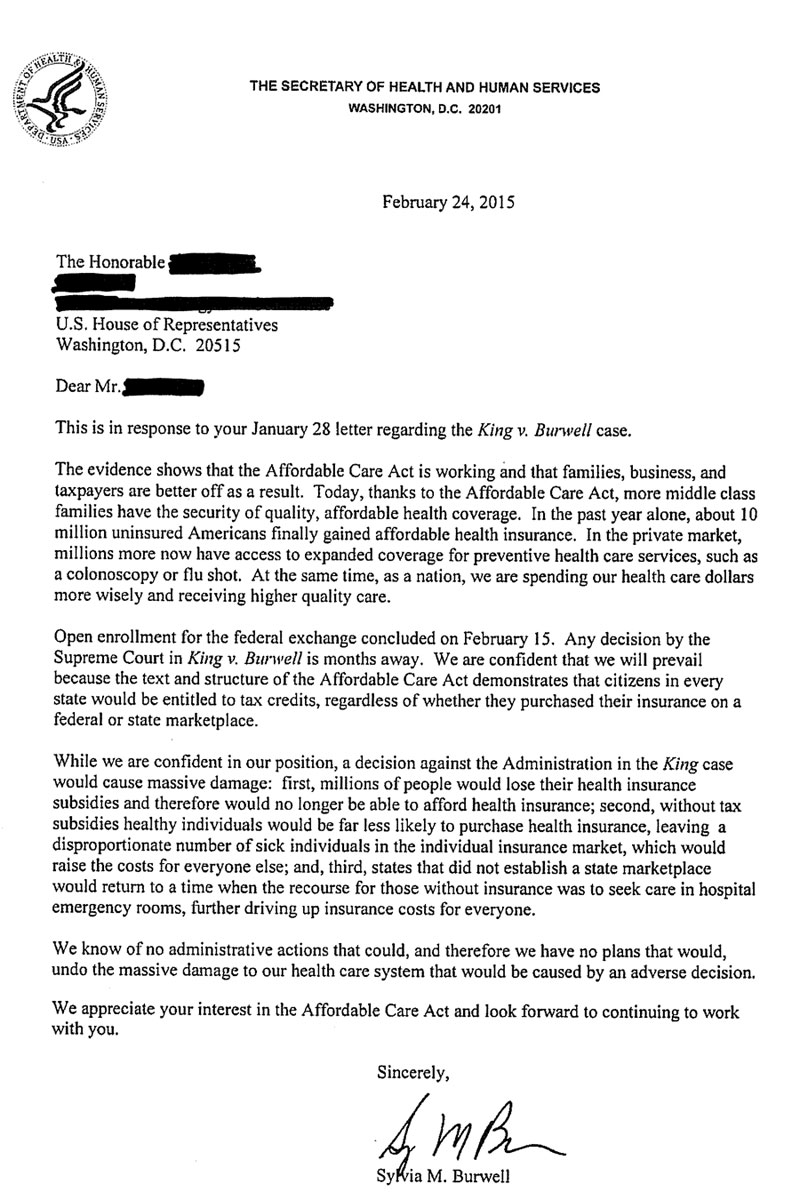 UPDATE: To clarify: Yes, of course, it it does come to that, there's various negotiations that President Obama could discuss--the Medical Device tax, the SHOP exchanges, hell, even the Employer Mandate could theoretically be on the table. In fact, the Employer Mandate may not be such a major issue anyway, since apparently having it in place hasn't made much difference one way or the other when it comes to how many employers provide coverage. However, those would all still obviously require Republican action by definition.

And yes, as Sarah Ferris noted this morning at The Hill, the administration probably could provide a bit more guidance to the states about minimum requirements/procedures for "establishing" an exchange, the way that both Delaware and Pennsylvania just did last week. However, again, that would still require the Republicans controlling those states to request the status change (Delaware has a fully Democratic administration, and Pennsylvania's Democratic Governor made the request...but it would still have to be approved by the Republican-controlled state legislature).

So again, to summarize: Other than agreeing to tear away one, two or all three legs of the stool (which is not gonna happen, period), the only ones who can "solve" the King v. Burwell "problem" are the ones who created it in the first place: The Republican Party, in partnership with the CATO Institute.

Burwell countered that there is not much the Obama administration can do at the moment, though she did refer to some planning efforts where previously the White House had given none.

Burwell raised the prospect last week, at a Wall Street Journal breakfast, of states working with HHS for help in setting up their own exchanges, allowing subsidies to continue.

But that solution would require state leaders to agree to work with HHS, which many Republican governors are reluctant to do.

"The critical decisions will sit with the Congress and states and governors to determine if those subsidies are available," Burwell said.