Needless to say, I was beyond stunned. While thrilled to hear this news, this also obviously left me in a rather awkward position: Do I apologize to the guy for my earlier attacks, or were they justified? In addition, in the back of my head there was obviously the possibility that his seemingly miraculous 180˚ ideological stance was simply some sort of con to get progressives/lefties to donate even more money to his campaign.

So, I hedged my bets: I posted him a qualified apology:

I donated a few bucks to you early on...but also wrote several blog entries which, quite frankly, tore you to shreds over what certainly seemed, by all evidence presented from the articles and even the follow-up interviews, to be incredible hypocrisy. Needless to say, I'm thrilled beyond words at your announcement today. IF the various articles/interviews truly did distort your actual views, than I apologize to that extent.

...and planned on leaving it until that.

Since then, there have been five major developments.

First, Mr. Lang's GoFundMe account to help cover his medical expenses has now raised over $26,000 of his $30,000 goal. And yes, that's the first time that I've actually linked directly to the page.

Second, Mr. Lang has actively offered to become Obamacare's literal "poster child" and indeed has been all over the place, being interviewed for various publications and radio shows to tell his tale. 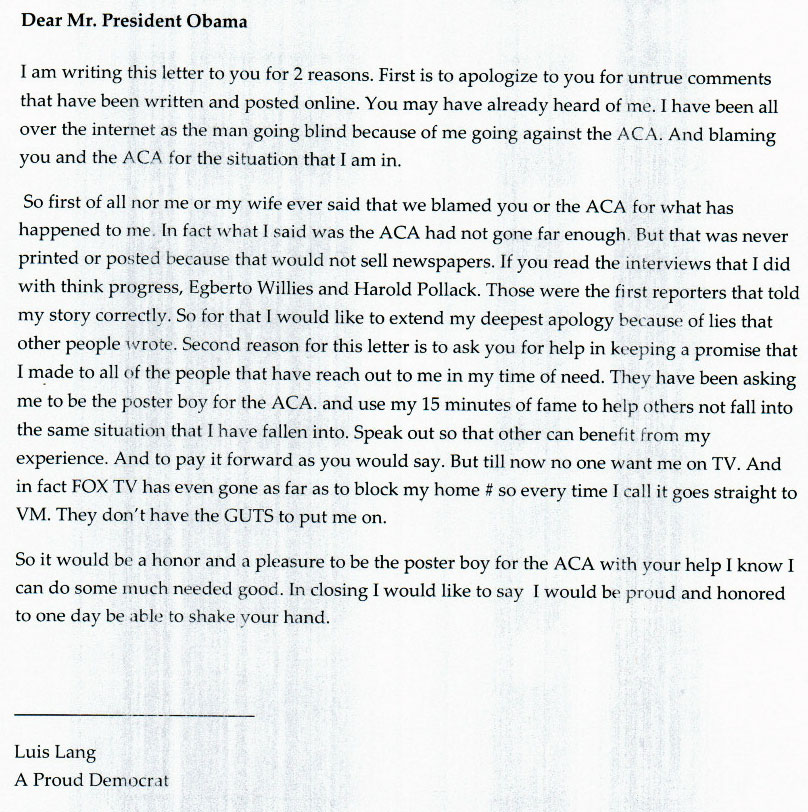 Fourth, just a few hours ago, Mr. Lang announced that he and his wife are launching The Luis Lang Foundation, which he intends to be a non-profit organization dedicated to helping other Americans caught in similar circumstances to himself (ie, serious medical issues but caught in the Medicaid Gap or otherwise falling through the healthcare coverage cracks). The website is just a splashpage for the moment.

And finally...Mr. Lang recently contacted me wanting to talk. So...we did.

I spent a solid hour on the phone with Mr. Lang, discussing everything from healthcare and the Affordable Care Act to immigration and mandatory drug testing.

He agreed to let me record the conversation, so I didn't take any notes while we spoke, but the first 20 minutes or so got screwed up, so I'll have to rely on my memory of our conversation for that part.

With that in mind, here's the main points which came out of our discussion:

He contacted the paper originally in order both to help bring attention to his own plight (his GoFundMe page had only raised a few hundred dollars as of that point) as well as to bring notice to others caught in his situation. He appreciates the reporter writing the story but feels that either she or her editors slanted his statements and views heavily in order to make him look like a "right wing ogre" when in fact he and his wife have always been pretty non-political.

Lang says that yes, he did register as a Republican...over 30 years ago, when he was 18, living in Florida and first registering to vote. Florida requires voters to declare a party preference for primary voting purposes. He was 18, it was 1984, Ronald Reagan was at the height of his popularity and the GOP was very different than it is today...so yes, he regisered as a Republican. Since then, however, he says that he's never been a strict party-line voter.

The original story in the Charlotte Observer, and some of the subsequent stories about the Langs made it sound very much as though Lang and his wife were die-hard conservatives who hated President Obama and the Democrats for passing the ACA. In particular, his wife was quoted as saying "“[Luis] should be at the front of the line because he doesn’t work and because he has medical issues...we call it the Not Fair Health Care Act.”

According to Mr. Lang, the last part of that quote was accurate...but she never said anything like the first part. In fact, he says the reason that they think the ACA isn't "fair" is because it doesn't go far enough to cover everybody (as noted in his letter above).

A follow-up story in the Charlotte Observer included this passage:

That’s enough to ensure he can get the treatment he needs, said Dr. Andrew Antoszyk, an eye surgeon with Charlotte Eye, Ear, Nose and Throat Associates. After reading Luis Lang’s story in the Observer on Wednesday, Antoszyk said he’d work with Lang and with Novant Health to give him the care at reduced cost.

According to Mr. Lang, he did indeed visit Dr. Antoszyk, but it turns out that, as shocking as it sounds, doctors actually need to examine patients in person in order to properly evaluate what sort of treatment they need and how much that might cost. After having some tests done, Dr. Antoszyk apparently realized that it was gonna cost a lot more than $12,000 to get the job done.

Lang realizes that now that he's close to his original $30K goal, people are likely to be highly suspicious if he were to increase the target amount. He's going to get proper, official documentation of his ailments and treatment expenses as proof before trying to up the goal.

Lang says that he felt a need to apologize to President Obama "for the media" distorting his statements (the letter itself is above; he pretty much reiterated the key points in it, both in terms of the apology and his "keeping a promise" to his GoFundMe donors to become a poster boy for the ACA in a positive fashion).

We discussed this a bit as one of the additional sources of confusion which can occur even when someone is trying to have an honest discussion of the ACA; if I understand correctly, Mr. Lang didn't realize at the time that it was the South Carolina GOP which created the Medicaid Gap in his state, not the Affordable Care Act itself...and the confusion was compounded because he was using a term which refers to an entirely different healthcare issue to describe it (an issue which was, ironically, solved by the ACA).

I noted that I'm in the same situation on that front (freelancer, self-employed); the solution in that situation is to simply make the best guestimate you can, and then keeping the amount of the credits you receive in mind so that if you do end up having to pay some/all of it back, it won't be a sucker punch; plus, you can log into your account and update your info later in the year.

We discussed both of these issues a bit, but it was getting a bit off-topic and it was coming up on an hour, so I tried to wrap it up at this point.

In the end, Mr. Lang's "miraculous" turnabout doesn't appear to be miraculous (or suspicious) at all...because it appears that he wasn't even remotely a stereotypical "right-wing conservative" type in the first place.

So. After all of that, and including the "Attorney Chad" incident, it appears that I've made two serious errors in personality judgment in as many weeks.

Conclusion: Data and numbers may be my area of expertise...but judging individual people doesn't appear to be, so I think I should think that through a bit better in the future before shooting my mouth (or keyboard) off.

In any event, here's the actual interview. It starts about 20 minutes into the phone call and runs about 40 minutes, for anyone interested in hearing the whole thing:

UPDATE: The Charlotte Observer has posted their own updated Q&A-style entry about Mr. Lang. Some of it lines up with what he told me yesterday, some of it doesn't and still makes his story/actions seem somewhat unflattering. I'm going to leave it at that for now.