"...all the other insurance companies cut back on what they were paying doctors so he could no longer afford to give me discounts because what he would make on other payments that other insurance companies would pay full payment, he would use it help other people who didn’t and basically what he was charging me was the same thing like if I had Medicare. So if I had Medicaid, he would have only gotten paid $80 for the visit and that’s the only thing he was asking me to pay."

Um...wait, what? I've read that 3 times now and for the life of me I can't figure out what the heck he's saying here. It sounds like what he's saying is that his doctor claims to be getting reimbursed less for other patients from the insurance companies since the ACA went into effect, therefore he can no longer afford to give Lang a massive discount.

That may or may not be true, but that's the doctor's choice; it's not like there's a provision in the law which forbids doctors from offering discounted rates, which is what Lang implied originally.

I even asked Pollack what he thought Lang meant here; his response?

@charles_gaba Dunno, to tell you the truth.

It’s not that I’m only blaming the federal government. I blame both the state and federal as far as … for certain things.

Ah. That's mighty big of him.

Well, you know what, Mr. Lank? You're absolutely correct about this...so what??? The only reason you would have to pay some of it back would be if your income ends up being significantly higher than you thought it would be. That's a GOOD THING. It means you have more money than you thought you would. And whatever amount you might have to pay back would still be a lot less than the increase in income.

In fact, I went ahead and plugged in Mr. & Mrs. Lang's info into HealthCare.Gov. He says that he's 49 and his wife is 55. He's also a smoker (dunno if she is; I'll assume not). They live in Lancaster County, SC. 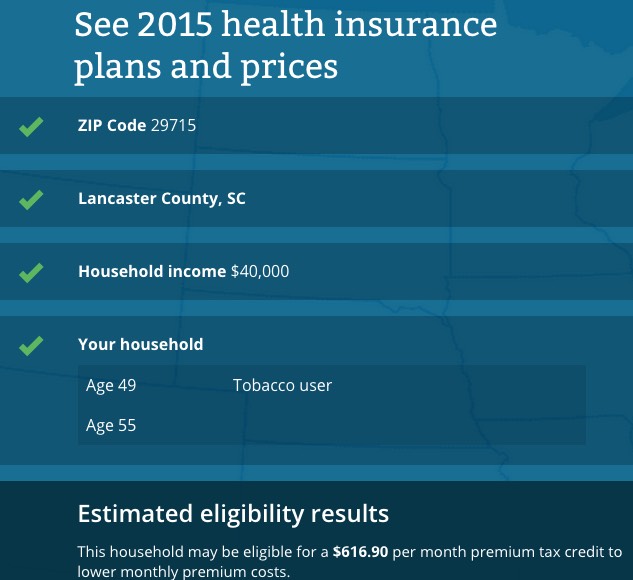 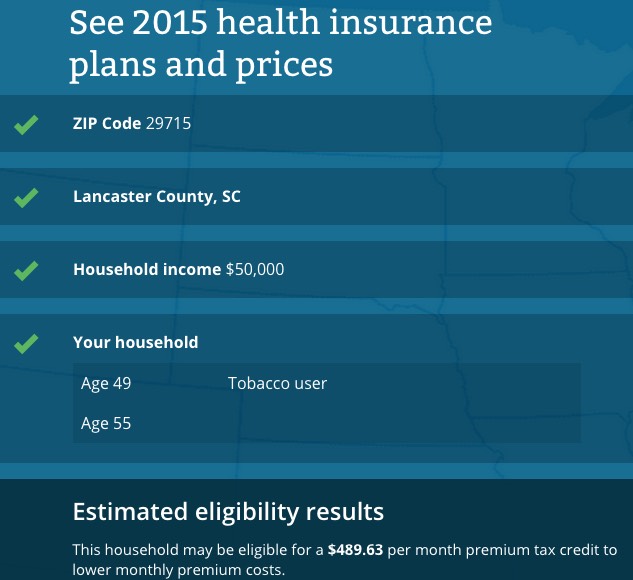 For someone who claimed that he had insurance because he was so "proud" to pay his own way, he sure seems to have a fuzzy grasp of economic logic.

Of course one of the biggest attacks on the ACA during the 2012 Presidential campaign was the utterly BS lie claiming that the law "robbed Medicare of $700 billion"...when in fact here's what the ACA actually does:

Neither Obama nor his health care law literally cut a dollar amount from the Medicare program’s budget.

Rather, the health care law instituted a number of changes to try to bring down future health care costs in the program. At the time the law was passed, those reductions amounted to $500 billion over the next 10 years.

What kind of spending reductions are we talking about? They were mainly aimed at insurance companies and hospitals, not beneficiaries. The law makes significant reductions to Medicare Advantage, a subset of Medicare plans run by private insurers. Medicare Advantage was started under President George W. Bush, and the idea was that competition among the private insurers would reduce costs. But in recent years the plans have actually cost more than traditional Medicare. So the health care law scales back the payments to private insurers.

Hospitals, too, will be paid less if they have too many re-admissions, or if they fail to meet other new benchmarks for patient care.

Boy, that sure as hell sounds a lot like "getting rid of wasteful spending" like over-reimbursing private companies for Medicare expenses!!

At this point they move to the GoFundMe account, which is currently up to over $20,000 from 1,100 donors, I might add...and judging from the comments, it appears that it's still almost entirely self-described liberals/progressives who are footing his bill.

I should note at this point that there's one specific part of the original Charlotte Observer article which made it "political": 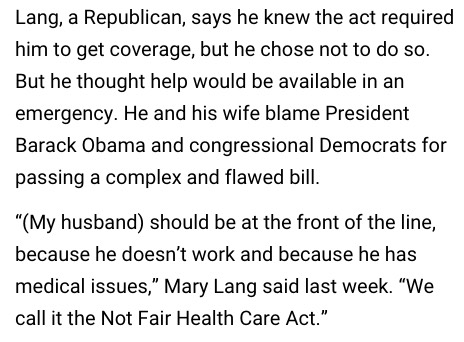 He identified himself as a Republican and blamed the completely-Democratically passed law for his problems, which would've been bad enough...but then his wife went and made an unbelievably selfish, arrogant and, frankly, rude statement. That was what set people off more than anything else, I suspect.

Then Lang says something which I had to re-read to believe it. Check this out:

"what I think should have been done is the Affordable Healthcare and Medicaid should have been combined in one. So that way, the states … take it out of the state’s hand. The money would not go to the states. It would all be in one fund so that conservative or liberal states could not play games and that way it would be mandatory and it would be fair for everybody."

Gee, that sounds an awful lot like...dare I say it? Single Payer Healthcare.

In closing, Lang continues to give backhanded compliments to the 1,000+ progressives who have stepped up to the plate (sure they're saving my eyesight, but they're saying mean things while doing so!!) while simultaneously whining about how he's received (literal) radio silence from anyone on "his side" (conservatives) aside from a single local radio station.

I think Pollack did a pretty good job overall, although I do wish he had pressed Lang to actually answer some of the questions that he avoided, such as why the hell his wife hasn't been working (part time at least) if their situation has really been this dire for so long, especially as they have no kids. Speaking of his wife, I'd be fascinated to hear her try to defend her "put him at the front of the line" quip.

In short, aside from inadvertantly advocating for Single Payer Healthcare (!), Mr. Lang...

Not once throughout the interview do I ever hear Mr. Lang take any of the blame for his own situation himself.

In conclusion,  the only thing I heard here which helps his case whatsoever is that yes, refinancing his house probably isn't a viable option. So, you know, there's that.