UPDATED: Off-Topic: "Attorney Chad" is about to have a really bad weekend.

My friend was killed in the @Amtrak crash. Her family received this note. I think we should all give Chad a call... pic.twitter.com/CH59KJw2QK

The note in question: 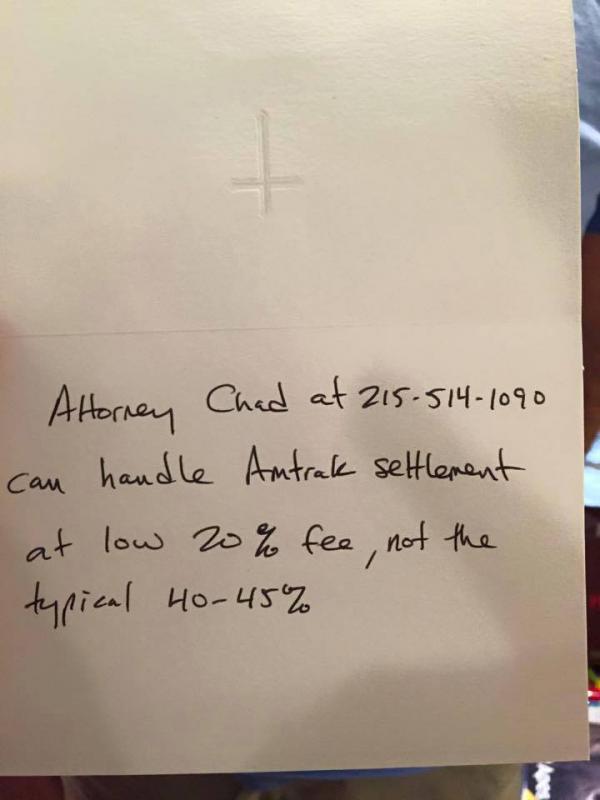 While I'm normally not a big fan of "doxing" people, as it's called, this guy is literally asking for it.

The "Chad" in question appears to be Chad G. Boonswang, a litigation lawyer in Philadelphia (as you'd expect) and yes, the phone number on the note matches the contact info on his website's public domain name registration.

I have no idea whether there are any sort of Bar Association penalties for this sort of thing, but it's a pretty disgusting thing to do if you ask me. I'll leave it at that.

UPDATE: OK, I just looked up the rules in the Pennsylvania Bar Code regarding solicitation of legal services, and sure enough:

(a)  A lawyer shall not solicit in-person or by intermediary professional employment from a person with whom the lawyer has no family or prior professional relationship when a significant motive for the lawyer’s doing so is the lawyer’s pecuniary gain, unless the person contacted is a lawyer or has a family, close personal, or prior professional relationship with the lawyer. The term ‘‘solicit’’ includes contact in-person by telephone or by real-time electronic communication, but, subject to the requirements of Rule 7.1 and Rule 7.3(b), does not include written communications, which may include targeted, direct mail advertisements.

(b)  A lawyer may contact, or send a written communication to, the target of the solicitation for the purpose of obtaining professional employment unless:

(1)  the lawyer knows or reasonably should know that the physical, emotional or mental state of the person is such that the person could not exercise reasonable judgment in employing a lawyer;

(2)  the person has made known to the lawyer a desire not to receive communications from the lawyer; or

Sounds to me like unless Mr. Boonswang is a member of the family or was already their attorney, he's in a whole heap of trouble (and presumably he wouldn't be giving them this note if he already worked for them...and I'm pretty sure he isn't family).

UPDATE x2: Just to clear up a few things:

1. The victim in question was not a friend of mine, she was a friend of Rachel Lutz, the woman who posted the photo of the note above. I'm sure she appreciates your sympathies, however, of course.

2. For those who think that perhaps my response is inappropriate, here's what the Dean of Wayne State University has to say about it:

3. Finally, in fairness, here's the response from Mr. Boonswang:

@SAndersonWhite @racheldaytwa Whatever you are referring to was NOT sent from my office. I am looking into what happened here.

@SAndersonWhite @pabarassn @racheldaytwa Before assuming things, please check your facts. Whatever you are referring to was NOT from me.

First of all, the phone number on the card is the same phone number on his domain name, so he's definitely the "Chad" referred to in the note. And he is a personal injury lawyer in Philadelphia, so that all makes sense. Yet he's claiming that "whatever we're referring to" isn't from him or his office.

So...either Mr. Boonswang is lying, or someone (an overzealous paralegal/intern, a disgruntled former employee, etc.) is going around scribbling offensive notes with his name & number on them and passing them out at high-profile disaster scenes on the off-chance that someone would happen to take a picture of the note, post it online and hope it goes viral.

This is certainly possible, but it sounds...farfetched.

However, even if that's the case, Boonswang's "whatever you're referring to" wording is very strange. It's perfectly obvious what we're referring to; the photo of the card is clearly visible in the Twitter thread. Perhaps he's technically clueless enough not to understand how to view a Twitter conversation?

I'll keep updating this as further developments come out.