"One of the things Ford had always found hardest to understand about humans was their habit of continually stating and repeating the very very obvious, as in ‘It’s a nice day’, 'You’re very tall’, or 'You seem to have fallen down a thirty-foot well, are you alright?’

At first Ford had formed a theory to account for this strange behaviour. If human beings don’t keep exercising their lips, he thought, their mouths probably seize up.

Sarah Ferris at The Hill has a story this morning about the Republican Party's "list of demands" in the event that the Supreme Court rules against the federal government in the King v. Burwell case.

I was tempted to point out the obvious terrorist/hostage theme in the headline, but instead I'm gonna just focus on one snippet from the article:

But, in the event the justices rule against ObamaCare, Democrats will offer a simpler solution — passing a bill to fix the few sentences of the statute that are under scrutiny.

Why yes...yes, that sounds about right. In fact, I seem to recall posting this several months ago: 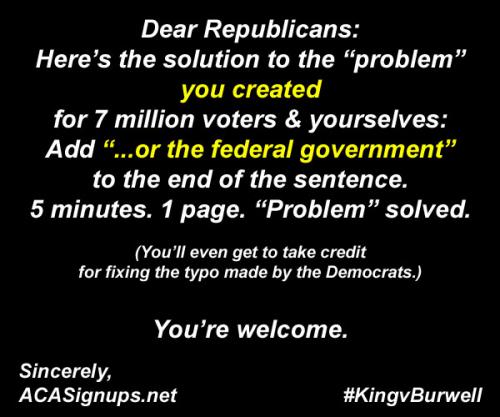 Unlike previous cases challenging the president’s authority to pass ObamaCare, King v. Burwell rests on a close reading of only a few words of the law’s text.

That puts Republicans at risk of taking the blame for losing billions of dollars in healthcare subsidies if they can’t reach consensus on an alternative plan.

Hmmmm....yes, that certainly sounds accurate to me. In fact, as I put it way back last July, the headlines will read something like:

UPDATE 5/4/15: Someone pointed out that Wisconsin GOP Senator Ron Johnson said essentially the same thing in his WSJ Op-Ed a couple of weeks ago:

If the court rules against him, President Obama’s response will be diabolically simple and highly effective. He will ask Congress to pass a one-sentence bill allowing the subsidies to flow through federal exchanges. At the same time he will offer governors a contract to convert their federal exchanges into state exchanges with a simple stroke of a pen.

Yup. Can't argue with that here. In fact, I specifically used Bobby Jindal in one of my first entries on King v. Burwell (actually "Halbig" v. Burwell at the time) back in July, although at the time I was thinking of my "Denny's Grand Slam" solution:

In fact, I agree with everything Bobby Jindal is saying here. The difference is that he seems to think that it took some kind of strategic brilliance on his part to "reveal" the Democrats' "secret plan". Guess what, Gov. Jindal? It didn't take a genius. I'm no genius and I figured this out nearly a year ago. It's really simple, actually:

One other thing: You're also correct that the President (and other Democrats, if they have any sense at all) will absolutely use real world, flesh and bone, living, breathing people suffering from your ass-jackery as examples of how awful you're being.

Actions have consequences. Yes, the Democratic Party probably made a minor drafting error when they passed the ACA. However, that error could have been resolved in 5 minutes if the Republicans in Congress hadn't been so obsessed with tearing down anything enacted by Barack Obama (even a law which is pretty much your party's creation). The job of publicly elected officials, in case all of you have forgotten, is supposed to be to make life better for people, which includes not being a royal jackass at the expense of millions of people's well-being.

Instead, you chose to be unbelievably small-minded and petty by taking the entire thing to the Supreme Court...and now you're freaking out about the backlash if you win your stupid case?

Well, tough beans, guys. You made this bed, you get to lay in it.