With this morning's release of updated enrollment data from the Maryland Health Connection, confirmed 2015 QHP selections via the ACA exchanges have now officially broken the 11.9 million mark, with a minimum of 11,904,402 QHP selections having been reported by the various exchanges nationally.

However, there's still no enrollment data since late February for about 10 states, and only fractional data for the other 40. Based on my best estimates, the actual total QHP selections to date should be slightly over 12.3 million as of yesterday (click image below for the full-size version).

As for the tax filing season Special Enrollment Period specifically, there have been over 110,500 confirmed enrollments to date (68,000 via Healthcare.Gov, 33,000 in California, around 4,800 in Washington State and over 4,700 in Maryland). My best estimate is that #ACATaxTime QHPs will end up being roughly 140,000 in the end.

So, what does this tell us about the debate over when the Open Enrollment Period should be in the future? Well, 140K is a significant number of people, but it's well below what pretty much anyone (including myself) was expecting. In the end, it appears that the type of person who still didn't know that there was a tax penalty even after 5 years of people screaming about it on every news media outlet every day tends to also be the type of person who still won't sign up even when you give them an extra 6 weeks to do so.

There's been a lot of discussion about whether it's better to keep open enrollment in the fall/winter season or to move it to the spring. The thinking is that as it stands now, people are distracted by the holiday season (Thanksgiving, Christmas, New Year's, Hanukkah, Kwanzaa), scrambling to deal with end of year finances and so forth. In the springtime, the thinking goes, matching the enrollment period up with the tax filing season would let people enroll at the same time they file their taxes, while discussing the penalty for not doing so with their tax preparer, etc.

However, while 140K is a decent number of people, in my view it's not nearly enough to justify shifting things to the spring in the future, for a few reasons:

Next year open enrollment is also 3 months, but pushed back a couple of weeks (Nov. 1st - January 31st). With luck, the January 1st effectuations will increase a bit further to, say, 85% or so of total 2016 enrollments. The more people (and higher percentage) start their coverage at the very beginning of the year, the easier it is to track things like attrition, doctor visits, prescriptions, procedures and so forth.

Now, what the HHS Dept. probably should do in the future is actually something along the lines of what they just did...except more formalized. Something like:

They don't have to make a huge thing out of it, and the numbers would probably be nominal going forward as more and more people get used to how the system works, but it would help diffuse (or even defuse) the number of people griping about the tax penalty every spring. The key thing is to lock down the dates consistently instead of them bouncing around like they have been until now.

Anyway, for the rest of the year, assuming the King v. Burwell Supreme Court decision doesn't throw a hand grenade into the whole works, I'm expecting roughly another 1.5 million people to enroll via the off-season "qualifying life change" options (getting married/divorced, giving birth/adopting a child, losing your current coverage, moving to a new location and so forth), at a rate of around 7,000 per day for most of the year, tapering off in the last few months as the 2016 season kicks in.

This may sound like a lot, but last year it was even higher during the off-season (around 9,000 per day); I've tamped down my expectations a bit out of caution this time around. Also, SHADAC just released a report estimating that around 8.6 million people could potentially enroll during the off-season due to Qualifying Life Changes; 1.5 million would be less than 18% of this and seems more than reasonable. 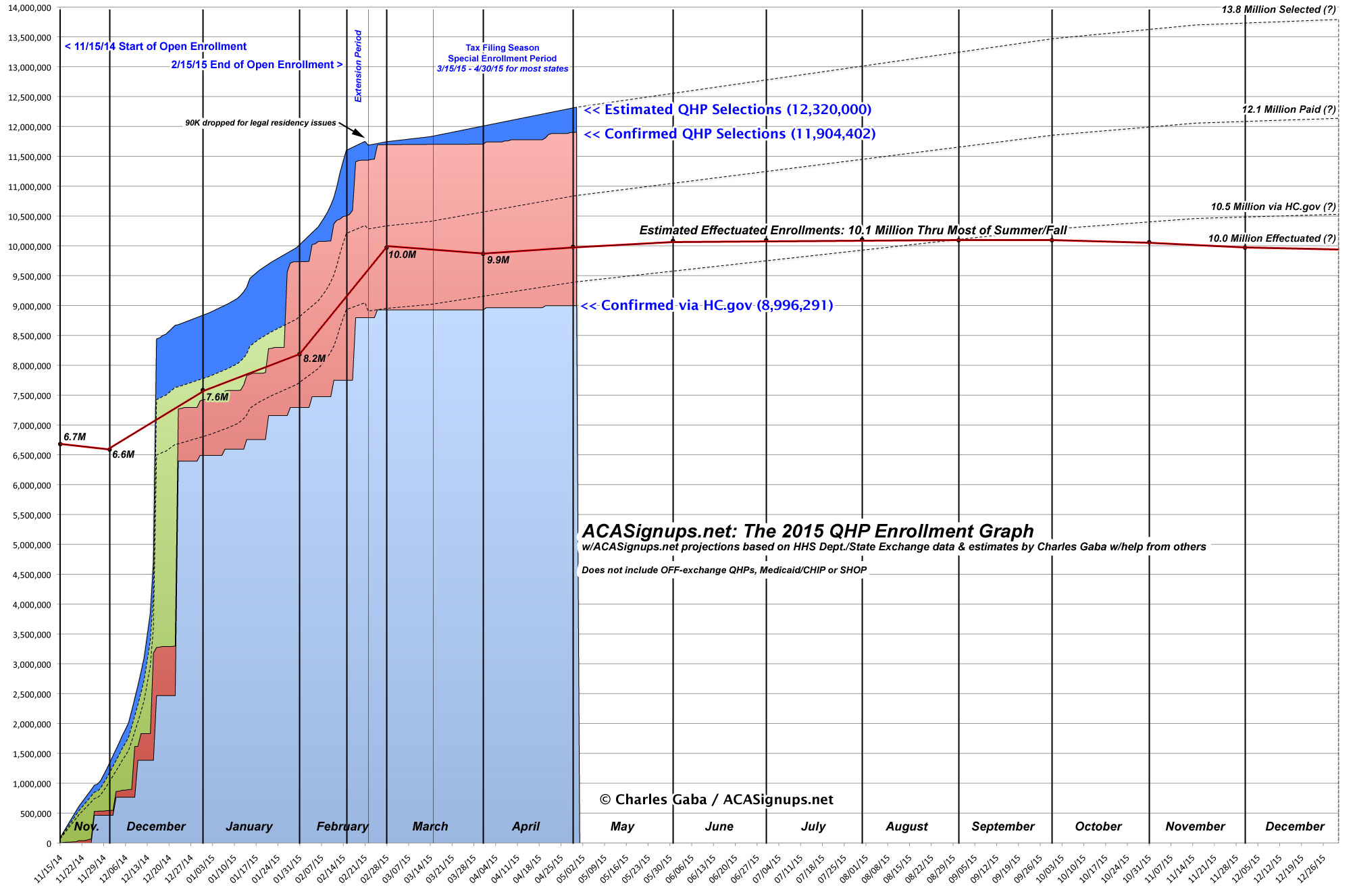