UPDATE: In which I get a shout-out of sorts in official U.S. Senate testimony...from the architect of King v. Burwell.

Well, this is flattering...I guess...

This is interesting in several ways.

First, of course, I suppose I should feel some sense of pride that my work here at ACASignups.net has actually made it to the floor of the U.S. Senate, albeit via a single number buried in the middle of someone's testimony (and not actually referenced by name, of course). (see update below)

Second, it's noteworthy that the first time that this has happened, the person citing ACA Signups happens to be one of the 2 architects behind the very Supreme Court case which seeks to destroy the Affordable Care Act in the first place.

Third, I could be wrong here, but I'm pretty sure this is the first time that official U.S. Senate Committee testimony has included a reference to an article with the phrase "screw your base" in the title. So, there's that.

Fourth, the whole point of that article was to pare down and seek out the exact number of people who would be negatively impacted by an adverse King v. Burwell ruling. I throw a lot of numbers around in the piece in question, ranging from as high as 16 million to as low as 5 million depending on the context.

Mr. Cannon was obviously very careful about the exact number he chose to use here: 6.7 million.

Why 6.7? Wouldn't you think he'd go with a lower number in order to try and minimize the damage caused by winning his case? Well, if he'd gone with 6.5 million, that would be admitting that Oregon, Nevada and New Mexico should be "in the clear" in the event of the King plaintiffs winning their case. By using the higher number, Mr. Cannon is making the case that those 3 states should lose their federal subsidies just like the other 34 operating off of Healthcare.Gov this year, even though 2 of them were running their own full exchanges last year and the third (NM) has all the proper legal paperwork in place to run their own.

Beyond that, however, he definitely didn't want to make the situation out to be any worse than it would be; therefore, he's also being very specific in the rest of his language. A more honest assessment of the situation would use the number 8.2 million, which would include those who would no longer afford their policies due to the massive rate-hike impact of the King plaintiffs winning. To avoid this higher number, Cannon specifically refers to those who would lose access to the subsidies only. Nothing wrong with him doing this, really; it is accurate, I just found it noteworthy.

However, just 2 paragraphs later he gets a bit sloppy with his wording (irony!) by stating:

Even if the Court makes the right decision and frees 57 million Americans from the IRS’s illegal taxes, the ACA would continue to harm tens if not hundreds of millions of employers and individuals, and an additional 6.7 million Americas would see their health-insurance bills soar as the loss of those illegal subsidies brings them face-to-face with the full cost of the ACA’s very expensive coverage.

OK, he does cover himself by including the "...as the loss of those...subsidies..." caveat, but the fact remains that a lot more than 6.7 million would "see their health-insurance bills soar" as a result of him winning his case. As noted in the very article he cited, it'd be more like:

...for a total of between 12-14 million who would be seriously damaged by a King plaintiff win.

Anyway, it's official: ACASignups.net is now considered a Reliable Source® by not only ACA supporters but die-hard opponents as well, so I supppose that's worth something.

Meanwhile, Sen. David Vitter, the chair of the Senate Small Business Committee, doesn't seem to be finding a whole lot of love for his Obamacare attacks these days, even from his fellow Republicans, which is also noteworthy.

UPDATE: Just to clarify, when I noted that I wasn't personally credited in the link, I wasn't complaining about it; that's the nature of website links, you often simply link to the source URL itself. However, Cannon apparently thought I was griping about this, because he just personally sent a screen shot of what I presume is the official version of his testimony, which does indeed include full citation (the NRO version doesn't include this): 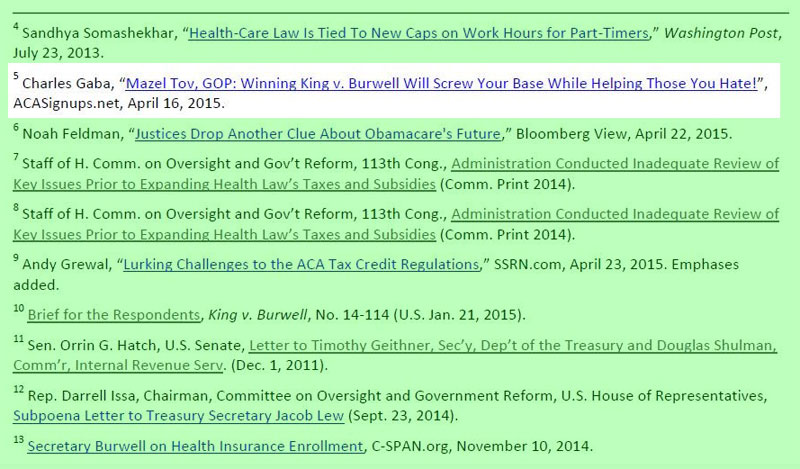 Well, now. As I said, I could be wrong, but I somehow suspect that this is the first, and likely last time that the phrases "Mazel Tov" and "Screw Your Base" will be found in the same U.S. Senate Testimony as the names "Orrin Hatch", "Darrell Issa" and "Secretary Burwell".

And I'm not even sure how I should be feeling about this one:

Guess I'll have to start minding my P's and Q's a bit more...