UPDATED x3: Ron Johnson's King v. Burwell "fix" is no better than doing nothing...and in some ways even WORSE

Three weeks ago I posted an entry called "Greg Sargent: GOP claims 3-legged stool won't collapse if you take away 2 of them", about the corner that the Republican Party has painted themselves into when it comes to the King v. Burwell case.

As I noted at the time, the Affordable Care Act is primarily based on a "3-legged stool" approach (as outlined by the now-infamous Jonathan Gruber back in 2010):

The problem with this solution in a vacuum, however, is that many families cannot afford health insurance at those community-rated prices. Massachusetts therefore added a third “leg” in the form of subsidies that make health insurance affordable for those below three times the poverty line (as well as some targeted exemptions from the mandate for those who were above the subsidized level but could not afford coverage). This reform has shown very encouraging results, with the number of uninsured in the state falling by 60 percent and nongroup premiums falling by 40 percent.

Gruber may have suffered from diarrhea of the mouth and had delusions of thinking he knew what was going on in the minds of others, but his description of the core of the ACA above was dead-on target.

As it stands, an adverse ruling in the King v. Burwell case would result in the 3rd "leg" being yanked away across 2/3 of the country, thus causing rates in those states to skyrocket, thus meaning that millions of people would no longer be bound by the individual mandate, thus effectively nullifying the 2nd leg as well.

The Johnson plan would keep subsidies going — for everybody across the country who would be adversely impacted by a Court ruling — until September of 2017. This is similar to the mechanism suggested in other contingency plans floated by Republicans, which also provide a temporary subsidy. The idea is to buy time to develop a more comprehensive GOP replacement for Obamacare. As Johnson himself recently put it, this would allow the future of health reform to be litigated in the 2016 presidential race.

In other words, he'd simply kick the ball down the field until after November 2016. If Hillary wins, it's her mess to clean up the moment she takes office; if the Republican wins, they'd (supposedly) repeal the ACA outright, although that's wishful thinking on their part at this point.

However, that's just half the plan. As Sargent continues:

The rub of the Johnson plan is that it would also repeal the individual mandate — as would other suggested GOP contingency fixes. At the same time, though, the Johnson bill would appear to keep in place the ban on discrimination against preexisting conditions — something other proposed contingency fixes would do, too.

...The problem, though, is that this risks driving up premiums, because healthy people might drop insurance without the mandate, leaving a sicker risk pool that is more expensive to cover, according to Larry Levitt of the Kaiser Family Foundation. Someone would have to pay for that difference.

In fact, the results would be worse, since unlike King v. Burwell, which "only" impacts 34 states (or possibly 37, depending on how the SCOTUS rules re. Oregon, Nevada and New Mexico), Johnson's plan would jack up rates through the roof in every state, even the ones with their own exchanges.

Ironically, Johnson's plan does include one very good change in the law. As Sargent notes:

There’s one other interesting point embedded in the Johnson alternative. Take a look at the language of the bill that would temporarily extend subsidies for those who would lose them from a pro-King ruling. In effect, for all of those who are on the federal exchange, and would no longer be eligible for the tax credits, the bill would substitute (for a period of time ending in September of 2017) this sentence…

‘enrolled in through an Exchange established by the state under 1311 of the Patient Protection and Affordable Care Act.’

Presto, problem (temporarily) solved! Thus, this bill shows how easily one little change — minus the end date — would permanently fix the problem.

In other words, as I put it more crudely a few months back:

Amusingly, Johnson's tweak to the wording of the law is actually simpler than mine, since he removes 6 words ("...by the state under 1311 of...") as opposed to adding 4 words ("...or the federal government").

UPDATE: Oh for heaven's sake. Thanks to Ken Kelly for this: In addition to everything else, the 20-month tax credit extension in Johnson's bill would only apply to those currently receiving credits at the time the bill was signed into law (which isn't gonna happen anyway): 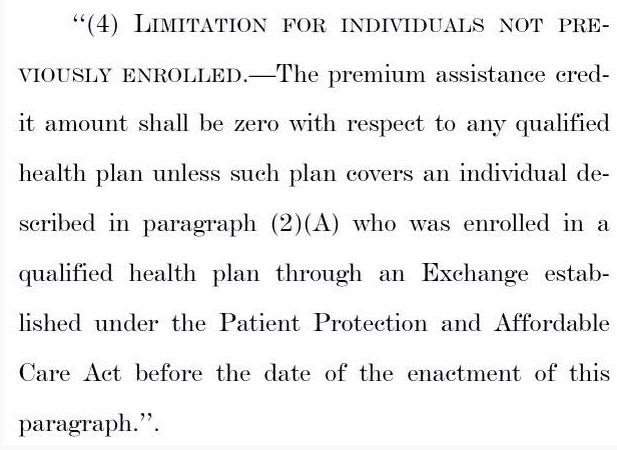 How much does this impact the numbers?

Of those, around 87% currently qualify for the APTC (Advance Premium Tax Credits), aka the federal tax subsidies. That's around 4,700 people per day who would be screwed immediately, in addition to the 7 million or so who would have their sentence delayed by a whopping year and a half.

Here's my best guess as to how the enrollment figures would plummet, starting on August 1st (since July premiums would presumably be paid sometime in June, just before the credits were torn away from new enrollees), if Johnson's plan was to be put into place. I've compared it with projected numbers based on the status quo (King v. Burwell being shot down) as well as King v. Burwell being upheld and tax credits being torn away from all HC.gov enrollees:

As you can see, for the first 7 months of 2015 there would be no changes, since any King v. Burwell fallout wouldn't start having an impact until the first month after the SCOTUS decision kicked into effect. After that, assuming no "fix" or changes to the law, nearly 6 million people would immediately be forced into dropping their exchange-purchased policies (although many probably wouldn't realize this until they received the next month's bill and had one hell of a case of sticker shock).

Assuming Johnson's bill were to be signed into law, the immediate impact would, indeed, be lessened considerably; instead of 6 million being immediately screwed, "only" about half a million would. So, you know, yay for that.

Of course, after that, starting on January 1, 2016, it would be far worse than that. For one thing, there's several million more who would otherwise be enrolling for 2016 who won't bother doing so under this plan since they'd have no way of affording QHPs for next year.

Plus, of course, this would still have the effect of jacking up premium rates for everyone else, both on and off the exchanges; not as badly as an immediate stop to all federal credits, of course, but the insurers are currently assuming they'll pick up those several million more people for 2016 when they set their rates for next year. If they have to reduce their projections significantly, that's going to play into their actuarial number-crunching.

UPDATE x2: So what would the 2016 situation look like? Well, obviously I don't know how many people will be enrolling for 2016 this fall if the King case is dismissed by the Court and everything operates smoothly, but let's assume that roughly 15 million people sign up during open enrollment, of which around 13.2 million pay their first premium. In that scenario, I would expect things to look something like the following:

In 2016, under Johnson's plan, practically no one would be enrolling via the federal exchange, and with the individual mandate gone causing rates to spike (remember, the guaranteed issue rule would still be in place), hardly anyone would be enrolling via the state exchanges either. That would essentially lock things in at whoever was still enrolled at the end of 2015 only. Assuming 95% of them renewed for 2016 and normal attrition of perhaps 2% per month, you'd be down to around 7 million by the end of the year...some 5.1 million fewer than if the King case is shot down.

Meanwhile, a King plaintiff win with no other changes to the law or the exchange scenario would mean over 8 million fewer people would be covered by the end of the year.

Finally, starting on January 1, 2017, barring any other changes, we'd be right back to the same situation if the King plaintiffs win and there was no "fix" or change of any sort: A good 6-7 million people completely SOL and another 6-7 million with sky-high premiums.

Even worse: With the individual mandate officially gone (presumably across all 50 states +DC, as opposed to it just being effectively gone in 34-37 states), Johnson's plan could potentially be even worse than no changes to the law whatsoever!

Johnson's plan is a big ol' piece of horse puckey, and should be summarily rejected by any Democrat with an ounce of sense.

UPDATE x3: Nicholas Bagley checks in with another serious flaw in Johnson's swiss-cheese farce of a "fix".