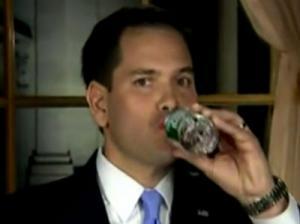 NOTE 11/3/15: This post is actually from last spring, but given Marco Rubio's recent climb in GOP primary polling, I figured it was worth dusting off...

NOTE 6/17/16: OK, I'm dusting it off again in honor of Rubio's glorious return to the political scene after his humiliating defeat in the GOP Presidential primary...

Now that Florida GOP Senator Marco "Dry Lips" Rubio has officially launched his 2016 Presidential campaign, my long-time obsession with his ill-fated "Florida Health Choices" project from his days as the Speaker of the FL House has taken on a bit more relevance.

As of December 2014, this exciting new example of the superiority of "free-market" solutions had been operating for about a year. They weren't selling actual health insurance; it was more along the lines of "discount coupons" for dental visits, eyeglasses and the like. Discount coupons which are actually kind of scammy, it turns out:

They had only managed to get 49 people to buy even those products after spending $800,000 in taxpayer funds. That works out to around $16,000 per enrollee, or roughly the cost of a small sedan.

Finally realizing (a year later) that this didn't seem to be working out very well, FL Health Choices changed tactics and decided to go head to head with Healthcare.Gov by selling actual, you know, health insurance policies. Of course, they didn't include any sort of discount or tax credits, just the private healthcare policies themselves. That means that there was no reason for anyone below 400% of the Federal Poverty Line to use FL Health Choices...and even for those who have to pay full price, there's already dozens of outlets they can use, ranging from local insurance brokers to private exchanges such as eHealth or GoHealth Insurance to just calling up the insurance company directly.

As a result, when I last checked in on Rubio's brainchild in late February, the cost to Florida taxpayers for the "anti-Obamacare" website was around $2.4 million, in return for which the Republican-sponsored "free market" exchange had enrolled exactly 42 people in true healthcare policies. That means that the good people of the Sunshine State had now shelled out over $57,000 for each of their fellow Floridians who signed up.

Today, however, according to this story about the "FL Health Choices" debacle by Rachana Pradhan in Politico, there's been a dramatic improvement in the website's fortune!

By the Feb. 15 Obamacare enrollment deadline, Florida Health Choices had signed up 56 individuals, and as of the middle of this week it had gained 24 more, CEO Rose Naff said in an interview. The state has set aside $2.4 million for the exchange since 2008 — an initial $1.5 million infusion that year and $900,000 in 2013.

Wow!! That's a whopping 80 people...nearly twice as many as a couple of months ago! Divide that into the $2.4 million in taxpayer funding and the cost per enrollee is now back down to a mere $30,000 apiece!

For what it's worth, by comparison, the much-maligned Healthcare.Gov's price tag of between $1.7 - $2.1 billion (according to two right-wing estimates) to enroll about 10.6 million (paying) customers works out to around $160 - $200 apiece.

UPDATE: Whoops...OK, that was a boneheaded mistake on my part. Those 10.6 million (paying) ACA exchange enrollees includes the 14 state-based exchanges. Since we're just talking about HC.gov itself, it'd be closer to around 8 million (paying) enrollees.

So basically, 7 years after getting started, Rubio and his GOP colleagues have managed to spend 120 times as much per person as the Big Gubm'nt Obamacare. I'm sure that things will take off any day now, however.

Of course, the Rubio camp tries to save face...

“What’s in Obamacare is neither free-market or truly an exchange,” she said. “It is unfortunate that this disastrous health care law is impacting the Florida Health Choices program, which is exactly the kind of consumer-based health care solution Americans are looking for.”

...and she might have something resembling a point about the subsidies, I suppose, except for one thing: Yes, it's true that of the 1.6 million Floridians who enrolled via the federal exchange, 93% of them did receive tax credits (an "unfair advantage" over FL Health Choices, according to this spokeswoman). However, it's also true that the other 7% didn't receive subsidies. That's still 112,000 people.

Put another way, even Florida residents who had to pay full price were still 1,400x more likely to choose a healthcare policy via the official Obamacare website than Rubio's White Elephant.

There's a bunch of other interesting backstory stuff at the Politico piece, along with speculation about how the FL Health Choices boondoggle might impact Rubio's chances, but for my part, I'm just going to illustrate this like so: 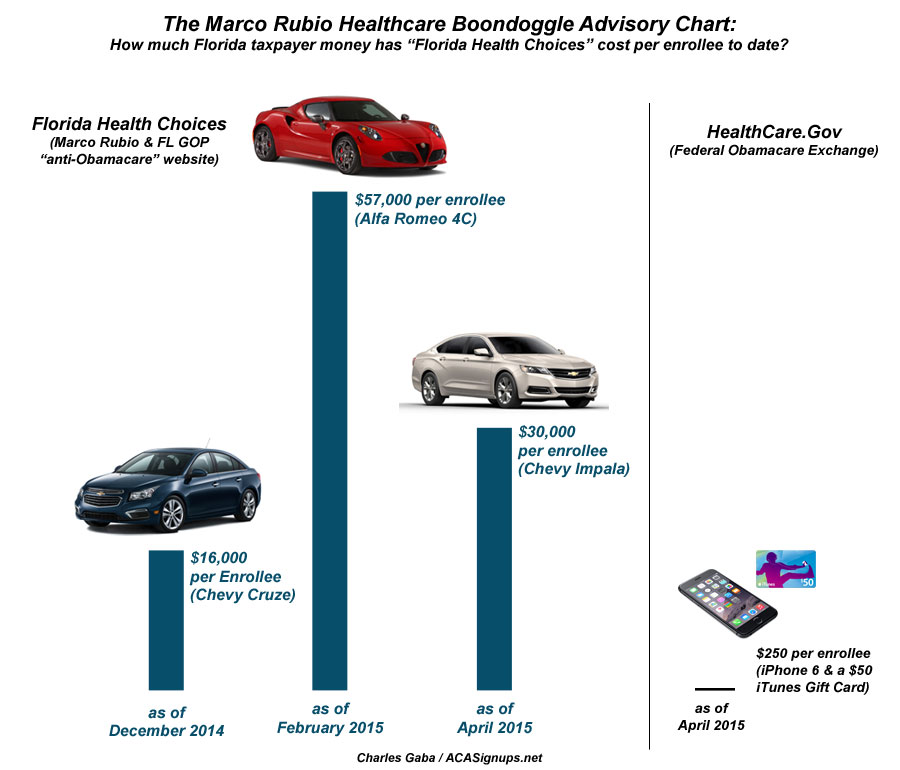