UPDATED: Well, HC.gov finally released #ACATaxTime data, but I was way off (so far)

Well, that was anticlimactic. After weeks of me whining about the lack of post-Open Enrollment data, Healthcare.Gov has finally stated (sort of buried in the middle of a press release) that around 36,000 additional people had enrolled via Healthcare.Gov as of March 29th via the Tax Filing Season Special Enrollment Period (aka #ACATaxTime):

As of March 29, about 36,000 consumers have selected plans using the tax special enrollment period in States using the Federally-facilitated Marketplace.

Now, all of those bold-faced phrases are important, because the actual Tax Filing Season SEP didn't start until 3/15, and this doesn't include any of the 14 state-based exchanges (really only 11 of them, though, since 3 states aren't offering #ACATaxTime). Also, from the exact wording, this does not include those who enrolled via "Qualifying Life Events" (ie, getting married/divorced, giving birth/adopting a child, moving to a new state, losing your existing coverage and so on).

Case in point: Senator Ted Cruz (who hates the ACA and tried to repeal it by shutting down the Federal Government a year and a half ago), whose wife recently left her job at Goldman Sachs to help run his Presidential campaign, says that he will "probably" enroll his family in new coverage via Healthcare.Gov to replace their prior policy. The only reason he's eligible to do so (since Open Enrollment closed on February 22nd) is because he qualifies due to having "lost his existing coverage").

Having said that, how does this compare with my expectations?

Well, I spitballed that nationally, perhaps 600K - 1.2M people might enroll via the #ACATaxTime SEP, but that also includes perhaps 220-270K or so who enroll during the same time period due to "life changes". Also note that you have to include a small number during the 3 weeks preceding 3/15 (2/22 - 3/15), when only "life change" enrollments were allowed. That would be around 13K - 26K per day nationally or, if you're including the prior 3 weeks, around 9 - 18K per day.

Splitting the difference and including the extra 3 weeks, I figured perhaps an extra 1.2 million even extra nationally from 2/22 - 4/30, or around 18K per day, give or take.

Next, this is only for Healthcare.Gov. Colorado, Idaho and Massachusetts aren't offering the tax SEP at all, and Connecticut didn't start theirs until today, so that leaves another 10 states not included in that 36K figure. During open enrollment, HC.gov made up around 76% of total QHP selections, and those CO/CT/ID/MA made up around another 4.2%, so I'm going to assume that HC.gov makes up around 80% of the total during #ACATaxTime.

One VERY important caveat: The #ACATaxTime enrollment pace may start to surge as April 15th approaches, just as the Open Enrollment numbers spiked as that deadline approached. My 18K/day (nationally) assumes an even spread, not a spike.

Still, I have to admit that this is significantly lower than I thought as of today; I was figuring on at least 100K or so by now.

So, assuming that there isn't a significant surge, does this mean that the #ACATaxTime period is a "failure"? No, because really, no one had the slightest idea how many people would enroll during it; my "estimate" was really just a wild guess since this is the first time anything like this has happened. Still, as always, it's always a bit of a bummer to be so far off, so I'm hoping for a spike over the next week or two (presumably things will drop off significantly for the final 2 weeks, since it'll be past the official tax filing deadline anyway).

One other thing: While the tax season-specific enrollments may be slower than expected, the off-season life event QHP selections may very well still be running at the same 8-9K/day that they did last year. So far the only real evidence I have of this is from Washington State, which reports that around 4,700 more people enrolled between 2/22 - 3/25.

That's around 9% of their Open Enrollment rate. Unfortunately, they didn't break these 4,700 out between "tax season SEP" and "life change SEP", so I don't know the ratio, but assuming that the tax season ones are a similar 2.7% of OEP rates to HC.gov, that means around 700 of those would be via #ACATaxTime, the other 4,000 via life changes.

Of course, if HHS would just keep releasing the weekly snapshots like they did during open enrollment, none of this would be necessary, but hopefully they'll provide another update after 4/15 and again after 4/30.

UPDATE: OK, with this in mind, I'm walking back my projections for both the rest of April and the rest of the year a bit.

Until now, I was assuming that total QHP selections would hit around 12.9 million as of April 30th (11.3 million paid), with effectuated enrollments hitting perhaps 10.4 million on May 1st.

Assuming that off-season "life change" enrollments are roughly cancelled out by normal attrition throughout the rest of the year, the effectuated number should bobble right around the 10.0 - 10.1 million range for most of 2015, possibly dropping a bit below the 10M mark towards the tail end of the year (click for full-size version):

1. That the King v. Burwell SCOTUS decision doesn't screw everything up (ie, causing mass policy drops starting in July as federal tax credits get cut off) 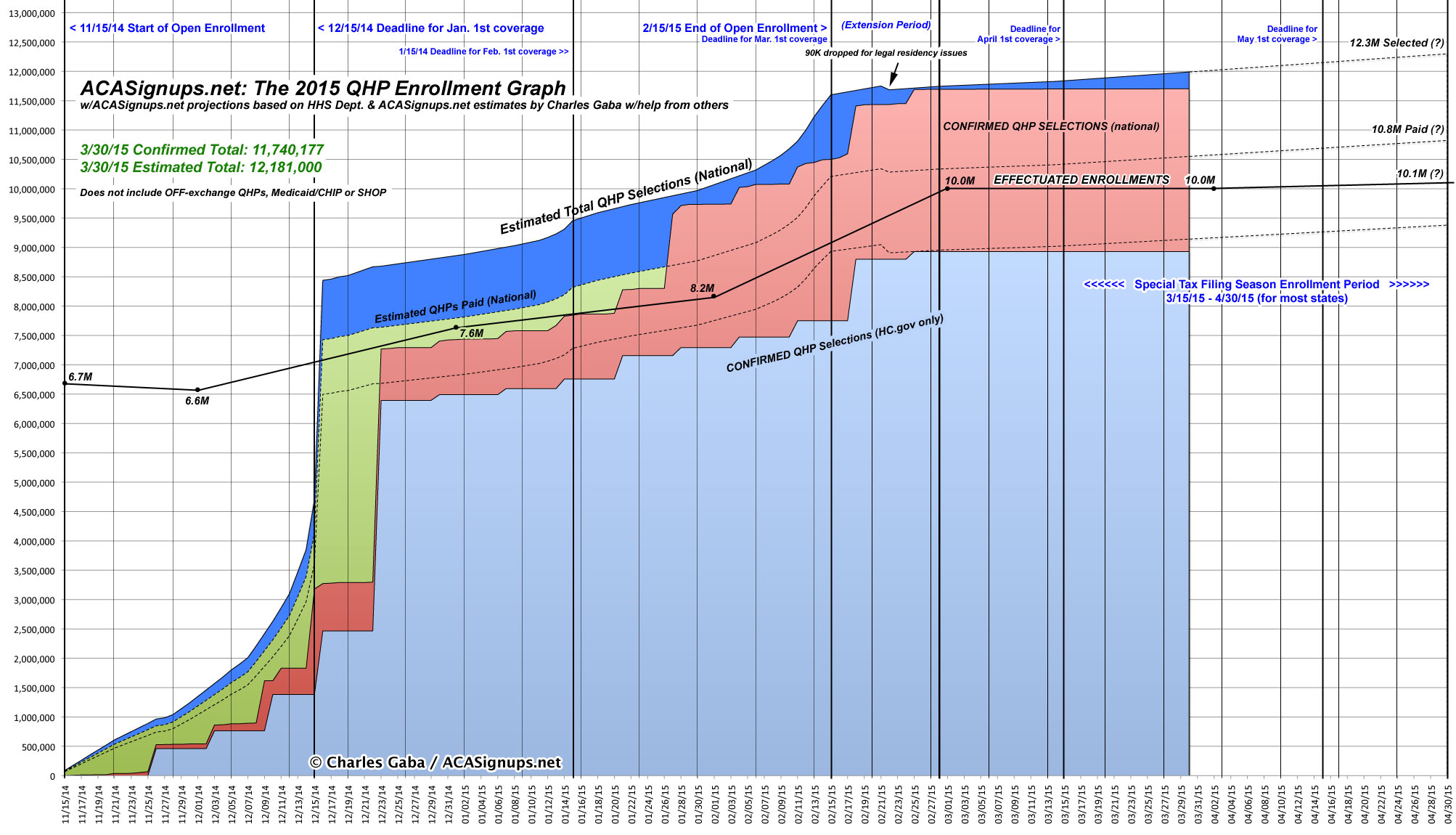