UPDATE 3/30/15: I wasn't planning on "tweet-spamming" this one, seriously. However, given that this survey is starting to get traction among mainstream news outlets, I thought it was important to take a serious look at the methodology and what the survey is really saying.

So, some outfit called the Foundation for Government Accountability released a Big Survey which claims that Americans hate Obamacare, that they "don’t expect or want states to bail out Congress or the Obama administration" and that they're "prepared to vote against their state lawmakers the next time they’re up for re-election if they set up a state exchange."

First of all, who the heck is the Foundation for Government Accountability? Well, according to Wikipedia:

The Foundation for Government Accountability (FGA) is a free market think tank based in Naples, Florida.[3]

The FGA was founded in 2011 by Tarren Bragdon, a former Maine legislator and past CEO of the Maine Heritage Policy Center.[4] The organization's stated mission is to "promote better lives for individuals and families by equipping policymakers with principled strategies to replace failed health and welfare programs nationwide."[5]

Un-huh. OK, it's a libertarian outfit, tied to the right-wing Heritage Foundation (Tarren Bragdon has a listing on their site, and the Maine Heritage Policy Center is presumably associated in some way as well). Fair enough; we know who we're dealing with here.

However, that doesn't mean that the survey itself is necessarily biased, right? Well...maybe. Red flags can be found all over the place, starting with the insanely biased language contained within the executive summary:

Voters view ObamaCare as having done more harm than good. They blame Congress for a poorly written law and they expect Congress to fix it. And they want those fixes to help everyone, not just those getting subsidies. They want those changes to make sense: more choices, the ability to buy insurance any time, and subsidies that follow people, not just exchange plans.

Voters understand that setting up ObamaCare exchanges will put states on the hook for the high operating costs to run those exchanges. They recognize that doing so will put more employers and individuals at the mercy of the IRS as it enforces more ObamaCare mandates. And they’ve seen the disastrous rollouts other states have experienced in setting up those exchanges.

Now, on the surface, the methodology looks impressive:

Results for this poll are based on live telephone interviews conducted among a multi-state sample of 1,564 adults who voted in the November 2014 general election. The multi-state sample was limited to voters in the 34 states that have not established health insurance exchanges. Data for this survey research was collected by Advantage, Inc.

The pool of 1,564 people is reasonably large, and limiting it to voters seems OK to me...although limiting it to mid-term voters specifically seems a wee bit off, since Democrats as a rule tend to have much higher turnout during Presidential years. Still, again, whatever. Hold up a second...who is "Advantage, Inc."?

Advantage, Inc. is one of the most reliable telephone contact firms used by Republican candidates and public affairs organizations. We are a creative, fast-moving company made up of personnel with decades of combined experience in political campaigns.

Again, fine: They're a Republican outfit using a Republican polling firm to conduct their polling. Presumably Democratic outfits use Democratic-leaning firms for their surveys as well, so I guess this is fine on the face of it.

However, here's the thing: This survey is limited to the states on HC.gov. On the one hand, that makes sense, since those are the states which would be directly impacted by a negative King v. Burwell survey. On the other hand, most of those 34 states are Republican-leaning to begin with, for obvious reasons: The main reason they didn't set up their own exchanges was in large part because their GOP leadership was convinced not to by libertarian outlets like the CATO Institute, the Heritage Foundation and, presumably, the Foundation for Government Accountability.

Interestingly, the FGA also chose to exclude Nevada, Oregon and New Mexico, which presumably means that they've accepted that those 3 states wouldn't be impacted by the SCOTUS decision.

What that means is that of the 34 states actually surveyed, 26 are generally considered "red" or "red-leaning", with only 8 (DE, IL, ME, MI, NH, NJ, PA, VA) being "blue" or "blue-leaning"...two of which (DE & ME) have pretty tiny populations to begin with. Furthermore, every Southern state is included in the survey. Finally, as noted above, it's based on a pool of 2014 midterm voters, not "all adults" or even "all registered voters". Midterm voters are more heavily motivated than registered voters as a whole, of course.

Needless to say, there's a built-in heavy Republican skew to the survey population right off the bat.

There's nothing necessarily wrong with this...depending on what questions you're asking and what point it is that you're trying to make.

Interviews were conducted via a computer-assisted telephone interviewing system by professional interviewers who are extensively trained in interviewing practices, including techniques designed to achieve the highest possible respondent cooperation. Questions and responses were rotated to ensure survey integrity.

Hmmm...glad to hear that they rotated the questions/responses, but I'm curious as to what these "techniques designed to achieve the highest possible respondent cooperation" were. Is that a normal polling industry thing?

Fair enough. I'm perfectly willing to accept that this is a fair, accurate, representative sampling of people who live in heavily Southern, heavily Republican states who voted in the 2014 mid-term election.

OK, so now that we know who asked and paid for the survey, who provided them with the data and who they actually polled, let's take a look at the questions and results.

The FGA claims that "nearly 50% of voters" think the ACA is bad, only 33% think it's been good. Again, that's actually "49% of mostly Southern, heavily-motivated Republican-leaning voters". Quite frankly, I'm surprised that it was that low given those demographics.

They even admit that 18% of Republicans think the ACA has either helped the country, made no difference or aren't sure. That's actually pretty good given how viscerally the GOP (especially in the South) hates President Obama and "Obamacare".

Again, that's actually not too bad given the crowd they surveyed.

This is kind of weird--they give the pie charts, broken out by total/GOP/Dem/Split ticket voters...but they don't say what the colored sections mean. Seriously, look at page 4...I'm assuming that the larger red section represents people who said they don't have family/friends who enrolled via HC.gov, but I can't be certain of that.

The accompanying text says stuff like "knowing a closing friend or family member who purchased insurance from HealthCare.gov did not weaken their opposition to the law." and "Republican and split-ticket voters who knew someone who purchased insurance through the ObamaCare exchange were even more likely to report that ObamaCare had hurt them or their family"...except that they don't bother listing the results for the (relatively small percentage of) Democratic voters who they surveyed. Hmmmmm...

So far, all this survey has "proven" is that reliable Republican voters in reliably Republican states don't like Obamacare. None of this is exactly breaking news.

Finally we come to the main point of the survey: What will voter response be if the Supreme Court rules for the plaintiffs in the King v. Burwell case?

Here's where things get interesting:

Their results state that 46% would blame Congress "for poorly writing the law"; 22% would blame the IRS "for giving out illegal subsidies in the first place"; 20% would blame the States "for refusing to establish Obamacare exchanges" and 13% were Unsure.

I'm going to assume that this was the exact wording of the only available responses, and the bias is obvious. The IRS obviously didn't believe that the federal exchange subsidies were "illegal" when they enacted that policy; that's the whole point of this case. Meanwhile, "Obamacare exchanges" is clearly being used as a pejorative here.

However, this is kind of a strawman question--everyone I know of agrees that yes, the wording was sloppy in the first place.

In fact, if you think about it, those blaming Congress for "poorly writing the law" are themselves admitting that the "...established by the state" wording at the heart of the King case was clearly NOT intended by Congress to deny subsidies to those enrolling on the federal exchange.

Now, HERE'S where the wording of the question...and the lack of a follow-up become extremely important: 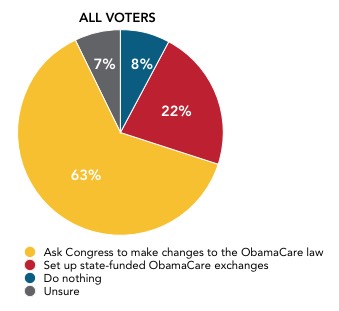 Notice that 63% say that the states should ask Congress to make changes to the law. It doesn't specify what change Congress should make...which means that the "change" requested could be as simple as "change the wording to make it clear that residents of all states qualify for federal tax credits" (which could be as simple as tacking on "...or the federal government" to the sentence in question).

The Kaiser Family Foundation, which ran their own tracking poll on the ACA recently, made sure to ask the obvious follow-up question: IF the Supreme Court does rule for the plaintiffs and if Congress doesn't change the law to make sure tax credits are available in all states, THEN what should the states do?

Their results? 69% said that the states should set up their own exchanges in that situation.

The closest that the FGA survey comes to this is several extremely biased questions later, when they ask:

The question is fine...but look at the response options:

75% say "make major changes"...which isn't exactly shocking since it includes the caveat that those "major changes" should "improve the law for everyone"

Well gee whiz! Who wouldn't want changes which "improve the law for everyone?"

The absurdity of this question makes it almost impossible for me to bother continuing. The other questions which preceded it make it clear: This is a push-poll and therefore effectively meaningless. Look at these questions:

In short, half of this survey tells us nothing we didn't already know (REPUBLICANS DON'T LIKE OBAMACARE!!). The other half is crammed full of questions and responses which are either highly misleading or completely irrelevant.

Frankly, I'm sorry I wasted this much time even reviewing it, but it's an interesting example of the lengths to which conservative extremists are going to try and screw over up to 14 million middle-class Americans.