In the midst of a pretty quiet week data-wise, the Washingotn HealthPlanFinder had a pleasant surprise: An extremely comprehensive enrollment report which breaks down their 2015 numbers every which way possible and, of particular importance to me, also includes data up through March 9th (as opposed to the Feb. 21st cut-off of most of the other state exchanges).

As an additional bonus, the accompanying press release also brings the QHP enrollment numbers even further up to date...right up through March 25th, I think (the PR doesn't specify the exact date of that number, but it's a few thousand higher than the enrollment report so I'm assuming it includes the 16 extra days).

First up: The top-of-the-fold numbers:

OLYMPIA, Wash. – Washington Healthplanfinder today announced that 165,436 Washingtonians have currently signed up for a Qualified Health Plan or renewed their health coverage through www.wahealthplanfinder.org.

OK, that's 165,436 QHPs as of (I'm assuming) midnight last night, the 25th. Also, remember that the WA exchange only reports paid enrollments, not just selections, so their effective payment rate is 100%.

For comparison, last year there were roughly 9,000 off-season QHP selections per day from late April through around mid-October (at which point things slowed down in anticipation of the 2015 open enrollment period). This year, 9K/day would be roughly about 8% the daily rate of the 117K/day open enrollment rate, so WA hitting 9% seems pretty reasonable.

The 2015 off-season table makes it look like we're at around 18-22K/day, but that's based on very limited data. Plus, it's likely to skew higher from 3/15 - 4/30 anyway since we're in the middle of the #ACATaxTime special enrollment period. As it happens, I had previously estimated perhaps 1 million QHP selections nationally during that time (perhaps 700K specifically due to the tax filing allowance and another 300K due to "normal" off-season activity)...which just happens to work out to around 22,000 per day over a 45 day period.

OK, next up? The actual enrollment report itself, which is chock full of data nerd nuggets. I won't repost the whole thing (it's 14 pages long), but here's a sample: 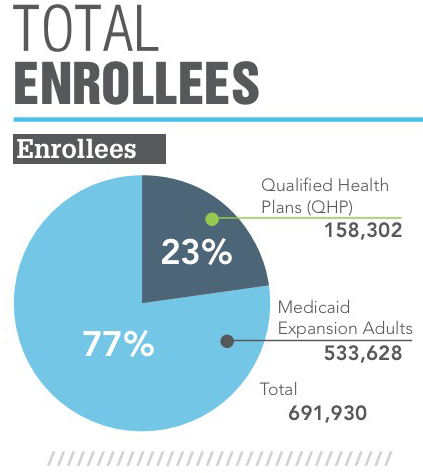 Hmmm...what's that? The QHP number is actually lower than the 2/21 number, much less the 3/25 number? What's going on there? Two things:

Unless I'm missing something, this means that 2,430 people had dropped their policies as of 3/09, or about 1.5% of the total. this is completely in line with the 2% average monthly attrition rate that I'm assuming nationally (a bit lower, actually, though it could easily increase later in the year).

This also suggests that, depending on how WA is counting things, the off-season rate has actually been higher than 147/day. That is, assuming the 165,436 figure is the number of currently paid enrollees, that means there have actually been 7,134 QHP additions since 3/09 (445/day) instead of 4,704 since 2/21 (147/day). However, in the interest of caution I'm going to assume the lower figure for now.

Washington is one of the only states which separates out newly eligible Medicaid enrollees (ie, those who are only enrolled thanks to ACA expansion) from "woodworkers" (those who were previously eligible for traditional Medicaid but never enrolled before). The grand total as of 3/09 was 533,628 people, or about 24,000 higher than they ended 2014 with.

Yeah, the SHOP program continues to suffer nationally as a whole and in WA state in particular; as of 3/09, they only had 72 employers actually enroll in SHOP policies state-wide, for a total of just 360 covered lives (employees plus dependents).

There's also one other graph which I find really interesting: The monthly number of effectuated enrollments starting from way back in January 2014: 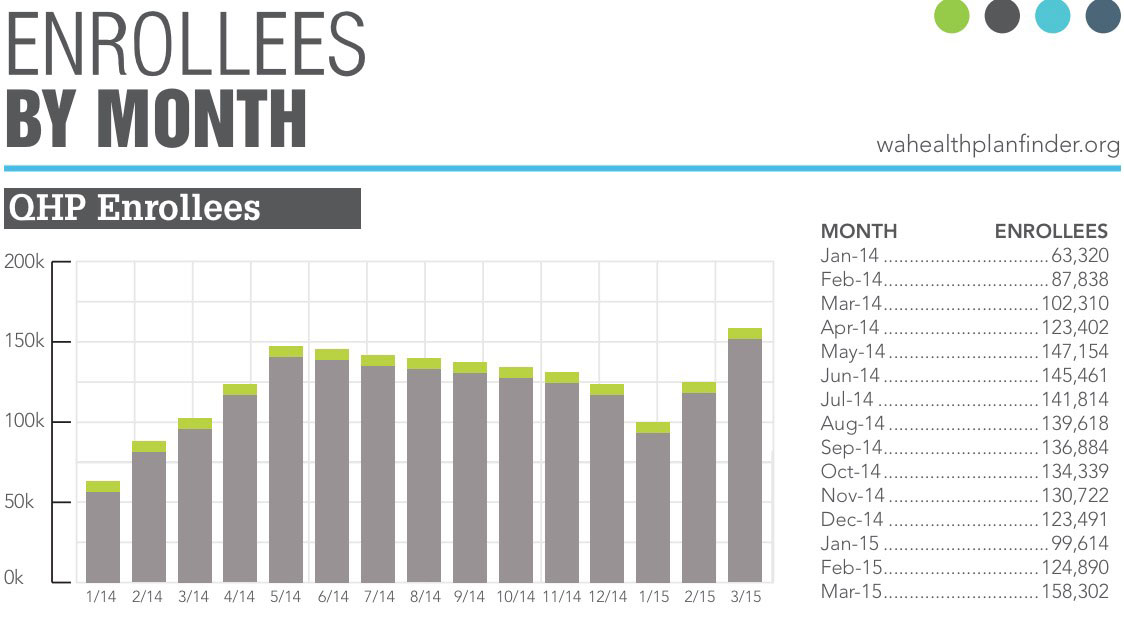 Compare this against my own estimate of the monthly effectuated enrollments nationally (2014 and 2015...everything to the right of the vertical black line is a future projection:

I'd say they line up pretty closely overall.