So, the big ACA data report of the day is the Kaiser Family Foundation's report about 2014 federal tax credit reconciliation--that is, they've issued a big report filled with number-crunchy goodness regarding how many people qualified for "Advanced Premium Tax Credits" last year (aka APTC, aka "Federal Tax Subsidies"), how much they overpaid, how much they underpaid and so on. Lots of good stuff here.

The major takeaway (judging from my Twitter feed, anyway) seems to be one particular point: About 50% of those who received the tax credits underestimated their incomes to the point that they have to pay back an average of $794 per household (important: That's per household, not per individual enrollee).

Now, the other major news here is that 45% of APTC recipients overestimated their incomes by a similar amount, meaning that they'll receive an additional little windfall of around $773 per household, which is awesome for those folks.

From the perspective of the IRS, CBO and Treasury Department, it sounds like it'll all end up being close to a wash. However, from a human impact perspective, there's a lot of concern this a.m. about the couple of million people who are gonna get hit with a nearly $800 punch to their wallet. Since these folks are generally low-income to begin with (there's a small percent in the 300-400% of FPL level, but the vast bulk appear to be in the 100-300% FPL level), having to pay $800 more in taxes is obviously a Big Deal for them.

I'm not trying to make light or minimize this. At the same time, however, I'm not sure I understand how this is all that different from any other tax increase due to your income turning out to be higher than you thought it would be.

If you've made $30K/year from 2010 - 2013, assumed you'd make $30K in 2014 as well, and then turned out to actually make $40K, then yes, you'll have to pay back some or all of the tax credit you received via the ACA exchange. However, your income tax will be higher due to, you know, your income being $10K higher than you thought as well. This is just one aspect of that as far as I can tell.

Case in point: My own family is among those who will have to pay something back to the IRS due to our income being higher than expected. We thought our 2014 income would be a certain amount, it turned out to be higher, so we have to pay back $276. Now, that's a bummer, but we knew how it worked so it was no big deal for us. Plus, we're in the 300-400% range, and the dollar amount was at the lower end, so it doesn't impact us that much; it's more of an annoyance than devastation.

It's also been pointed out to me that in addition to being among those who are obviously well-versed in how the ACA tax credits work in the first place, both of us are also self-employed...which means that we're used to our income (and therefore, our taxes) bouncing all over the place from year to year. Most people in the APTC pool are presumably working at fairly steady-paying jobs and therefore aren't used to much of a change in their annual income one way or the other, so they're not used to having to keep an eye on stuff like this.

Here's the part that bothers me, however:

Pretty significant problem for a lot of households, and if Congress could get past the nonsense about repeal, maybe it could fix this. (2/2)

After some back-and-forth about the first part of this statement (in which the points above were raised), I'm still not sure I understand how Congress could "fix" this particular problem.

However, that's obviously not what Mr. Flavelle is referring to...although I'm not sure I understand what he does mean here.

This strikes me as a purely education/outreach/awareness problem. People in this income level need to be made fully aware of what the consequences will be if their income ends up being higher than they thought, period.

I mean, seriously, the only significant thing I think which could be done to prevent this issue going forward is to change this... 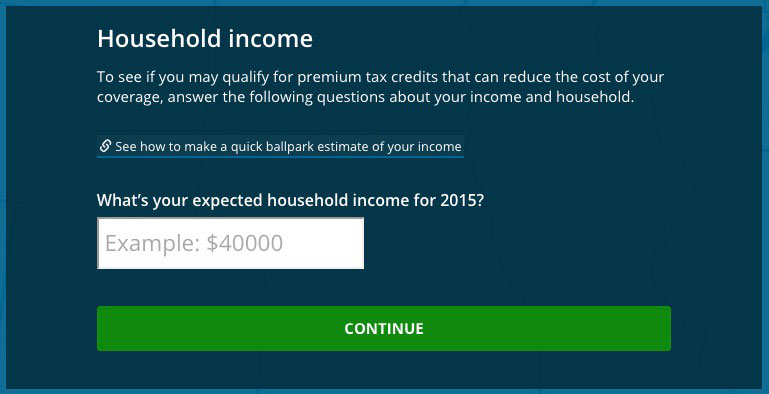 ...to this (with the checkbox required before they move on): 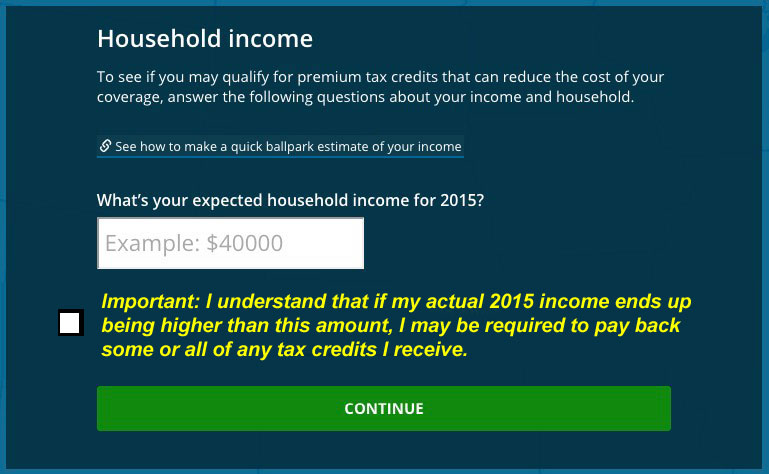 Of course, it certainly doesn't help matters that ACA opponents keep spewing blatant lies about how the law works, what the regulations are and so forth; that clutters up the "signal to noise" ratio something awful, making it that much more difficult to disseminate accurate, useful information.

However, beyond that, it's a lesson that a bunch of people are learning this spring...the hard way, it appears.