Of course, he also failed to register other domains such as TedCruzForAmerica.com or (for those who don't know how to spell his name) TedCruze.com.

Long-time followers might remember that a year and a half ago, when I launched this project, there were a handful of others out there who were also attempting to do "live tracking" of ACA enrollments. One by one they gave up, either out of lack of interest, frustration with not being able to suss out the data or, in one case, because they got pouty and decided to take their ball and go home:

EnrollMaven.com is openly opposed to the Affordable Care Act, but they're quite up front and transparent about this, and so far their methodology and sourcing has been sound. They don't include Medicaid/SCHIP expansion numbers, because their only concern is the number of actual enrollments in private Qualified Health Plans (QHP's), which is fine. I often use them to cross-check my own data.

UPDATE: They haven't updated their own site since January 1st, an eternity in this situation. I've moved them to "inactive" status until further notice.

To clarify: I posted that on February 3rd, 2014. Over a year later, out of curiosity I decided to take a look and see whether they've since updated the site...and was surprised to see the following:

Still thinking about your News Year’s resolutions? Make sure having health insurance is on the list. In addition to eating healthy and staying active, getting covered is one of the best things you can do for your health this year. Here are five reasons why you should #GetCovered for 2015:

1. You can afford it

Fact: Nearly 8 in 10 current Marketplace consumers can find coverage in the 2015 Marketplace for $100 or less, taking into account any applicable tax credits.

You can read more about the other 4 reasons at HHS.gov

Oh, by the way: In other hilarious Ted Cruz campaign website news, it seems that he's also forgotten to place the donation page (you know, the one which is supposed to be on a secure server for credit card transactions) behind an SSL (secure socket layer) certificate...and even when you do bring up the certificate...well, I won't spoil that for you. It's too good.

*Seriously, he could be McCarthy's grandson...and I'm not just talking about the eyebrows... 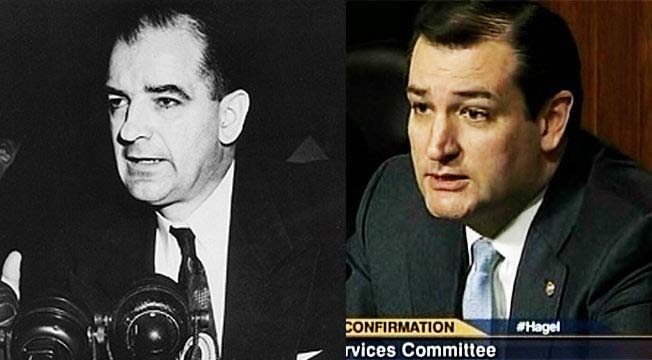