OK, this one came out of nowhere, but it's helpful: The Assistant Secretary for Planning and Evaluation (ASPE, the source of the official monthly ACA exchange enrollment reports) and the Director of the Office of Health Reform at the Health & Human Services Dept. just released a new report which states that:

Today, a year later, the official number claimed by the HHS Dept. is 2.3 million...which on the one hand is right in the middle of the range I settled on (seriously...it's right in between 1.6 and 3.1 million)...but on the other hand, it's also a good 800K lower than the 3.1 million they claimed for the better part of a year. SEE UPDATE BELOW

OK, so it's lower than they said at the time, but why am I still reluctant to tout the higher, 16.4 million "total" number? Well, mainly for the same reason why I stopped listing "Sub26ers" on the Spreadsheet at all this year. As I said last November:

Here's what you have to remember about including "sub26ers" from before the exchanges launched: Given the 7-year age range of this provision (19 - 25 years old), it means that a high percentage of the 2.3 million referred to in the report have since turned 26 or older (ie, if they were 21 in 2010 when the provision first started, they're 26 now; if they were 22 then they're 27 now and so on). Of course, many of those were replaced by new young adults who were between 13-18  in 2010...but there's just too many overlapping factors at play here for me to use a date earlier than 10/1/13 as my preferred "starting point" in terms of overall reductions in the uninsured rate. 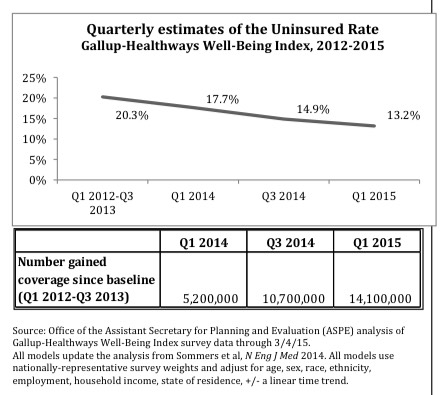 The report includes a little graph which shows the steady reduction in the uninsured rate over the past few years (at right), but to be perfectly frank, it's a bit confusing due to the "aggregate" nature of the dates. The 20.3% "starting" uninsured percentage is an average of the time period ranging from Q1 2012 - Q3 2013 (just before the exchanges launched and Medicaid expansion kicked off). That's a blend of 7 quarters, or 21 months. For one thing, the total U.S. population went up by several million people during that time; for another, as I just noted, kids aren't included in any of this, nudging the numbers around even further.

The irony here is that they could have touted the "35% reduction in the uninsured rate" just as loudly if they had used October 2013 as the starting point. According to Gallup, in Q3 2013 the adult uninsured rate was 18.0%, and was down to 12.3% as of February 2015. That's a reduction of 31.7%, and doesn't include children under 18 or the 2 million or so exchange enrollees whose policies started on March 1st (as well as a bunch more Medicaid/CHIP enrollees). Throw those into the mix and I'm pretty confident that the overall insured rate is indeed down 35% since just 10/1/13.

UPDATE: Hmmm...OK, perhaps as a proponent of the ACA I'm just "overcompensating" here. Here's the actual wording of the sub26er data from the report:

Young Adults: Coverage gains for young adults aged 19-25 started in 2010 with the ACA’s provision enabling them to stay on their parents’ plans until age 26. From the baseline period through the start of open enrollment in 2013, the uninsured rate dropped from 34.1% to 26.7%, which translates to 2.3 million young adults gaining coverage.*

According to Larry Levitt of the Kaiser Family Foundation:

@charles_gaba @JeffYoung All these estimates have some uncertainty around them, but the 2.3 million figure for young adults is defensible.

@charles_gaba @JeffYoung The under 26 provision had taken effect by 2013, so whatever the estimate is, it should be in addition.

Also, according to the technical notes included in the report, they've already accounted for the 800K difference:

We used NHIS data to update our earlier estimates of the impact of the young adult dependent coverage provision of the ACA that took effect in September 2010.1 In this current brief, we used a baseline period stretching from Q4 2009 through Q3 2010 and compared it to the post period defined as Q4 2012 through Q3 2013. Because we have more data available now, we updated our earlier estimate published in June 2012 (which used a single quarter of data), using longer pre and post periods in order to smooth away random variation in the uninsured rate. This reduces the influence of random variation in the estimates of the number of uninsured on the exact start and end dates for the analysis, but could allow either more or less opportunity for confounding from other factors.

Our estimate showed an additional 2.3 million young adults gaining coverage. We also performed a sensitivity analysis in which we smoothed only the post period and used Q3 2010 as the baseline yielding an estimate of 2.8 million additional insured young adults. Thus our core estimate, 2.3 million, is more conservative. We note that individuals move into and out of the 19-25 young adult cohort as they age, so the 2.3 million is an estimate of the increased prevalence in coverage at a specific point in time. It is not a longitudinal estimate of all individuals who may have benefited from the provision at any point in time since 2010, which would be considerably larger.