#ACATaxTime: Let the Speculation Begin...how many more will enroll by April 30? 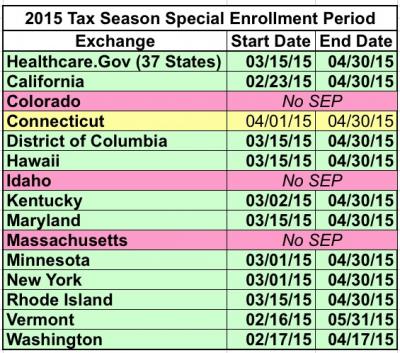 OK...technically speaking, 6 states had already kicked off their Tax Filing Season Special Enrollment Period starting as early as February 17th (Washington State), but for 40 states (plus DC) states, the "encore" edition of 2015 ACA Enrollment officially began today. Connecticut doesn't start theirs for another 2 weeks, and 3 states (CO, ID & MA) are not offering a "tax filing season" SEP. However, those three, like every state, still have the "normal" off-season SEP for people who have significant life changes such as getting married, divorced, giving birth, adopting a child, losing their other coverage or moving to a new state.

Just as a few states starting this SEP early, 2 (Vermont and Washington State) are also ending their Tax Season SEP later than the rest. However, for 46 states, the cut-off is April 30th.

With that in mind, aside from the King v. Burwell SCOTUS decision (which isn't expected until sometime in June), the other Big Mystery is just how many people a) qualify for the #ACATaxTime SEP, and b) how many of those will actually enroll during this (roughly) 6-week period.

The answer to the first question (how many actually qualify nationally), the answer appears to be up to 6 million people...but that's a very rough estimate with a lot of caveats. The source for the "6 million" figure is a U.S. Treasury Dept. statement from late January about how many Americans may end up owing the non-coverage fee for 2014.

However, even that is subject to a bit of confusion, since two different stories give the figure as either 6 million people or 6 million households:

If we're talking about 6 million households, that could mean up to 15 million people, assuming about 2.5 people per household.

UPDATE: OK, I've already received confirmation from Stephanie Armour (who wrote the WSJ article) that the figure given was, indeed, up to 6 million households, so we could indeed be talking about as many as 15 million actual people here.

UPDATE x2: I pointed out to Ms. Armour that these 6M households (actually between 3-6 million based on 2-4% of 150 million households filing taxes nationally) are likely to consist primarily of those in the 138% - 400% FPL range, since those below that income range can't/won't purchase via the exchanges anyway, and the vast majority of those above that range are almost certain to be insured already anyway.

Therefore, the question is, what's the average household size of the 3-6 million households in this pool?

Larry Levitt of the Kaiser Family Foundation made the counterpoint that a lot of children in households in this income range likely qualify for CHIP or Medicaid even if the parents don't, which means we're probably talking about more like 1.5  people or so per household instead of  2.5...which would bring the potential pool down to perhaps 4.5 - 9.0 million actual people.

UPDATE x3: Confusing things further, it was also pointed out to me that the 3-6 million households include some number (likely around 20% or so) who qualify for an exemption from the non-coverage penalty, which means the range is presumably back down to between 3.6 - 7.2 million people.

OK, so with that out of the way, how many will enroll? Well, again, there's absolutely no way of knowing, but for my part, a couple of weeks ago, after an initial pulled-out-of-my-butt 1.8 million, I spitballed an even 1 million:

That brings me to the first edition of the 2015 Tax Season / Off Season Enrollment Projection Table:

As you can see, so far there's only a handful of states which have provided any enrollment data since the end of Open Enrollment (2/22 for HC.gov + CA, 2/21 for the other 13 state-based exchanges). Don't be fooled by the impressive-sounding numbers, though; this is very limited data (only 5 states, and only a few days for most of those). In fact, I even deliberately left out the DC update from the other day for being highly questionable (it seems to be a cumulative number including everyone since 10/1/13, and would result in the enrollment rate being higher since 2/22 than during open enrollment itself, which makes no sense after all). These numbers will change rapidly as additional time/data comes in before settling down over the next few weeks.

Now, if you ignore all of these caveats and just look at the lower-right corner, it looks like Tax Season SEP enrollment is running at around 30% of the daily rate during Open Enrollment...which would mean around 26,800 per day, or 1.2 million more by the end of April.

However, the only state which I'd pay close attention to so far is Minnesota. It includes more post-Open Enrollment time than any other state (15 days), and is the only one of the 5 with data which started their Tax Season SEP prior to today (MN kicked theirs off on March 1st).

So, what does that single state tell us? Well, Minnesota averaged 609 people per day during Open Enrollment, and has averaged 94 per day since then. That's about 15% of the daily rate. If that proves representative of the country at large, we'd be looking at roughly 13,400 per day, or about 600,000 more people between today and April 30th.