The good news is that MNsure is continuing to provide off-season enrollment reports. The only bummer is that they appear to have switched to monthly reports, but I guess I can live with that:

MNsure provides a robust enrollment metrics summary to the MNsure Board of Directors at each regularly-scheduled board meeting. This page will be updated on board meeting days.

Unlike today's DC update, which seems highly questionable due to the "...since Oct. 2013" wording, MNsure's report only includes 2015 enrollments, and the numbers, while still impressive, are much more reasonable. 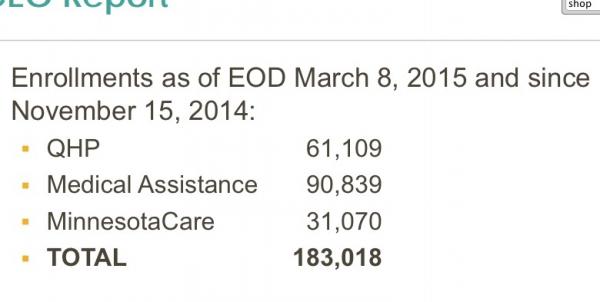 By comparison, they enrolled 597/day during the actual Open Enrollment Period (including the "waiting in line" extension. That means that so far, MN is enrolling people during the off-season at around 15% their OEP rate.

One thing to note, however, is that unlike most states which aren't starting their #ACATaxTime special enrollment period until Sunday, Minnesota already started theirs on March 1st. This means that in MN's case, at least, their off-season tally is being padded by people taking advantage of the tax season SEP, although I can't imagine they're gonna bother separating those folks out from the "normal" off-season crowd.

On the other hand, this number only includes the first 8 days of MNsure's tax season SEP; there's no way of knowing whether this rate will go up or down as April 15th approaches.

Meanwhile, Medicaid and MinnesotaCare are up to 90.8K and 31K respectively.