CBO: ACA to cost less than previously thought, plus some other interesting items

There was a lot of fuss yesterday about the new CBO report which now projects ACA federal tax credits to end up costing about 20% less than previously estimated over the next decade. This is great news, although the reasons for it can be seen as either good or bad depending on your POV:

The Congressional Budget Office previously projected that 12 million people would be covered by insurance policies obtained via an exchange this year. But it has reduced that prediction to 11 million, in part based on the expectation that a significant number of enrollees will give up this coverage, either to obtain insurance elsewhere or to become uninsured.

In other words, they've "moved the goalposts" (as Republican detractors would put it) from 13M, to 12M to just 11M for 2015. I'll go you one further: According to my own projections, assuming that my spitball estimate of around 1 million people enrolling during the #ACATaxTime SEP (roughly 3/15 - 4/30) proves accurate, the average monthly enrollment for 2015 should end up being more like 10.1 million in the end. OK, that doesn't sound good.

HOWEVER, the reason for this reduction in ACA exchange enrollments kills off a couple of additional anti-ACA talking points:

In other words, a couple million fewer will enroll via the exchanges because employer-sponsored insurance is expected to increase by 2 million.

So much for the "Obamacare will cause employers to dump their healthcare coverage and pay the tax instead" attack (some employers are doing this, but again, that's not necessarily a bad thing since it reduces the "job lock" problem), as well as the "Obamacare is a job-killing monster!" attack (actually, 11.9 million jobs have been created since the ACA was signed into law, including almost 1 million in the healthcare industry).

Another reason for the reduced cost of the ACA is a lower-than-expected increase in Medicaid/CHIP enrollment:

The Medicaid and Children's Health Insurance Program rolls are now expected to grow by 14 million people over the next decade. In its prior report, CBO had estimated that 16 million people would sign up for these programs during those years.

On the one hand, again, this isn't necessarily a bad thing. If the reason for the lower enrollment in these programs is due to people having better financial situations than they otherwise would have, that's a good thing! If the reason is because they still qualify but are being stymied by misinformation or Republican roadblocks, that's a bad thing.

On the other hand, I'm not sure I understand how they can think Medicaid/CHIP will "only" increase by 14 million over the next 10 years, considering that it's already up at least 11.7 million (as of the end of December), and I'm pretty sure they're already up 14 million thru today. Perhaps the CBO isn't counting "woodworkers" or "bulk transfers", but those folks are still new to Medicaid/CHIP, which is the relevant issue from their POV, so I must be missing something.

A few other noteworthy items (see tables below):

This means two things: First, the CBO is assuming that the Supreme Court will not kill off the federal exchange tax credits (if that happens, exchange enrollment would plummet to perhaps 3-4 million at most). I don't know if this is a sign of confidence on their part, or if they're simply not allowed to make assumptions about legal changes in the future--they probably have to make their projections based on the law as it stands today, and will only make such an adjustment in July if the SCOTUS does drop the bomb in June.

Secondly: Why on earth are they expecting exchange enrollments to shoot up from 11 million to 21 million? Well, the other numbers show that they're expecting employers to drop about 5 million more people from ESI next year, preferring to pay the $2K/head tax instead (in response to the employer mandate, no doubt). In addition, they're expecting another 1 million people on "grandmothered/grandfathered" policies to make the move to ACA exchange QHPs. Presumably the other 4 million additional enrollees will be people who got hit with the Individual Mandate tax penalty this year ($325/person or 2% of taxable income) and were finally goaded into taking the plunge to avoid the even stiffer penalty for 2016 ($695/person or 2.5% of taxable income).

In 2014, the CBO originally projected 7 million, lowering it to 6 million after the technical meltdown. The final monthly average came in at around 5.5 million.

Based on this, even I'm skeptical that the exchanges will hit 21 million next year (assuming King v. Burwell doesn't blow everything up, of course). I don't have my own estimate as of yet, and won't be making any projections until next fall, but 21M sounds a bit unrealistic to me.

The CBO originally expected 2 million people to be enrolled via the Small Business Health Options Program. They abandoned this estimate last year when only a handful of states were able to even launch their SHOP exchanges due to the massive technical problems.

For 2015, the best estimate I have is that perhaps 330,000 people have been enrolled via SHOP to date. Of course, SHOP is year-round, so this number should go up a bit more, but I don't see it ending the year at more than 500K at most.

There's some other interesting stuff as well, but those are the main things which jumped out at me. 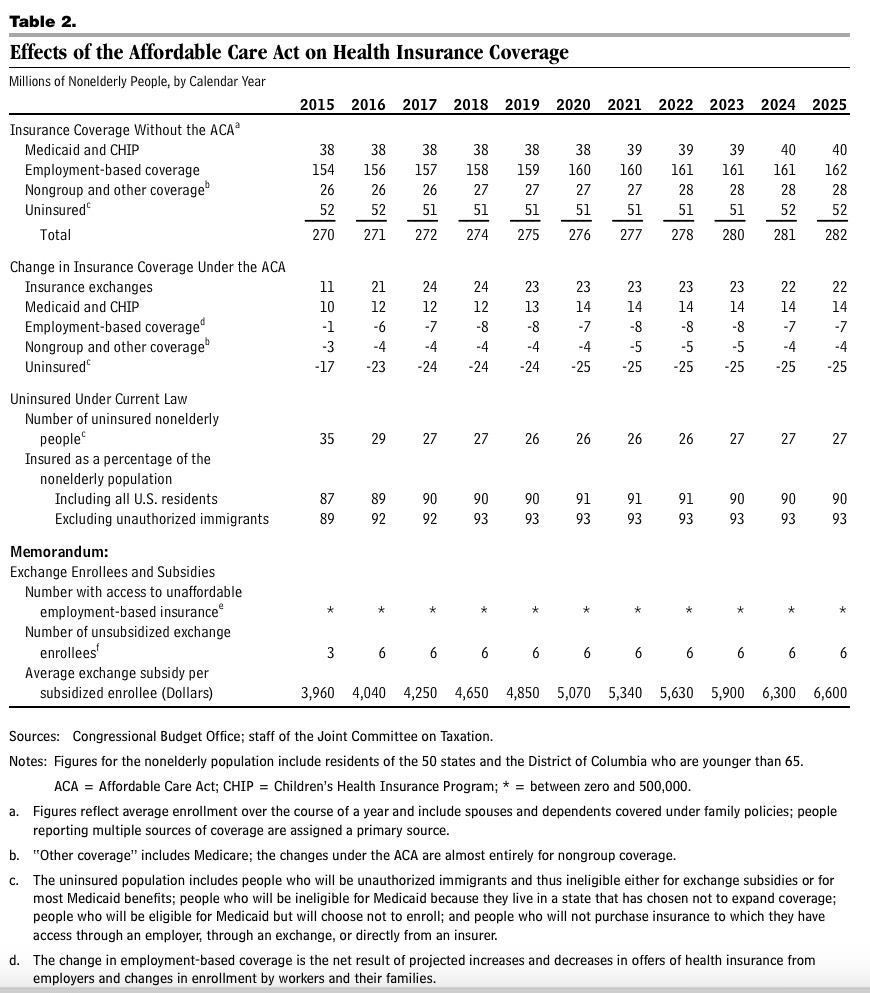 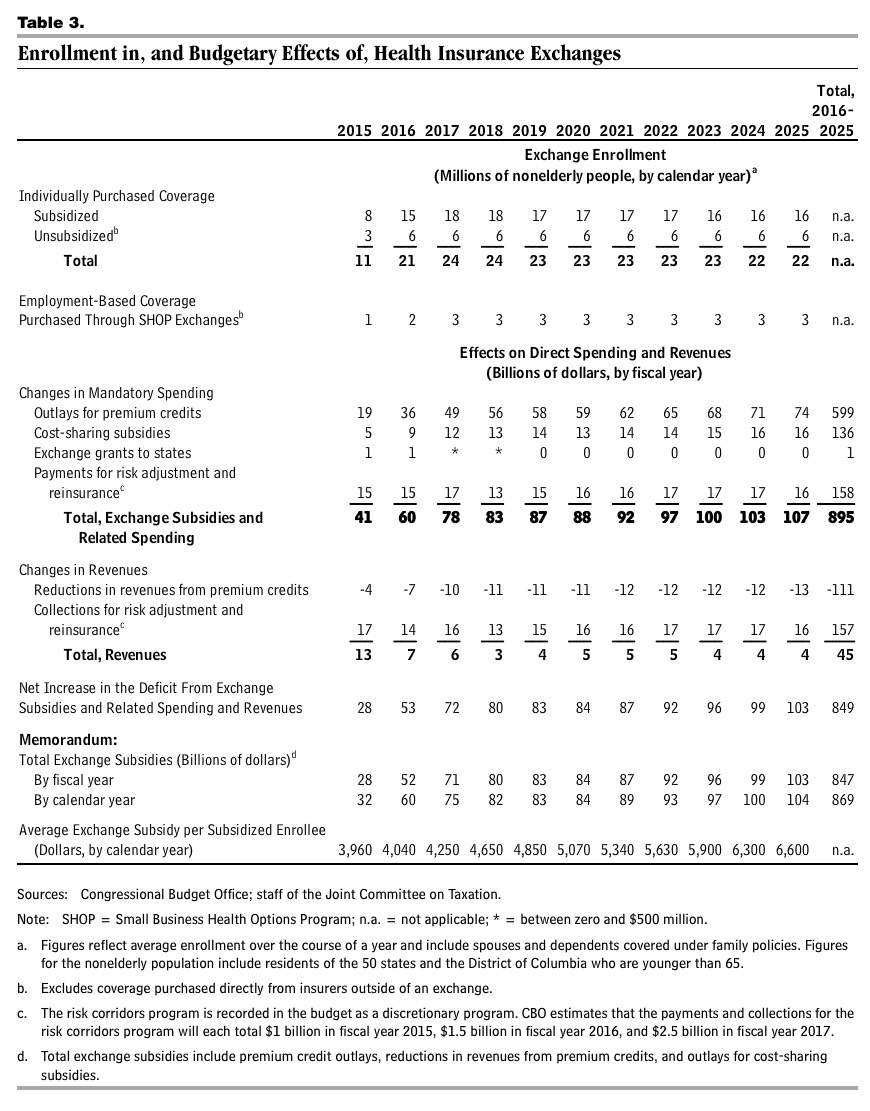