On Friday, the MA Health Connector confirmed 134,000 QHP selections out of 237,000 people determined eligible for QHPs as of 2/18. Since then they've added another 6,614 QHP determinations.

For most of the 2015 open enrollment period, the number of people actually selecting a plan has hovered between 45-50% of the total determinations. However, as of last Thursday it had shot up to over 56%, and given that today is the final day to enroll for most people, it's a pretty safe bet that anyone who has bothered going through the trouble of creating an account, logging in, plugging in all of their info and submitting an application is also going to complete the process by actually checking out a policy (and presumably paying their first premium, since today's the deadline for that as well).

Therefore, I'm pretty sure that the total is well above 140K by now, and likely somewhat higher than that (since that would still leave another 103,600 people who had previously submitted an application but not completed the process as well).

Again, today's the final (extended) deadline for Massachusetts residents. In addition, unlike most states, MA has not announced any sort of "tax season" enrollment period as of yet, so it's conceivable that today will be the deadline for most Bay Staters. Tomorrow's report--which will add today's activity-should see some sort of final-day surge (of either new accounts, "already determined eligible" completeions or both).

Meanwhile, Medicaid/MassHealth enrollments have shot up to nearly 272,000. 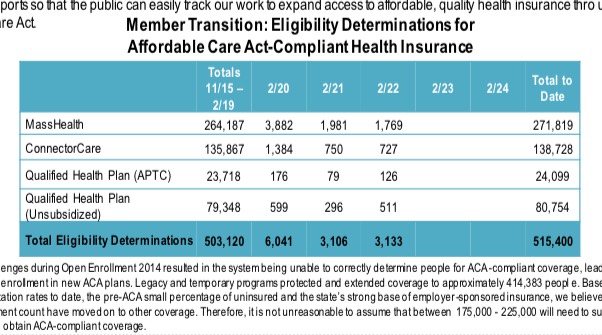