OK, this is just silly. Last night the official announcement stated that 11.4 million people "signed up for" private healthcare policies via the ACA exchanges, right?

Well, check this out:

Of the 11.4 million, 8.6 million consumers selected a plan or were automatically re-enrolled in the 37 states that use the HealthCare.gov platform. In addition, preliminary analyses of data provided by State-Based Marketplaces show that about 2.8 million consumers selected plans or were automatically re-enrolled between November 15 and February 15 in those states. Further details about plan selections from State-Based Marketplaces may be announced by the states and will be included within the upcoming monthly enrollment report.

Yeah, but here's the thing: Take a look at the actual HC.gov report itself: 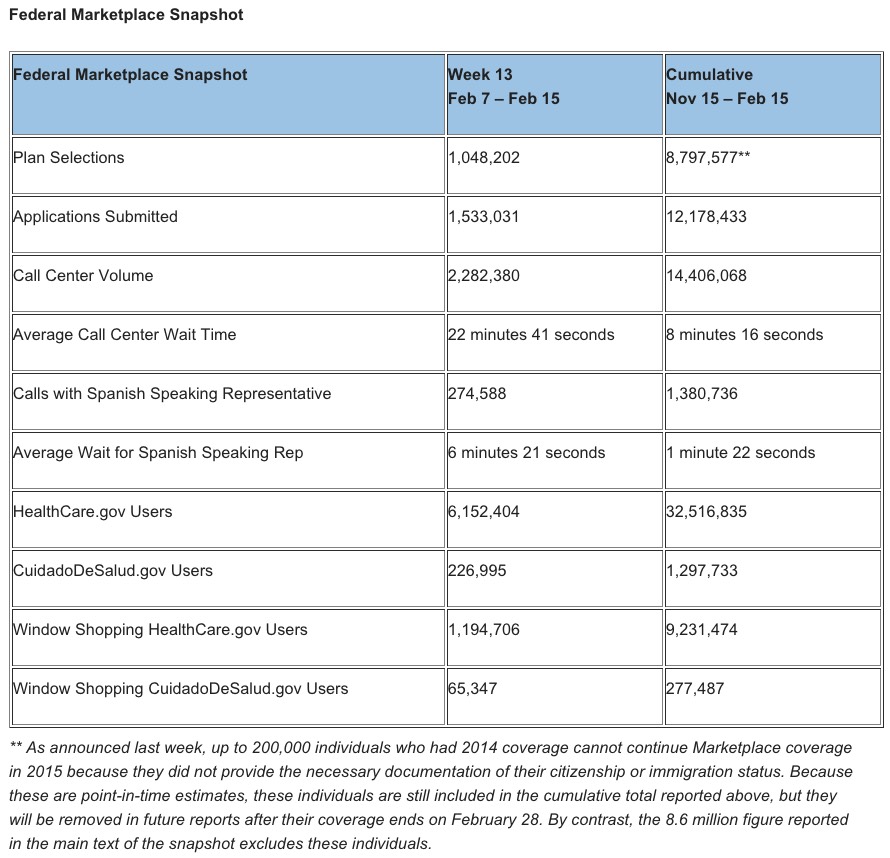 What accounts for the nearly 200K difference? Check out the footnote:

** As announced last week, up to 200,000 individuals who had 2014 coverage cannot continue Marketplace coverage in 2015 because they did not provide the necessary documentation of their citizenship or immigration status. Because these are point-in-time estimates, these individuals are still included in the cumulative total reported above, but they will be removed in future reports after their coverage ends on February 28. By contrast, the 8.6 million figure reported in the main text of the snapshot excludes these individuals.

Yes, they announced the 200K renewed enrollees who will be dropped on 2/28. I wrote up an entry about it at the time.

I just kind of figured that these folks would be considered part of the attrition factor (like the 12% who likely won't pay their first premium, or the 4% more who are likely to drop their coverage by the end of 2015). They still selected a plan, which is where my projection of 11.9 million as of Sunday came from.

Or, to take the focus off of me, those 200K have already been accounted for in the 11.4 million announcement. That means they don't have to be "subtracted" again at a later time (allthough there will still be another good million or so people who don't pay/etc).

Now, I still overshot the mark by 300K, of course, but this certainly puts more of a spring in my step today!

Furthermore, note that there were still another 3.38 million potential enrollees who have until February 22nd to complete the process. Many of these are likely duplicate accounts and so on, and some people have changed their minds or gone elsewhere since submitting their application, but that's still a hell of a potential pool of enrollees.

As for the actual state breakdown:

One other important point: Last fall, HHS dropped 112,000 enrollees for the same "legal residency verification" reason. However, in that case they didn't provide a state-by-state breakout of where those dropped enrollees came from. This time around, it sounds like they will be breaking out the 200K by state and subtracting them from the numbers going forward, which is fine with me...as long as they note it on the reports:

** State totals include up to 200,000 individuals who cannot continue Marketplace coverage in 2015 because they did not provide the necessary documentation of their citizenship or immigration status. These individuals will be removed in future reports as their coverage ends.