But by February 18, the exchange was offering an extension to people who tried to enroll by February 15 but were unable to do so by the deadline.  This has not been published on the exchange website, but an exchange representative confirmed that the extension runs through February 23, and that the call center (855-899-9600) will help enrollees complete the process between now and then.

Special Enrollment Period Announced for Those that Face Tax Penalty

In an effort to raise awareness and lessen the tax burden for some Minnesotans, MNsure will offer a Special Enrollment Period for individuals who are required to pay a penalty for being uninsured in 2014 as they file their 2014 tax return.

This Special Enrollment Period will begin on March 1, 2015, and end on April 30, 2015. These individuals will still be responsible for the 2014 tax penalty, but this Special Enrollment Period will help eliminate or minimize 2015 tax penalties for those who enroll. Coverage would begin on April 1, May 1 or June 1, 2015, depending on timing of enrollment.

Unlike Washington State, Minnesota's press release doesn't go into much in the way of detail about restrictions on enrollees. It sounds like this only applies to those who got hit with the 2014 tax penalty for non-coverage (1% of their income or $95/person). However, I don't know if they're actually planning on requiring proof of this (a copy of the tax return, etc), or just going on the honor system. Either way, it's a full 2-month period (WA's runs from 2/17 - 4/17; Minnesota's runs 3/01 - 4/30).

While they're at it, MNSure has also issued their official enrollment update:

Hmmm...OK, rolling the SHOP enrollments in with the individual/family policies is a cute touch. MNsure's previous tally was just 49,238. I don't know if they've been including SHOP all along, but my guess is they probably haven't been, and are doing so now to help beef up the numbers. Then again, the only reason why they need higher enrollment figures is to cover the budget of running the exchange.

As long as the SHOP enrollments also provide the fees to help cover the cost, there's nothing wrong with including them here...although I do wish they would have broken them out separately. Fortunately, their executive board presentation breaks it out...1,419 of the total are SHOP enrollees; 58,673 are individual QHPs: 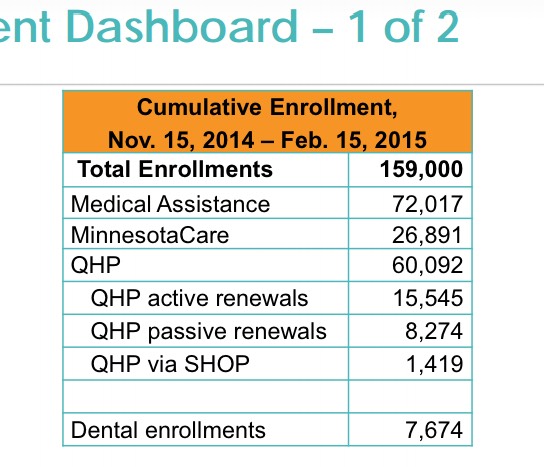 My theory on rolling them in is supported by the next paragraph, where dental plans are specifically called out as well:

These numbers are preliminary and are not yet final. MNsure hopes to have a more complete number in the coming days. In addition, MNsure enrolled 7,674 Minnesotans in a “dental-only” plan during the 2015 open enrollment period. This number is not part of the total MNsure QHP enrollment count stated above, but a 3.5 percent premium withhold from these dental-only plans will contribute to MNsure’s revenue stream.