UPDATED: HC.gov should be about 7.45M thru 1/30...and my State Level Projection Adjustments

UPDATED: OK, the actual report won't be out for another few hours, but according to Alex Wayne of Bloomberg News,

I'm assuming that "nearly 10M" only runs through Friday the 30th (the weekly HHS reports always run through the previous Friday). I projected crossing the 10M path the following day (Saturday). The 7.5M and 2.4M figures (9.9M total) are obviously rounded off, so the total could be as high as 7.54M + 2.44M, or 9.98M total. Plus, of course, it's possible that they're missing a few days of data for some of the state exchanges. Tack on another 25K or so for Saturday and you're at 10M (at worst it looks like I was off by 1 day).

Anyway, I'm feeling pretty good about my projection this time around--if anything, it sounds like I undershot slightly on HC.gov (7.45M vs. 7.5?), which is fine as always.

The HHS Dept. has been releasing their weekly snapshots in the early afternoon on Wednesdays. Tomorrow, they're having some sort of press conference about it, so I'm assuming there will be more to discuss than just the weekly numbers. Other obvious topics I can think of to justify the call include:

At the state level, as I noted the other day, I'm revising my projections downward for nine states, including:

Now, if the other other 42 states were to hit my targets exactly, I'll have to knock off a half a million and revert back to my original total projection of 12.0 million even.

However, as I also noted the other day, there are a bunch of other states (25 +DC) which have been overperforming so far (including 12 mid-sized or large states). I'm increasing my target for any state which was already at 85% of my original target or higher as of January 23rd, as follows: 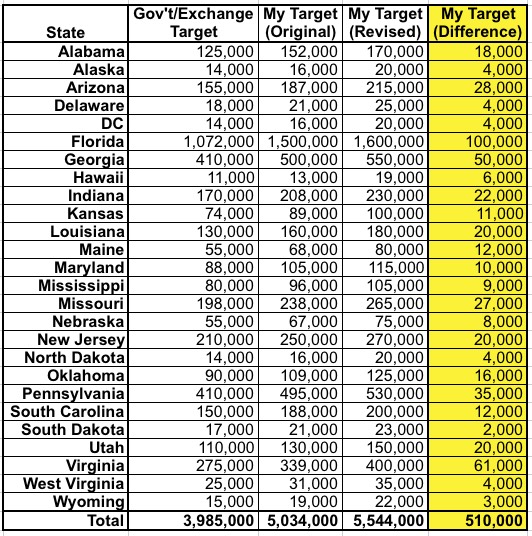 And yes, obviously there's no way in hell that these are going to exactly cancel each other out, but these are all estimates anyway, so I don't see any reason not to keep things tidy :)

Assuming things play out fairly close to the above adjustments (and the remaining 16 states hit my original targets), the grand total should still come in at roughly 12.5 million overall.

I'm leaving my original projections on the actual spreadsheet, however; there's no point in trying to "cover up" my original targets, but I'll be using this as a reference to see whether my adjustments were accurate after the 15th.