With the 1/15 deadline out of the way, the past week (and the next two) should come in somewhere between the last two: Fairly quiet, but steady and not completely dead. I'm assuming roughly 30K/day on HC.gov (around 40K/day nationally), which should have brought the total on HealthCare.Gov up to around 7.36 million as of Friday, January 23rd. 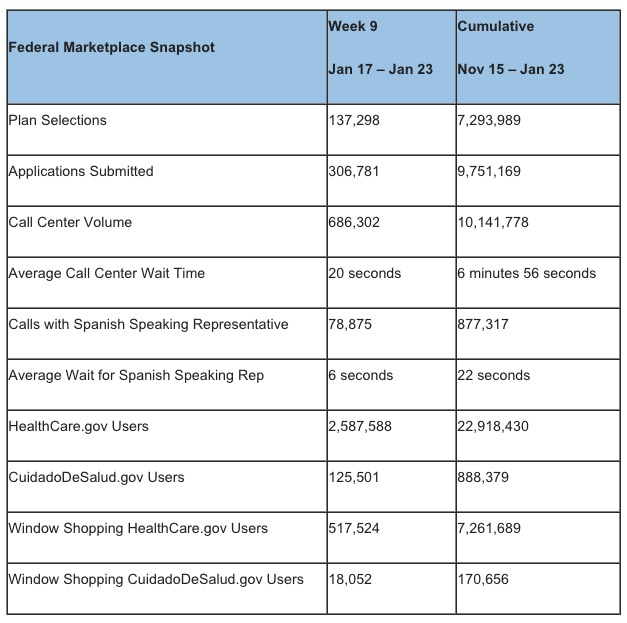 Whoops. Only 137K for the week; I overshot the mark significantly (off by 53% for the week, or about 0.9% cumulatively). The post-deadline drop-off was more significant than I figured. Crud.

Anyway, that's still 137K more to add to the total. As for the state-level breakout, whoever posted the blog entry forgot to change the Cumulative Plan Selection "thru" date from Jan. 16th to Jan. 23rd...but I'm sure the numbers are through the 23rd, because the number for every state is higher than last week's.

Actually, the numbers are so low this week (and so evenly distributed, with most states only racking up a few thousand apiece), it doesn't even change the number which have broken the HHS Dept's 2015 target; it remains at 33 states having hit the HHS mark, and the same 3 exchanges (Alaska, DC and Hawaii) having reached my own, higher targets.

As for this week (01/23 - 01/30) and next (01/31 - 02/06), those will likely be pretty much the same. There might be a slight bump for the current week since the 23rd itself was the February deadline for a few states, but otherwise it's pretty much dullsville until around the 7th, when things should start ramping up for the big final push.