For the past few months, the estimates of the reduction in the uninsured people in the U.S. has ranged from as low as 8-9 million to as high as 10-11 million, depending on the survey source (Gallup, Urban Institute, the Census Bureau, etc), when it was done (a lot has changed over just the past few months), whether it includes children under 18 or not, whether it includes undocumented immigrants or not and so on.

However, the official number which has been tossed around by both the White House as well as the mainstream media has pretty much settled on an even 10 million of late. It's been used in various press releases and as a talking point in Sunday morning talk shows, and President Obama even used the 10 million figure in the State of the Union.

Of course, it's hard to hit a moving target; if a survey is published in November, the survey itself was likely done as early as October (or even spanning a full quarter of the year for a rolling average), meaning that you're missing up to 1/4 of the year. Meanwhile, since most of the surveys don't include children, perhaps an extra million has to be tacked onto the total. With that in mind, I've been maintaining for awhile now that the actual total is probably somewhat higher than that...more along the lines of 11-13 million.

Well, 2014 is now completely off the books, the CBO has issued their updated report on the budget outlook for the next decade...and guess what?

By CBO and JCT’s estimates, about 42 million nonelderly residents of the United States were uninsured in 2014, about 12 million fewer than would have been uninsured in the absence of the ACA.3

What's interesting here is that the CBO's ending number (42 million) is actually 11 million higher than most of the other surveys (which started the year with the same 42 million). Again, if you include children and undocumented immigrants, the difference makes sense. However, the actual number of people who gained insurance remains 12 million net...about 2 million higher than the number which had been settled on until now.

As for the remaining 31 million expected to be uninsured by 2025, the CBO expects the breakdown to be roughly:

The 31 million people projected to be uninsured in 2025 represent roughly one out of every nine residents under age 65 (see Figure B-1). In that year, about 30 percent of those uninsured people are expected to be unauthorized immigrants and thus ineligible for exchange subsidies or for most Medicaid benefits; about 10 percent will be ineligible for Medicaid because they live in a state that will not have chosen to expand coverage; about 15 percent to 20 percent will be eligible for Medicaid but will choose not to enroll; and the remaining 40 percent to 45 percent will not purchase insurance to which they have access through an employer, through an exchange, or directly from an insurer.

Now, there's really not a whole lot which can be done, politically speaking, about healthcare for the 9.3 million undocumented immigrants. That would be a bridge too far for even many Democrats, and of course Republicans would go absolutely apesh*t if Medicaid or tax credits were given to them.

There's a simple solution to the 3.1 million in the Medicaid Gap...the remaining states just have to stop being jerks, and it's looking more like many of them (Tennessee, Wyoming, Montana, Utah, etc) might cave sometime this year, albeit via an Arkansas-like "private option" or whatever.

The 6 million who will be eligible for Medicaid but aren't expected to enroll in it...that's a combination of education/outreach and taking steps to remove the social stigma which comes with being on Medicaid. Ironically, the fact that millions of other "working poor" people have enrolled s hould help with this to some degree.

Finally, there's the dead-enders*: Those who can afford to enroll in at least a minimally-compliant healthcare policy but knowingly and deliberately refuse to do so. The CBO thinks that 12.6 million will still remain in this category 10 years from now, which may sound like a lot, but keep in mind that this is about the same number of Americans who believe that Lizard People run the country. It's around 4.4% of the non-elderly population, and 5% of the people in this country are always going to be insane, so I'm not too concerned about it. This just means that, barring Single Payer of some sort, the national uninsured rate will never fall below around 4% no matter what.

*CAVEAT/UPDATE/APOLOGY: I should note that not everyone who falls into this category should be lumped in with the Conspiracy Theorists or Tea Party Extremist!! crowds; some people may genuinely fall into the higher-income equivalent of the "Medicaid Gap" crowd...the specifics of their employment/income situation may make it problematic for them to comply with the law even if they "officially" should be able to afford coverage. To those who find themselves in that situation, I apologize for the generalization. 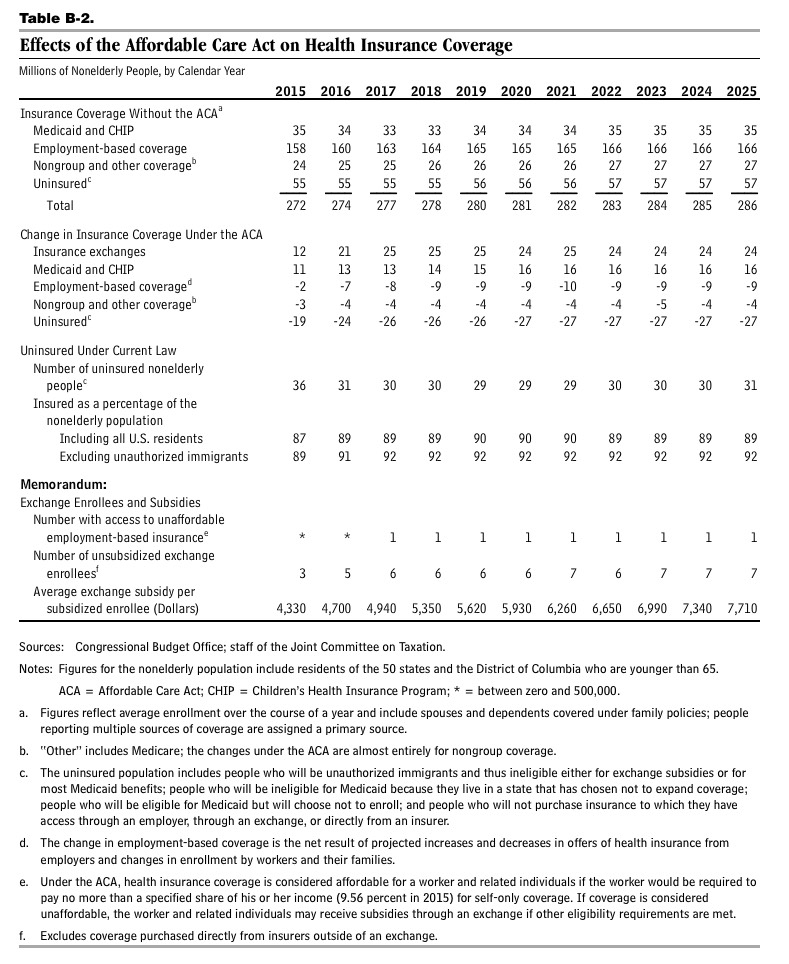 Interestingly, the CBO's estimate for new Medicaid/CHIP enrollees was actually dropped by 1 million as well (from 12M to 11M), even though by my calculations, the net increase in Medicaid/CHIP enrollment is actually already above 13 million to date. However, that includes about a million who were already transferred into/enrolled in Medicaid/CHIP before 1/1/14 via ACA provisions, and there's a lot of rounding going on here, so I guess that's no big deal.